The Oxford Police show off its upgraded station 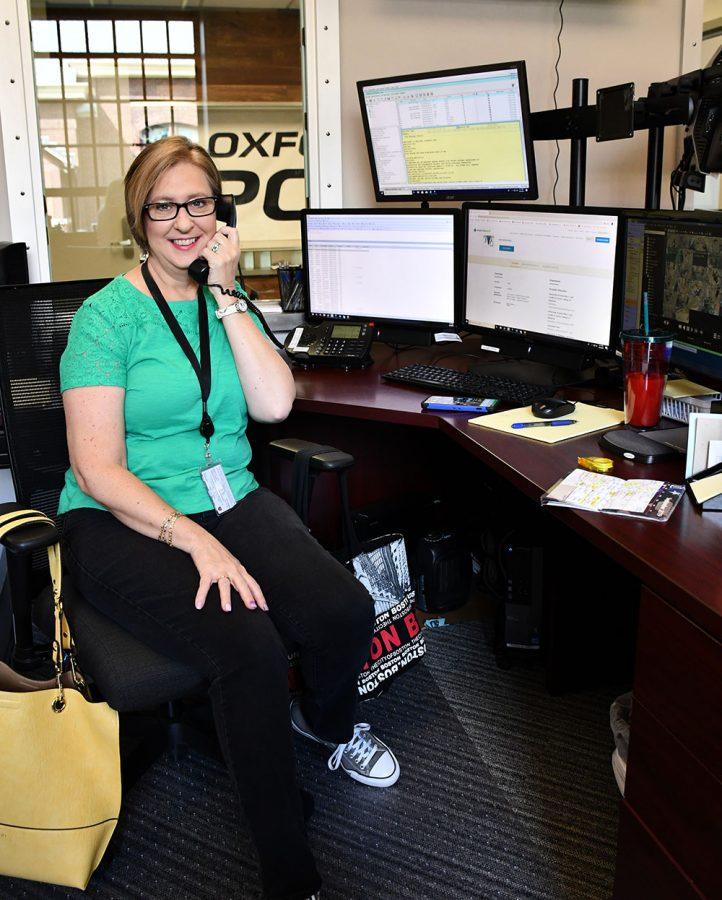 Joann Handley answers calls and greets visitors in the new dispatch room, which has a window facing the waiting area. Photo by Lauren Shassere

After years of anticipation, wondering, and wishing, the Oxford Police Department finally received the renovation it needed.

The iconic red-brick neoclassical structure at the corner of High and Poplar streets, has undergone a top-to-bottom retrofit designed to give the police the space and facilities they need. Originally built in 1939 as Oxford’s municipal building, the structure is now exclusively home to the police. Other city offices were moved to South College Avenue and the $3.74 million renovation began in 2018.

Construction was finished in July, followed by the moving in process. Fening said she has been giving tours of the new space almost daily for the past few weeks.

In almost every area of the department, there has been a revamp or upgrade for the staff. The front lobby has two dispatch windows and the back lobby is used for police storing reports and records.

“We are trying to control who uses the bathroom in the back lobby, so we keep the door closed most times,” said Fening. “You know…especially for the weekends.”

The lobby leads to a kitchen, a squad room for the officers to hold their daily briefings, and a large conference room that can be used for press conferences and other events.

The bigger squad room gives officers more room to do their paperwork and complete other tasks when they are not out on the street. The station also has a laundry room, locker rooms and showers.

“You’ll find officers using the workout room at all hours of the day,” said Fening. “It’s not like your typical work day, where you go… 9 to 5 and work out after. Some will be in here at three in the morning.”

The new property and evidence room is plenty spacious for Property Officer Perry Gordon. The room is equipped with new cubbies to hold evidence and a drying cabinet.

“The four of us would’ve been a crowd in the old property room, it had the same floor space – but so much stuff…cabinets, refrigerators, random things,” said Gordon, who was previously in an old jail cell. “I don’t miss a thing about the old room. But I do have the key to the old jail cell!”

To add to the safety and practicality of the new building, the police department added a new sally port garage. Here, officers can now call to dispatch, pull into the garage and safely lead prisoners directly to their cells, rather than having to get them out of a police car in the alley and walk them inside the building.

“The sally port garage is really helpful,” Fening said. “It’s safer, more secure. We just have to get used to the new controlled access—which is in almost every room in the building.”

The cell room has been revamped with new floors and a new paint job. Here is where you can find paperwork, the breathalyzer for DUI’s, a fingerprint scanner, boxes for urine samples, mugshots, processing areas and benches.

The cells contain benches and toilets, but no toilet paper—as a means of not allowing prisoners to stuff the toilets.

The station also has two new interrogation rooms. One room is equipped with a standard desk. The other has couches and chairs for more sensitive interviews.

Amy Gabbard, the office manager, has a spacious desk that sits right between the administrative and detective hallways, allowing her to greet people entering through the glass doors at the top floor’s marble entryway.

“Having worked here for 20 years, and never thinking [the renovation] was going to happen, just the fact that it happened…and that we got to see it during our tenure, is so exciting,” Gabbard said. “It was in the works for a long time.”

Although the the space for police has grown, Fening and Gabbard don’t see the possibility for increasing the amount of staff any time soon.

“The budget for personnel expenses usually makes the call on new hires. We have the room, we just don’t have the budget,” said Fening. “Most of the city budget is police and fire—public safety—and most of that budget is personnel costs.”

Fening said police officers are still getting used to having two floors and being spread out. “There are just new processes we are working through.”

Fening said she herself is still getting used to having an office located in the administrative hallway, which is located upstairs.

“I’m very social so I liked having people around, but I do get a lot more done in the quiet,” she said. “I miss the intimacy of the old building…coworkers stopping in. It’s not as convenient for them to stop in anymore because my office is upstairs – I don’t see as many people. I don’t get to talk to the dispatchers as much.”

Even so, Fening is thrilled about the renovation. The increased square footage improves the efficiency of the operations, and she said officers are slowly adding some personality to the new spaces.  “We’re excited to decorate, because I think we are going to do a lot of photographs,” she said. “We’re getting a little creative, because it’s pretty sterile right now—pretty plain,”

The police station is open to the public 24/7, and the officers encourage people to stop by.