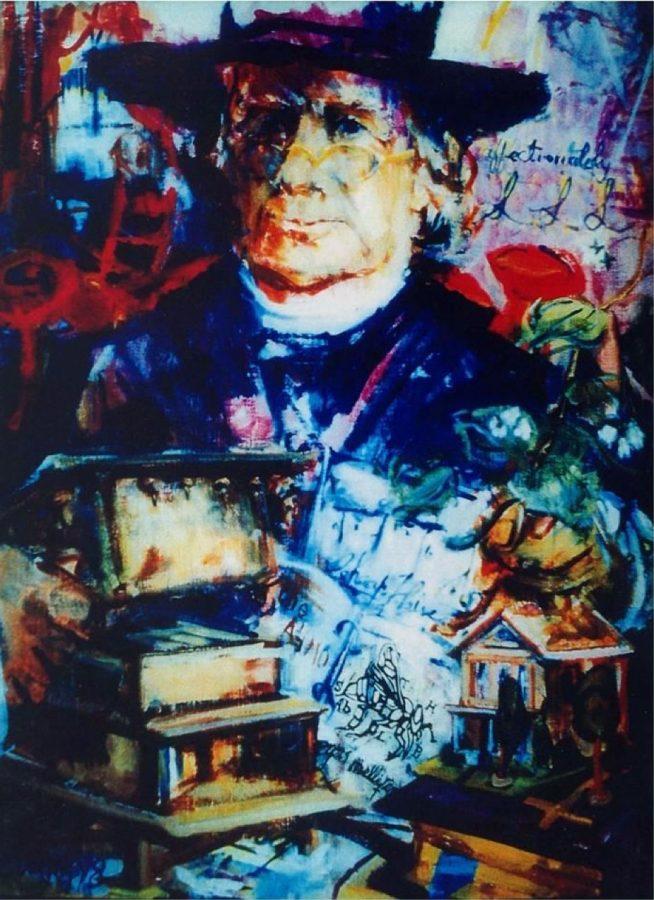 Lorenzo Langstroth, the father of American beekeeping, in a painting by Miami Art Professor Crossan Curry. This portrait hung in Miami’s Langstroth Cottage, but went missing several years ago. Have you seen it? Photo courtesy of Alexander Zomchek

A portrait of the “father of American beekeeping,” Lorenzo Larraine Langstroth, disappeared from the wall of the Langstroth Cottage on Miami University’s campus in 2011. Eight years later, the painting is still missing.

In 1831, Langstroth graduated from Yale University, he then became a Congregationalist pastor in Massachusetts. In 1848, he returned to his hometown of Philadelphia and became a principal for a girl’s school. While in Philadelphia, Langstroth began his development of a complete beehive with movable frames and received a patent for this design in 1852. He continued to manufacture these hives until his design was copied and sold. This left Langstroth years of unsuccessful battles trying to defend the infringement of his patent.

In 1859, Langstroth moved to Oxford and purchased the cottage on a 10-acre plot to conduct his research and breeding of honeybees on a full-time focus. His moveable bee frame allowed the beekeeper to remove the individual frames, harvest the honey and then return the frame to the hive for the bees to once again begin working. Extracting honey from hives in the wild and from earlier man-made hives often resulted in disturbing the bees and destroying the hives.

Ultimately, the cottage became the Langstroth Cottage, a museum that not only has historical context, but has a foot in the future just as much as in the past.

A century after Langstroth’s work in Oxford, his legacy was encountered by Crossan Curry, an art professor at Miami for 35 years. Curry was charismatic and had a very deep attraction to the natural world. As the years went by and the cottage became older, Miami made attempts to integrate the building into other projects. Curry rallied people on campus to stand up for the significance of the cottage. 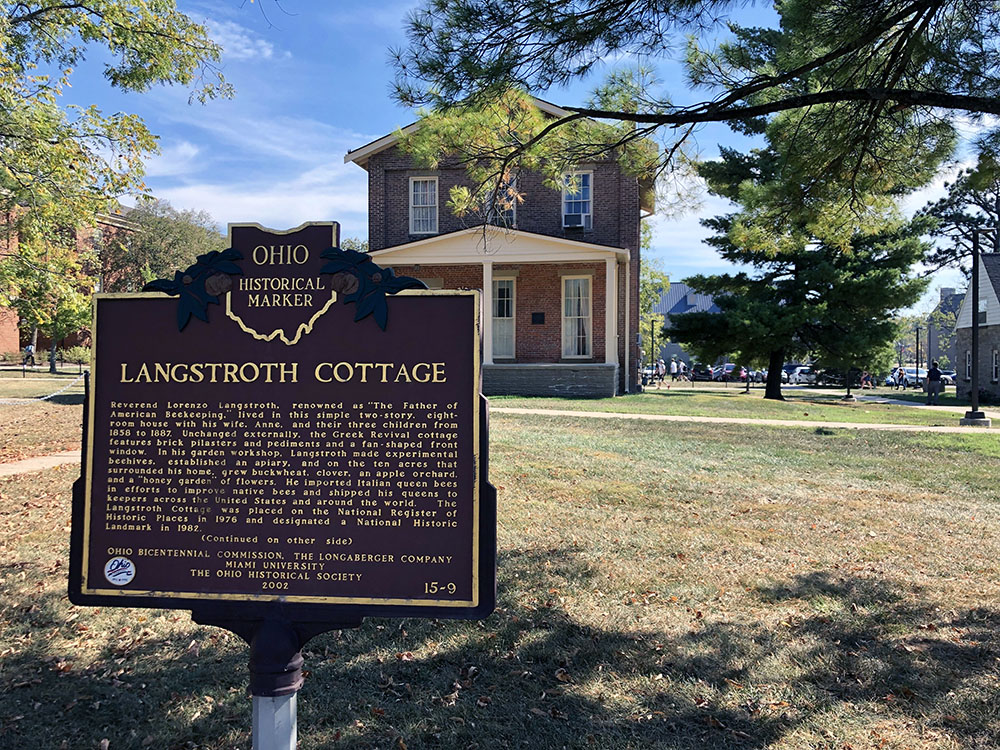 In 2002, Curry was asked to put something together to celebrate the cottage being placed on the National Register of Historic Places. Curry painted an abstract oil portrait of Langstroth, then loaned it to Miami and gave his approval to have it hang inside the cottage.

Curry’s painting hung for years, until it disappeared.

“Nobody knows exactly when it moved,” said Alexander Zomchek, an alumnus of Miami and a master beekeeper.

Zomchek developed a friendship with Curry. About six years ago, Curry called up Zomchek to talk about honeybee research and the painting of Langstroth, which was no longer hanging in the cottage. Curry was dealing with dementia at this time, so Zomchek began a search for his lost painting.

Zomchek checked the cottage, the Miami Art Museum, and even created a project for the Miami Apicultural Society to search for the missing painting. It became a hunt that only resulted in information from local people telling them to check at this place or talk to this person. But all such leads led to nowhere.

He feels that people no longer respect Langstroth’s contributions as much as they once did. He said he feels that’s why nobody remembers what happened to the painting or is paying much attention to the search for it.

The painting is done in vivid blues and reds and shows Langstroth in a broad-brimmed hat and clerical collar holding one of his hives. An image of the cottage sits in the lower right quadrant.

“The painting is so distinctive, you would know” if you saw it,  Zomchek said.

These days the Cottage houses offices for the university and in Zomchek’s view, is in need of some upkeep.

“Save the painting, but restore and keep the cottage. The modern beehive was only created once, it cannot be overstated,” Zomchek said. 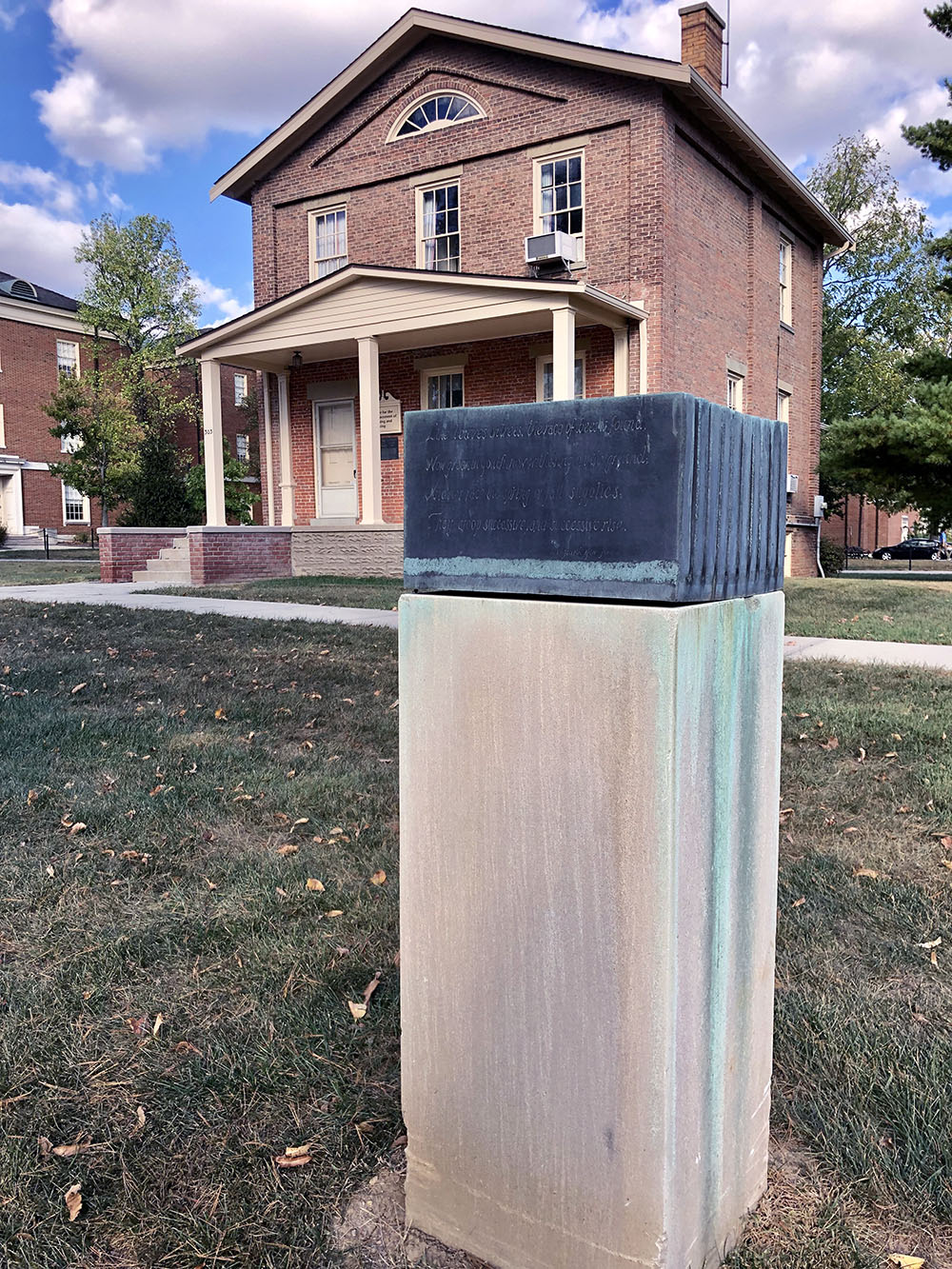 The Langstroth hive, depicted here in a sculpture in front of the Cottage, was a revolutionary change in beekeeping. Photo by Marla Chavez Garcia

Earlier this year when Zomchek was prepared to begin searching again, Curry died at age 94. His wife, Lucy, died a month and a half later and Marla Evans, who contributed to the restoration of the cottage and was responsible for the cottage gaining National Historic Landmark status, also died this year.

Curry still has a daughter living in town and Zomchek said he hopes to bring that painting to her, her family and the bee community.