By By Izzy Owen

In the auditorium of Talawanda High School, the sounds of steel drums filled the entire space. A group was finishing out the school day with Talawanda band director Mike Marston in steel band class.

The students were excited about an upcoming band concert, chattering away about their parts and what they could do to make the concert go smoothly. Within the walls that have pictures of the band through the years and trophies on shelves, it was obvious that this was a group of friends.

“Band is a huge family community and a creative outlet for students,” trumpet player and drum major Mae Evans said.

Last November, band leaders Emma Patt, Mason Schurtz, along with Evans, addressed the school board about the marching band, concert band and how they were recruiting new members to join the band. Evans even came dressed in Talawanda Marching Band’s new uniforms so that board members could see how the band was spending money. 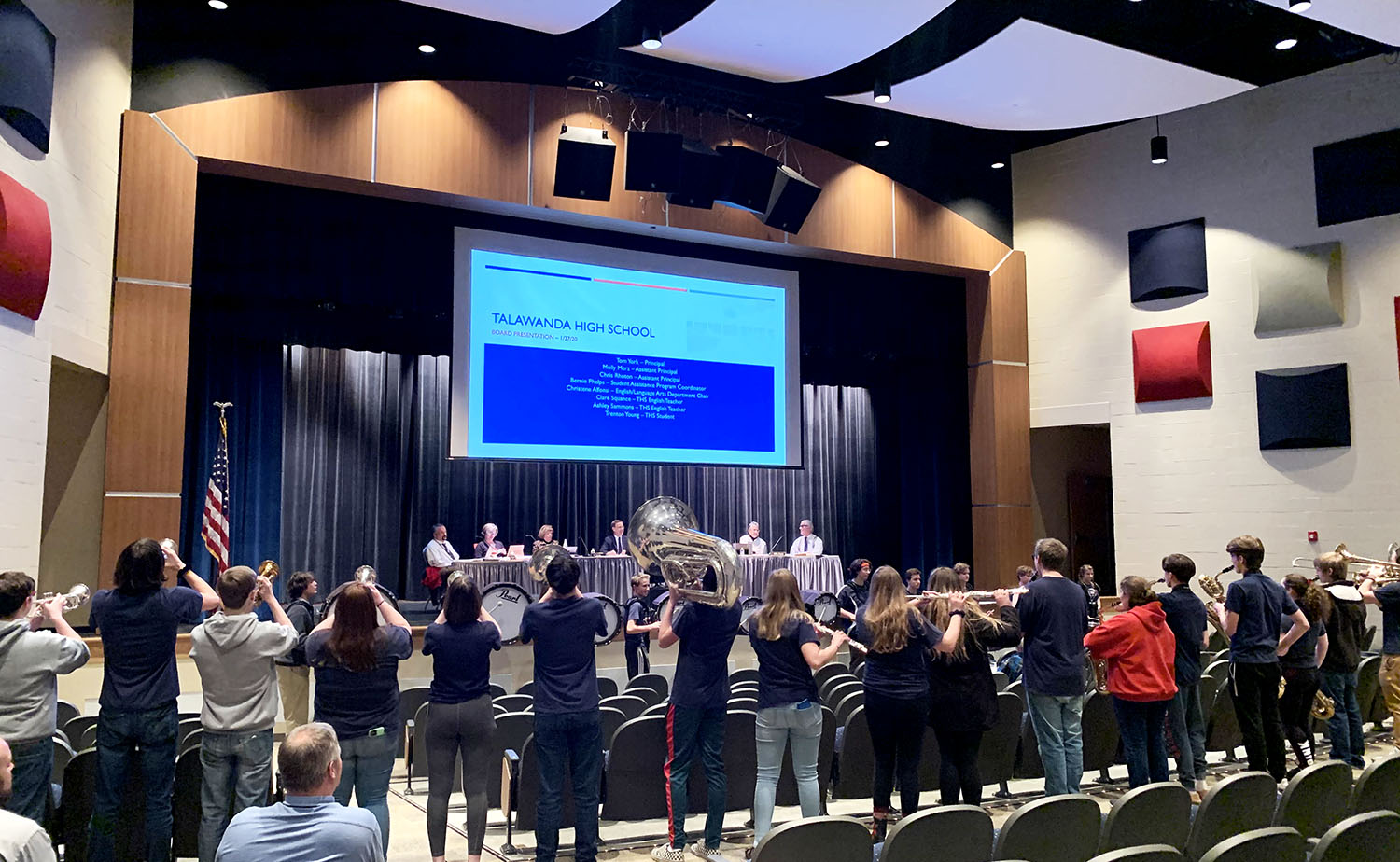 Members of the Talawanda Marching Band let the school board hear from them at Monday’s meeting, literally. Photo and video by Lexi Scherzinger
‍

Members of the band returned to entertain the board and members of the public with the school fight song and then were marched out by the drum corps at this past Monday’s school board meeting.

The idea to have the band present at board meetings came from Glenn Patt, band booster president. Marston agreed that having the board hear from the band would be a good idea because the board hears from the athletic director at most meetings. He wanted the board to hear from the students directly.

“I think getting ourselves to a school board meeting is important for drawing attention to the fact that we are a part of the school. It’s important for us to get out there and represent ourselves,” Evans said after the November meeting. 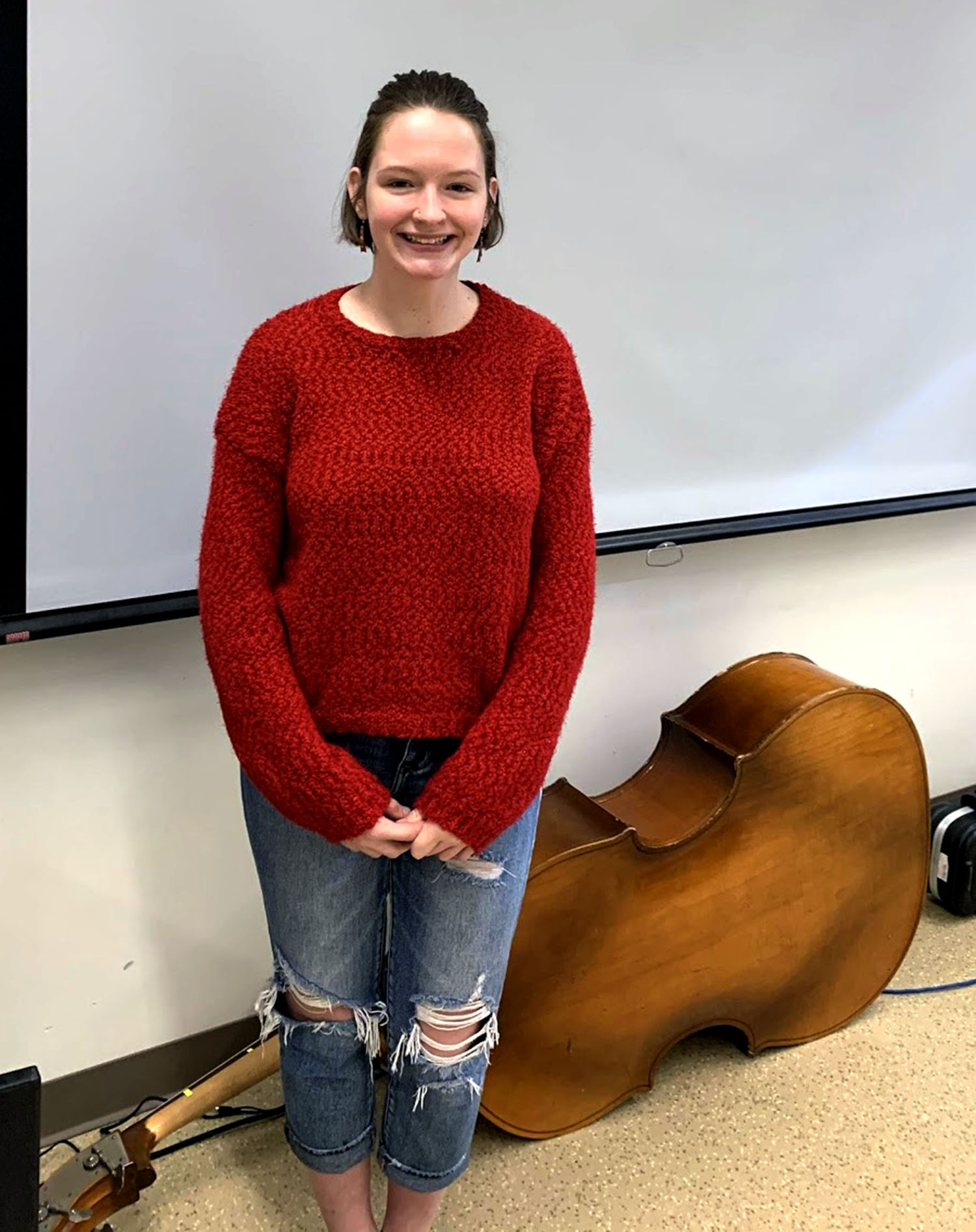 Former Talawanda and band member, Gus Lake, agreed with Marston and the need for the band to be heard.

“I think it’s very important for the board to hear from the band because music programs and arts programs are the first to be cut when the school has budget issues,” Lake said.

Marston said that the majority of Talawanda’s band funding comes from fundraising by the students and boosters. The band doesn’t buy instruments in a set all at once and typically does not buy new. He noted some instruments came from the Bluecoats Drum and Bugle Corps. The band is always looking for funding so that they can go to different events and buy new instruments as needed, he said. By going to the board meetings and being seen, they hope that they will inspire more funding.

“We still require funding. We probably require the most funding out of all of the programs here,” Evans said.

As he considers other ways to boost the band, Marston said he is considering a “signing day” celebration for students involved in the arts. A signing day is traditionally for students who are signing with a college where they will play sports. Marston and other art teachers at Talawanda have proposed a signing day for those students accepted into college music and arts programs. 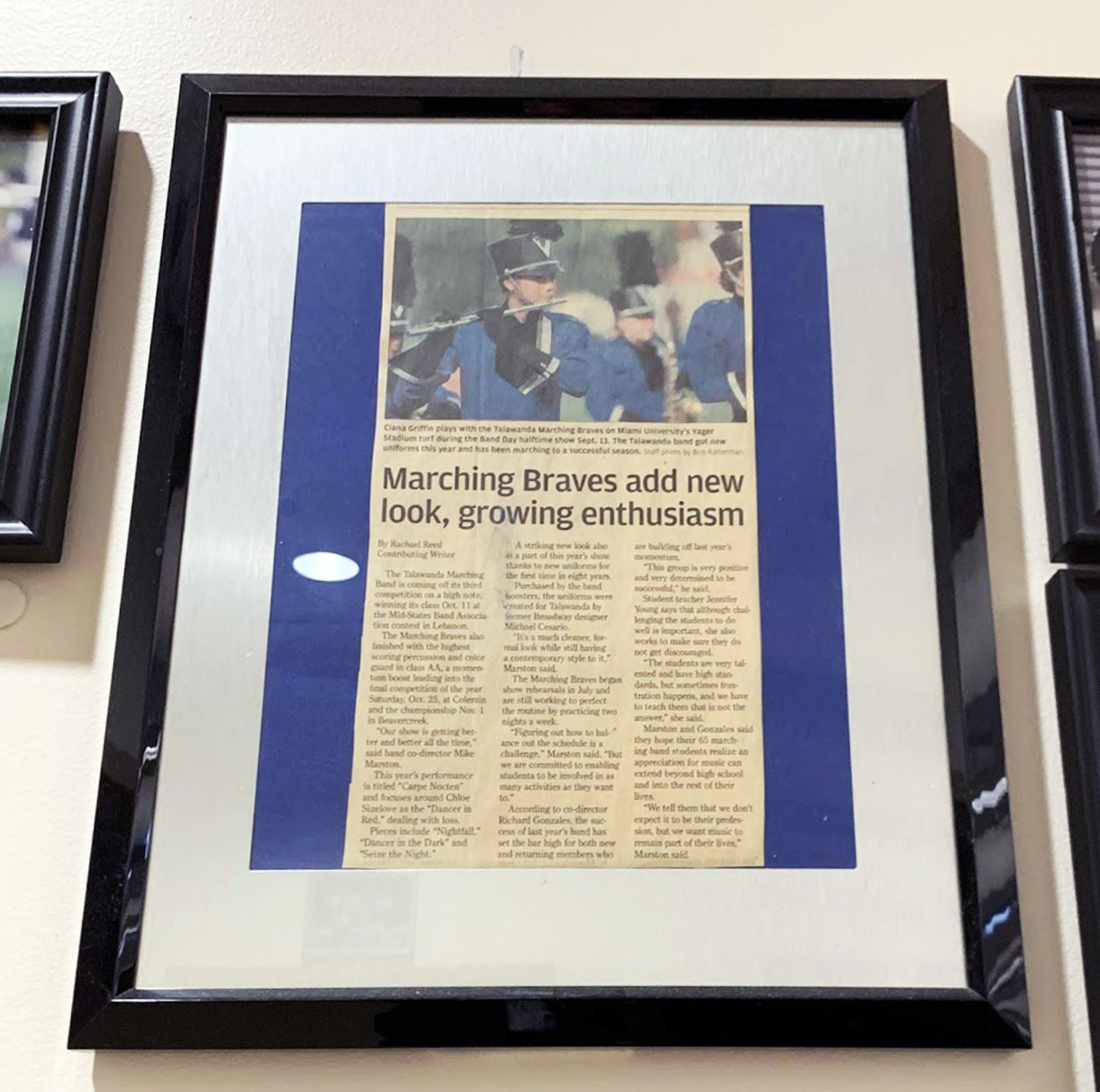 Photos of past band students and an article hang on the wall in the band room. Photo by Izzy Owen
‍

“Nobody has any reason why it wouldn’t be a good time to start having a signing day,” Marston said.

As for the future of Talawanda’s band programs, Marston is optimistic.

“I hope we continue to grow. We are looking every year to make changes,” he said.

Although she is a senior, Evans wants to see the band continue to expand as it works hard to promote the program to younger grade levels.

“Talawanda as a band in the future has so much potential. I hope that we keep getting bigger.”