Talawanda School District’s annual report card from the Ohio Department of Education revealed that its students met “basic expectations” on only one-third of the standards the state uses to measure achievement.

The annual report card was released in September and ranks districts in six categories to assign an overall letter grade. In this year’s report card, which is based on data from the 2015-16 and 2016-17 school years, Talawanda drew a B grade overall, but a C in the “Achievement” measure.

The “Achievement” grade is based in part on 24 “indicators,” which include the passage rate for state tests in each grade and subject, as well as chronic absenteeism rates and an analysis of services for gifted students. Talawanda notched the passing grade of 80 percent in only eight of those indicators.

Joan Stidham, Talawanda’s director of teaching and learning, said the district is currently studying trend data based on the report cards.

“We are taking it one level deeper to look at, ‘Maybe we’ve missed the indicator in 2018, but are we improving every year, or did we meet it last year and this year we didn’t?’” Stidham said.

Talawanda High School principal Tom York said part of the difficulty in evaluating trends is the “moving target” of what the state considers a passing grade. In years past, districts have met a testing indicator if 75 percent of their students scored “proficient” or higher on that test. Now, the minimum required score is 80 percent, meaning it’s harder for districts to meet the standards.

“The state Department of Education has a way of doing that,” York said. “It is what it is. We’ll use this information to guide how we get better.”

Chris Woolard, the Ohio Department of Education’s senior executive director for accountability and continuous improvement, said that the fluctuation in standards is the result of changes in the state standardized tests themselves. As Ohio legislators announced and then implemented new tests, which were built with “higher expectations” for students, they were forced to calibrate the corresponding standards.

Traditionally, Woolard said, districts have performed well on the “indicators met” metric. But the past several years, he acknowledged, scores haven’t been as high—this year, the average number of indicators met by Ohio’s 608 districts was just over eight.

“If Talawanda is pretty close to all the indicators and doesn’t meet them, should that necessarily translate to an F?” Woolard asked. It is, he said, a “fair conversation” to have, and one being undertaken by state officials.

In the meantime, Stidham said, Talawanda is focusing on improving its English language arts scores. This year, the district failed every indicator in the subject, meaning that the percentage of its students who passed the English language arts test didn’t exceed 80 percent—from third grade to high school.

Changes to the district’s English language arts curriculum are in progress, Stidham said, and officials hope that aligning the curriculum to state standards will boost scores.

While Talawanda consistently outperformed the state average on the subject tests, Stidham said district officials place greater emphasis on how its students fare in comparison to those in 20 “similar districts,” a field designated by the Department of Education based on demographic data.

“We expect to be above the state average.  We are not always, but we expect that,” Stidham said. “The bar is a little higher for similar districts.”

York said he most often compares Talawanda’s performance on the state report card to those of four other local districts—Lakota, Monroe, Ross and Edgewood. (Only Monroe is categorized by the state as a demographically “similar district.”) 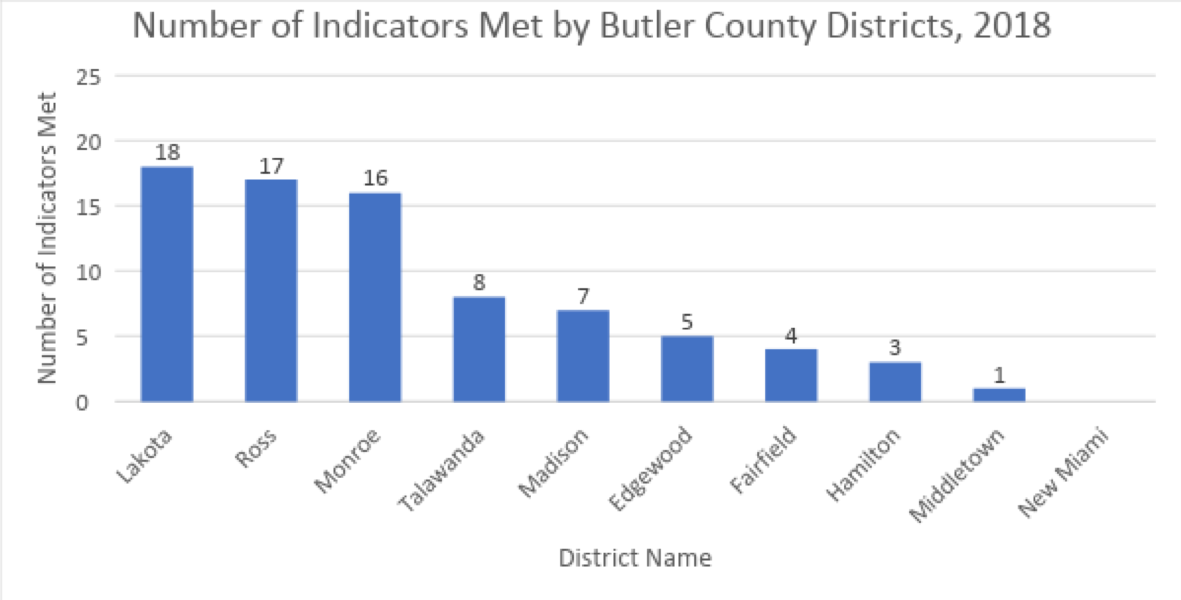 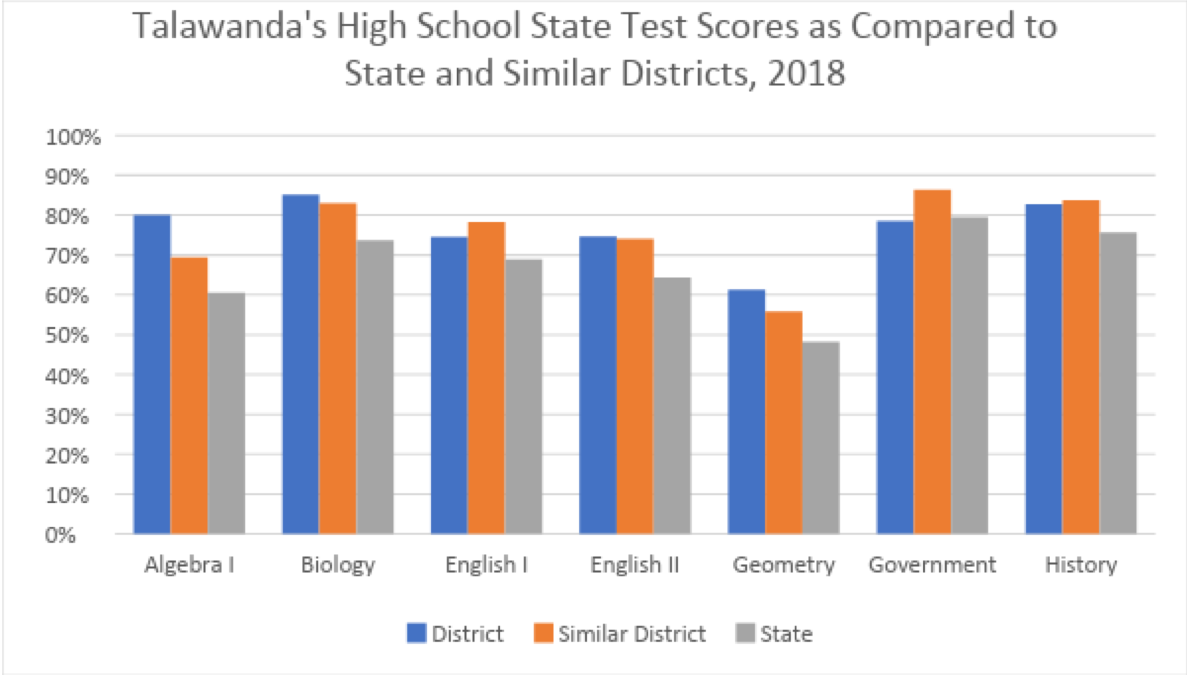 This graph shows how Talawanda high school students’ scores on each subject standardized test fare in comparison to students in similar districts and the state averages. Source: Ohio Department of Education

For York, though, the number of indicators his district meets is just one measure of learning and engagement in students.

“We’re not emphasizing test scores, but we’re using test scores as a measure as to what kind of job we’re doing getting across the subject matter to the kids,” York said.

Talawanda High assistant principal Molly Merz added that her staff tries to balance an emphasis on testing with other educational goals.

“We’re not teaching to the test because we want students to grow academically and we want to challenge students and enrich their knowledge base,” Merz said. At Talawanda, she said, “teachers are looking at creative ways to address the standards and therefore, hopefully improving our scores in those end-of-course tests.”