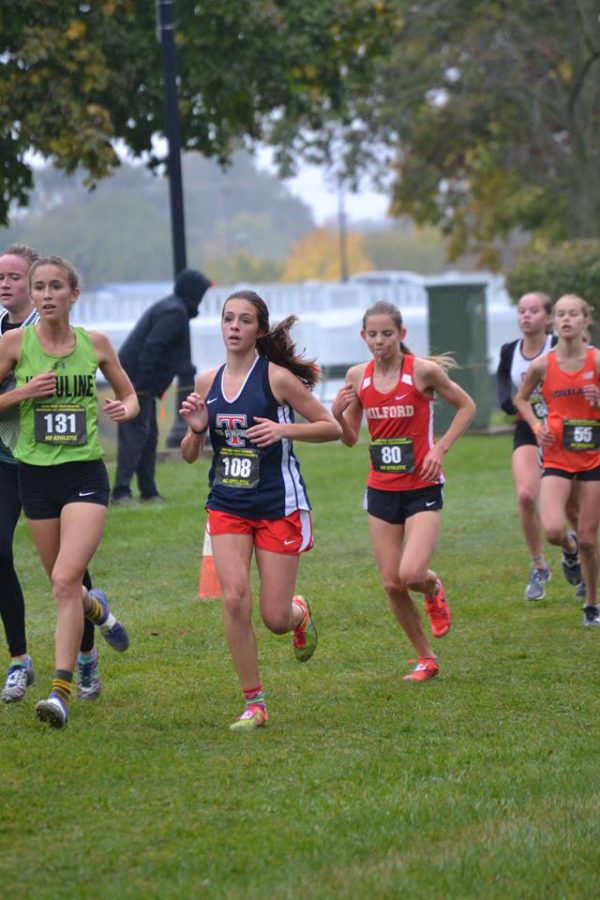 Maddy Iden began running in seventh grade on the track and field team after her parents forced her to get more involved in school activities.

It was not love at first stride for Iden, but now, four years later, The Talawanda High School sophomore sees the sport as a very important part of her life.

On Oct. 27, Iden became the first individual runner from Talawanda High School to qualify for the OHSAA Ohio Cross Country Championships since Jesse Rhodenbaugh in 2000.

She will compete in the state championships Saturday, Nov. 10, at the National Trail Raceway in Hebron, Ohio. The championships had been scheduled for November 3, but were postponed due to flooding on the course.

For Iden, running has allowed her to build stronger relationships with her family and teammates, all while relieving stress and taking part in a fun and supportive atmosphere.

On October 27, Iden competed with the best runners in the region, running a time of 19 minutes and four seconds in the five-kilometer race to place 19th at the OHSAA Troy Regional Meet.

Five-kilometer races are 3.125 miles long, meaning that Iden ran an average pace of six minutes and eight seconds per mile.

Saturday’s trip to the state championships has only been possible through a journey of development and Iden’s commitment to her training.

Assistant coach Matt Cyra has been with the Talawanda track and field and cross country programs since last spring. Even in his short time with the team, Cyra knows what has led to Iden’s success.

“She had a lot of success in the spring during track season as a freshman and has only progressed more during cross country,” said Cyra. “This is due to consistent training all year and having great teammates to train with and support her.”

“The secret to Maddy’s success is that there is no secret,” said Head Coach Paul Stiver. “The secret is that she has worn off the rubber from the bottom of her running shoes.”

Stiver said that Iden has been running 35 to 40 miles per week since late summer.

In a week without races, the team completes two workouts of faster-paced running and a long run of six to 12 miles. Stiver said the team often does repetitions of 800 or 1,000 meters, which build runners’ stamina.

During race weeks, the team will only do one workout of faster-paced running. After easier runs, Stiver has the team do short sprints, called strides, two to three times per week.

Runs in the Family

Running, quite literally, runs in the family on her father’s side and with Iden’s younger sister, Lilly, who runs for Talawanda Middle School.

Lilly ran at the Southwest Ohio Conference (SWOC) Championships in the middle school girls’ two mile and won in a time of 13 minutes and three seconds—seven seconds faster than her older sister’s winning time  in 2016.

However, Iden said that a family rivalry doesn’t exist and she is excited for when her sister joins the high school team next fall.

This year, Iden has taken the next step in her development. Coming off a successful track season that saw her qualify for the OHSAA Division 1 Region 4 finals in the 1,600 and 3,200 meters, Iden knew she still had to adjust.

“I’ve tried to make sure that I’m going to bed on time,” said Iden. “This year, I also care more about it and I’m going harder in training.”

It’s all business for Iden during her races, as her mind is solely focused on the task. No voices come through except those of her coach and teammates, who are always together in a pack.

“When I’m racing, I make sure that I never feel comfortable,” said Iden. “I’m always about what’s next and my form.”

Before the regional race, Iden said that she was ranked 40th in the region, but her goal was to be in the top 24, the placing she would need to race at the state championships.

“After I finished, I didn’t know if I had qualified or not,” said Iden. “But my teammates were there cheering and being so supportive.” 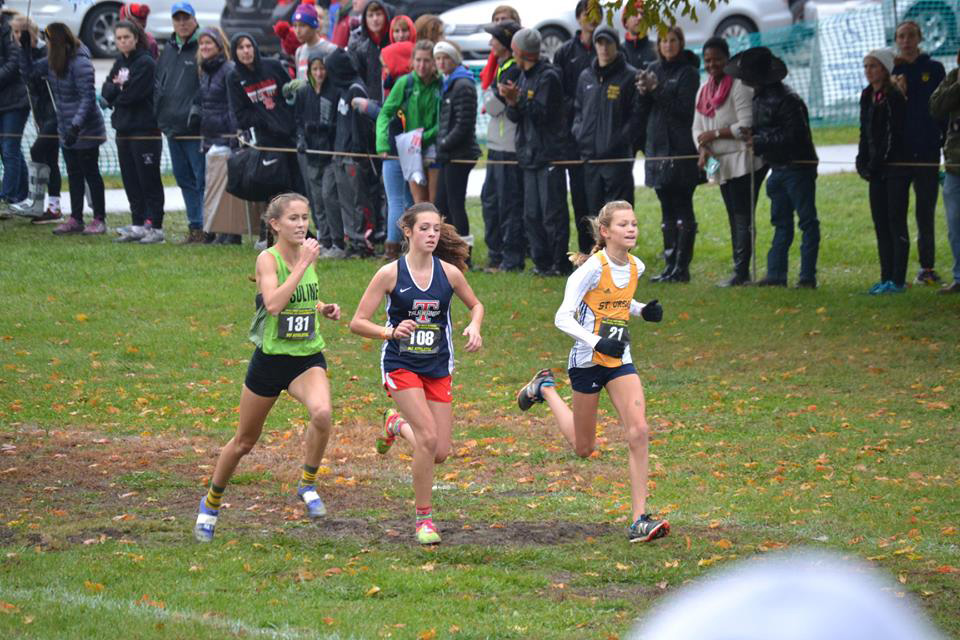 Maddy Iden, center, breaks away from runners of St. Ursula Academy and Ursuline Academy near the finish at the OHSAA Troy Regional Cross Country Meet on Oct. 27. Photo courtesy of Danielle Chaney

To make the cut, Iden had to beat her previous personal best by 19 seconds and edge out Avery Stewart of Saint Ursula Academy and Jenna Murdock of Ursuline Academy, with a few hundredths of a second to spare.

According to Ohio Milesplit, a source for high school and college cross country and track and field race results in the state, both of those Cincinnati-area schools are all-girl schools and have more than 45 runners on their team. Talawanda, by comparison, only has 39 boys and girls total.

“I passed them right before the finish,” said Iden. “My teammates said that they saw me throw some elbows.”

According to Troy High School’s boys head coach Bob Campbell, division I, II, and III teams have raced at Troy for regionals since 1985, where Talawanda runner Karen Rayle won.

Unlike track and field, where runners run around a flat, synthetic rubber oval track of 200 to 400 meters long, each course varies in cross country, depending on hills and design.

Stiver described Troy’s course, which runs along the Great Miami River, as being flat through the first two miles with a few hills in the remaining 1,800 meters.

Inspired by the Best

Winning the regional meet was Junior Taylor Ewert of Beavercreek, with a time of 17 minutes and 11 seconds, more than 30 seconds ahead of second place.

While not believing that she’s at Ewert’s level, Iden said she draws inspiration from the state’s fastest runner.

Iden has led her team throughout the regular and postseason, a season that saw great success for the young Talawanda squad.

On Oct. 13, Iden came in first at the Southwest Ohio Conference (SWOC) Championships with the Talawanda runners sweeping first through fourth individual places.

At regionals, Iden led Talawanda to place 11th out of 18 teams with a team score of 304 points. It was tremendous improvement for Iden and the Braves from last year’s regionals. The team moved up seven places in the team standings.

With all of the varsity top seven returning next year, Iden has big goals for the team.

On Friday evening, Iden will have her traditional pre-race meal of pasta and sushi. The meal has worked so far, so why change it?

Her race in the Division I state championships is scheduled for 3 p.m. on Saturday. She will be wearing bib number 1360 in box number 12. Live results from the race can be found at finishtiming.com.