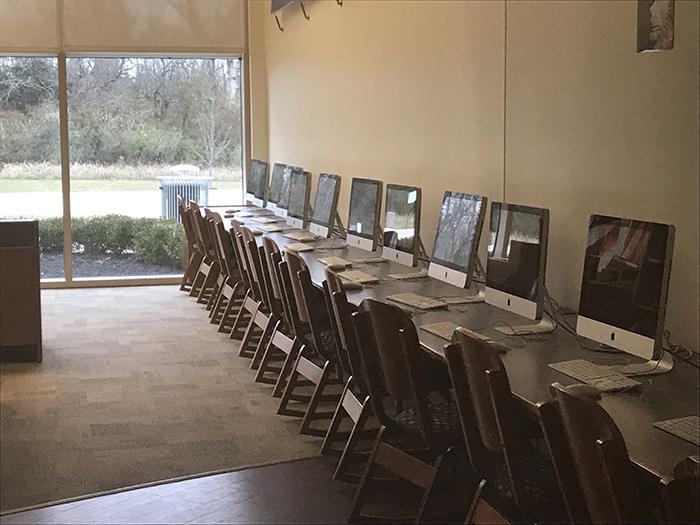 E-rate funding has allowed devices such as these computers at Talawanda High School’s media center to be connected to high-speed internet. Photo by Patrick Keck

The Federal Communications Commission’s (FCC) E-rate program, which provides funds to schools and libraries, sits on the brink of expiration in 2019 and that could have serious implications for Talawanda School District.

At this point, it is unclear whether or not the program will continue into the 2019-2020 school year, but if it comes to an end, Talawanda will lose funds that have been used for phone services, Internet, network switches and wireless access points.

According to EducationSuperHighway, a nonprofit group that promotes internet access for public education, $35 million for 195 Ohio school districts needs to be used by the end of the current school year or it will disappear.

Talawanda is among those districts and has as unused amount of $377,000. Other districts in Butler County such as Ross, Lakota, Hamilton, and Fairfield also have varying unused amounts.

Lakota has $1,533,000 at stake, the most of any district in Butler County. The amount of funds available to a district depends on the number of students on the free and reduced lunch program in the individual district.

A total of four districts in Butler County, including Lakota, have more available funds than Talawanda. Hamilton has $991,000, Fairfield has $899,000, and $469,000 is available in Edgewood. Only $122,000 is accessible for the Madison Local School District, the least of all districts in the county.

Matthew Rand, the information technology coordinator for Talawanda, said about $50,000 of the federal funds would be used to set up internet connections in the new Marshall Elementary.

The E-rate program was created as part of the Universal Service Fund under the Telecommunications Act of 1996, passed during the Clinton Administration.

Through this act, the FCC’s E-rate program “makes telecommunications and information services more affordable for schools and libraries.”

Since the program’s inception, Ohio schools and libraries have received more than $1 billion, according to the Ohio Department of Education.

Rand said that the FCC or The Universal Service Administrative Company (USAC), which works to provide internet connections to all Americans and is in control of the day-to-day operations of the E-rate program, has not released anything official regarding the termination of the E-rate program, but that it is a possibility.

“It all goes back to funding,” said Rand. “They had an original amount of money to spend, which might be ending this year. We still haven’t heard an official date or time.”

The program has been challenged over the years by Ajit Pai, chairman of the FCC, who is mostly known for his campaign against net neutrality.

Some Want Changes to the Program

In a 2014 statement, titled “Modernizing the E-rate Program for Schools and Libraries,” Pai wanted a simplified application process, funding technology for the next generations, more fairness in the distribution of funds, and increased transparency.

These changes would improve the education of all children, said Pai. “When it comes to our children’s education, we should not be afraid of the hard choices. We should not tinker around the edges. We should shoot for the moon. And we should aim to win,” he said in the 2014 statement.

Following the 2014 modernization, applicants are required to contribute at least 15 percent of the E-rate services that they purchased, up from the prior 10 percent. In Talawanda, Rand said that the district would supply 40 percent of their requested funds.

Talawanda School District Information Technology has data of how E-rate funds have been used by the district since 2014, following the program’s modernization to “expand robust Wi-Fi networks in the nation’s schools and libraries.”

In years past, Talawanda has submitted E-rate proposals for such things as internet access, wireless access points, and phone service for cellular, local, long-distance calls.

According to the district’s IT webpage, the district has mostly used category two services, for proposals of such things as network switches and power supply batteries, after 2015.

Along with the federal funds, Talawanda is also supported by service providers like the Southwest Ohio Computer Association, which serves 27 school districts and costs Talawanda $3,891 per month.

Students Need to be Connected

Mike Malone, eighth-grade principal at Talawanda Middle School, and Jim Vajda, the information technology coordinator at the time, wrote: “With digital learning, every student can access high quality and rigorous instruction in every subject, thereby, maximizing their opportunity for success in school and beyond.”

Rand said that it would be better if the program continued, but the way that technology is used today has outgrown the initial needs of 1996.