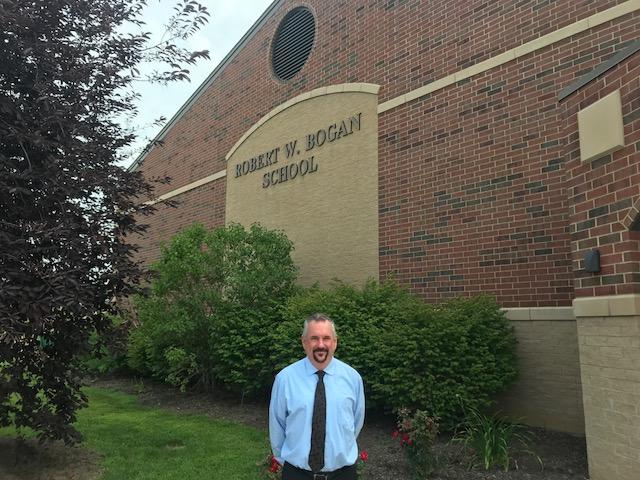 Ed Theroux stands in front of one of the three district elementary schools. Photo by Halie Barger

By by Halie Barger

In the weeks leading up to his start as Talawanda School District’s new superintendent, Ed Theroux sat in the front row of school board meetings, taking notes and listening carefully.

The district hired Theroux, former supervisor of special education at Great Oaks Institute of Technology and Career Development, in February. He officially took over from retiring superintendent Kelly Spivey on Aug. 1.

“This is an ideal situation because it’s small enough, but not too small, and big enough, but not too big,” Theroux said of the transition. The size of the district does not preclude “actual input and involvement in the day-to-day activities,” he said.

Theroux said he feels that he will do his job best by first getting to know the staff, students, administrators and parents who make up Talawanda.

School safety has been a top priority for Theroux from the beginning. “I want to jump on those safety issues to get us ahead, and really do better with it,” Theroux said.

The district has planned a mock bus crash to see how well they can work with local authorities and safety resources, and what they can improve about their response plan. Another issue Theroux took note on coming into the district was improving the district report card.

The challenges Theroux faces are evidenced by state measures of the district’s performance over the past few years. The Ohio School Report Card will be released in final form this month, and the district expects an overall grade of C on a scale of A to F, according to preliminary data Theroux shared with school board members during their August meeting.

The Ohio Department of Education uses state test scores and other assessments to produce the report card each year. The district has consistently struggled to achieve the goal of having 80 percent of its students score at a “proficient” level on state tests in areas including English, math, and history. Although Talawanda High School student test scores improved in five of seven areas in 2017, they passed the 80 percent mark in only two. The middle school met the proficiency goal only in math. Bogan Elementary achieved the proficiency goal in none of its seven testing areas, Marshall in one, and Kramer in three.

“There’s always room for improvement, and based on the report card it looks like we have not increased the number of indicators we have met, but what we’ve done is our percentages are going up,” Theroux said. “We’re getting closer to hitting more indicators.”

Talawanda received received an A in the four-year high school graduation rate, but flunked college readiness, earning a preliminary F in the “prepared for success” category, down from last year’s D. This category includes such measures as ACT and SAT scores, the number of students taking Advanced Placement classes, and college credit earned while in high school.

Theroux has met with Spivey throughout the summer to transition into his new role as well as continuing to attend board meetings and work sessions.

“I am so impressed because as [Theroux] has been finishing up his job at Great Oaks, he has been attending board meetings ever since he was hired in February,” Spivey said.

The newest project on Talawanda’s plate is the new Marshall Elementary School.

Theroux applauded Spivey and others for their ability to build three new schools without proposing a new tax to the community or going over budget. Theroux hopes to continue on with this success.

“We want to be fiscally sound, but we also want to be good stewards of taxpayers’ money,” Theroux said.

Theroux found out about the superintendent position at Talawanda through a posting from the Butler County Educational Service Center. From there he applied, and was interviewed by a committee made up of community members, staff members and board members.

“I always knew that if Talawanda came up I would apply,” Theroux said.

Theroux attended the University of Connecticut where he acquired a bachelor’s degree in special education. Working in Hawaii from 1988 to 1995, then in Alabama from 1995 to 1996 and Connecticut from 1996 to 2000 has given Theroux diverse experiences in education.

Theroux attended Southern Connecticut University where he got his master’s in special education consultation and collaboration.

In 2000, Theroux started work with the Princeton City School District.

Theroux comes to Talawanda from Great Oaks Career Technical Education Center, where he was the Special Education Supervisor. Theroux also worked as the interim superintendent at Princeton, however felt he needed more experience before becoming full time superintendent.

“I recognized that I wanted to be a superintendent, but wanted additional skills to round out my leadership,” said Theroux. “So, I took the role of Manager of Disability Education/Special Education Supervisor for Great Oaks Career Campuses.”

“He really enjoys kids,” said Mari Phillips, associate superintendent at Princeton. Phillips first met Theroux when he hired him as an intervention specialist. “He has always had an open-door policy.”

Theroux has experienced the Oxford community firsthand as a parent. His daughter, a student at Ross Local School District, has been swimming with the Miami Makos and the Oxford Swimming and Diving Team.

“Interacting with the community, students and families through the Miami Makos as well as the summer Oxford swim team provided me with a desire that I wanted to be a part of this unique, diverse and excellent school district and community,” Theroux said.

This year will wrap up Spivey’s five-year strategic plan which will open the door for Theroux to create a new plan of his own.

Spivey, as a community member and grandmother of Talawanda students, said she is proud to leave Talawanda in Theroux’s hands after 15 years of serving the Talawanda School District.

“He is very student centered,” Spivey said of Theroux. “I believe any time you keep your focus on students you’re going to do what’s right and that’s what the community expects.”

Theroux started the school year on Aug. 15, greeting students on their first day of school.