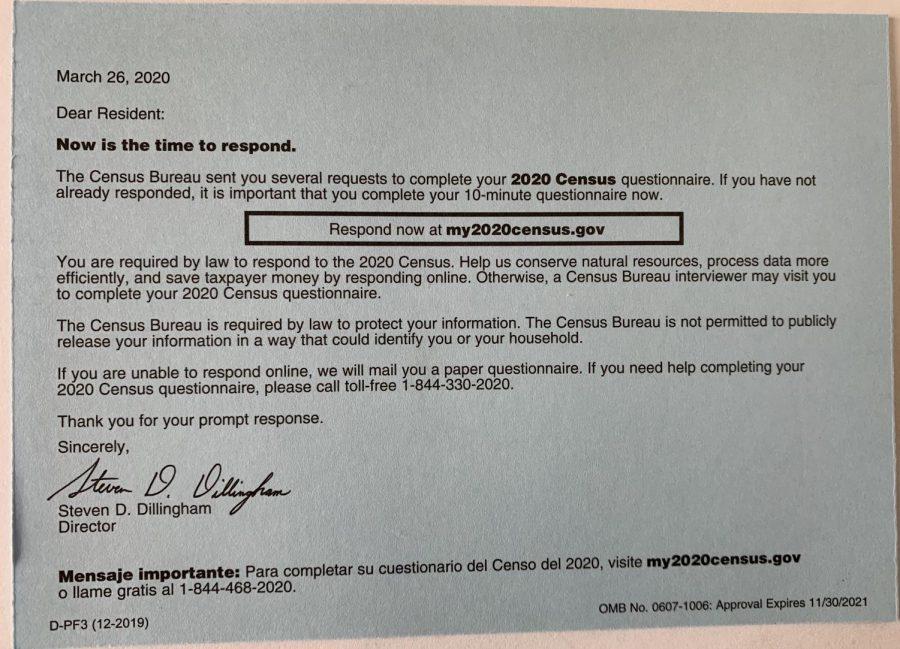 The U.S. Census Bureau began sending out postcards like this one dated March 26, to remind people of the importance of filling out a census questionnaire. Photo by David Wells.

Although many Miami University students have left campus and gone home, with the help of the RedHawks Count and League of Women Voters, this year’s federal census is still in full swing in Oxford.

“The responses to COVID-19 have definitely altered our initial plans,” said RedHawks Count representative Reena Murphy. “Initially, our mission was to meet students where they are for census education. While students were on campus, we were meeting them in student organizations, and our presentation covered the what, when, why, and how of the census.”

Now that most students have left campus and all classes are being taught online, RedHawks Count is going where they are to get an accurate count. “We’re creating a voice-over for our presentation and ramping up our personal social media,” Murphy said. “We are also hoping to work with the Provost’s Office to have professors post a census announcement for their courses.”

According to Murphy, this announcement will be tailored for students in off-campus housing. It will focus primarily on how to fill out the census form and why it is important for students who live in Oxford during the school year to be counted in Oxford, even if they have returned to their families’ homes because of the virus outbreak. The messaging is tailored to off-campus students because the university will count the students who normally live on-campus, she said.

Kathleen Brinkman, from the League of Women Voters chapter in Oxford, said she is concerned about the census response in Oxford, particularly about off-campus students. “Miami is facilitating the response for on-campus students, so that count should work out well,” Brinkman said. “Additionally, I worry (whether)  parents will understand that they should NOT count students living in their home if the student is living there now because their college has closed.”

The League of Women Voters is operating by using a lot of electronic communication, including a Census Bureau video. They have a robust Facebook, email and web presence, so they can communicate with each other. “We do look forward to a return to in-person communication as soon as it’s safe to do so,” Brinkman said.

Online communication seems to be the most common way people are communicating information on the census. Social media outlets such as Instagram provide a link at the top of the user’s feed that provides a link to the census website.

Last Friday the Census Bureau began sending out postcards to all residents, reminding them of the importance of filling out a census questionnaire, which can be done online, by mail or in person.

Additionally, last week, Miami’s  Division of Student Life sent out an email regarding the census to all students. It lets students know that the census is important for the future of Miami students because it informs local, state, and federal governments about local needs. It impacts millions of federal funding dollars for things such as financial aid, community mental health services, and research grants, as well as congressional representation over the next 10 years.