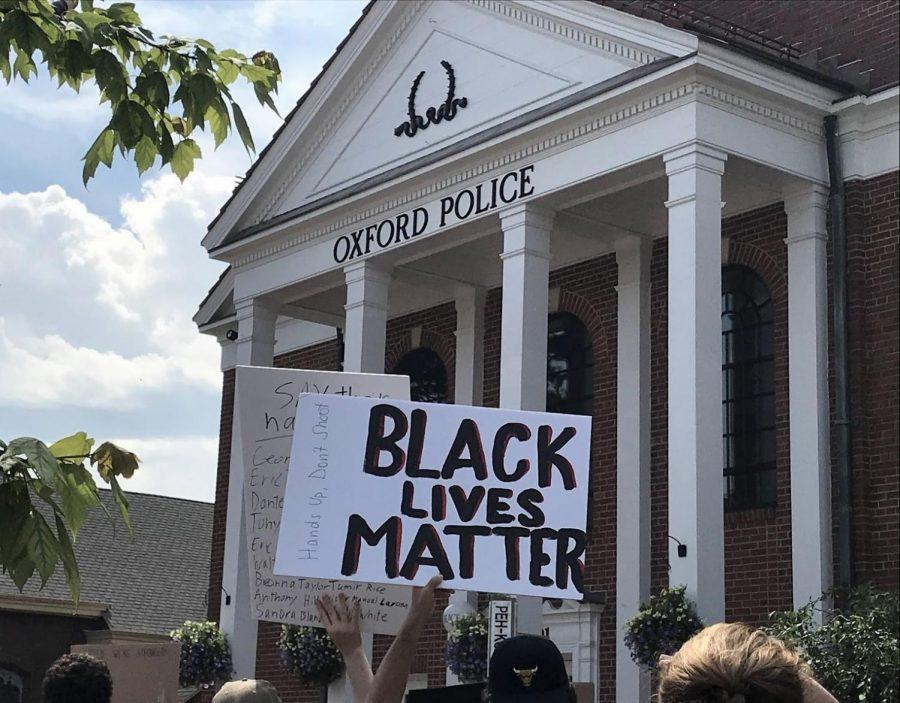 The march stopped first at the Oxford Police Station on High Street, where speakers addressed the crowd. Photo by Patrick Keck

Our already divided country broke in Minneapolis when George Floyd died at the knee of police officer, Derek Chauvin.

Now, people across the country are coming together to demand change.

In Oxford, citizens crowded the sidewalk on High Street in front of the Oxford Courthouse, Thursday morning after a two-hour march that began at Tri-Community Park and looped past the Oxford Police Department.

While walking the streets of Oxford, the protesters were embraced by passersby who honked horns and pumped fists in solidarity with the demonstration. Local businesses got involved too. A middle-aged woman stepped outside of Spring Street Treats to wave and yell thank you to protestors, and when the Fiesta Charra staff heard the chants of “this is what democracy looks like” and “no peace, no justice,” they jumped to the High Street sidewalk with cases of water in hand to distribute to the lines of demonstrators

Speeches were given by activists at the steps of the Oxford Police Department, including an address from Vice Mayor Bill Snavely, who participated in the march and assured the crowd that city council is in full support of their activism. Protesters also laid down in silence at the Oxford Courthouse for eight minutes and 46 seconds — the length of time police officer Derek Chauvin’s knee was pressed against Floyd’s neck in the Minneapolis killing.

The demonstration was organized by a group of local residents and Miami University students who saw a need to have voices heard in Oxford. It wasn’t directly affiliated with any specific local groups. 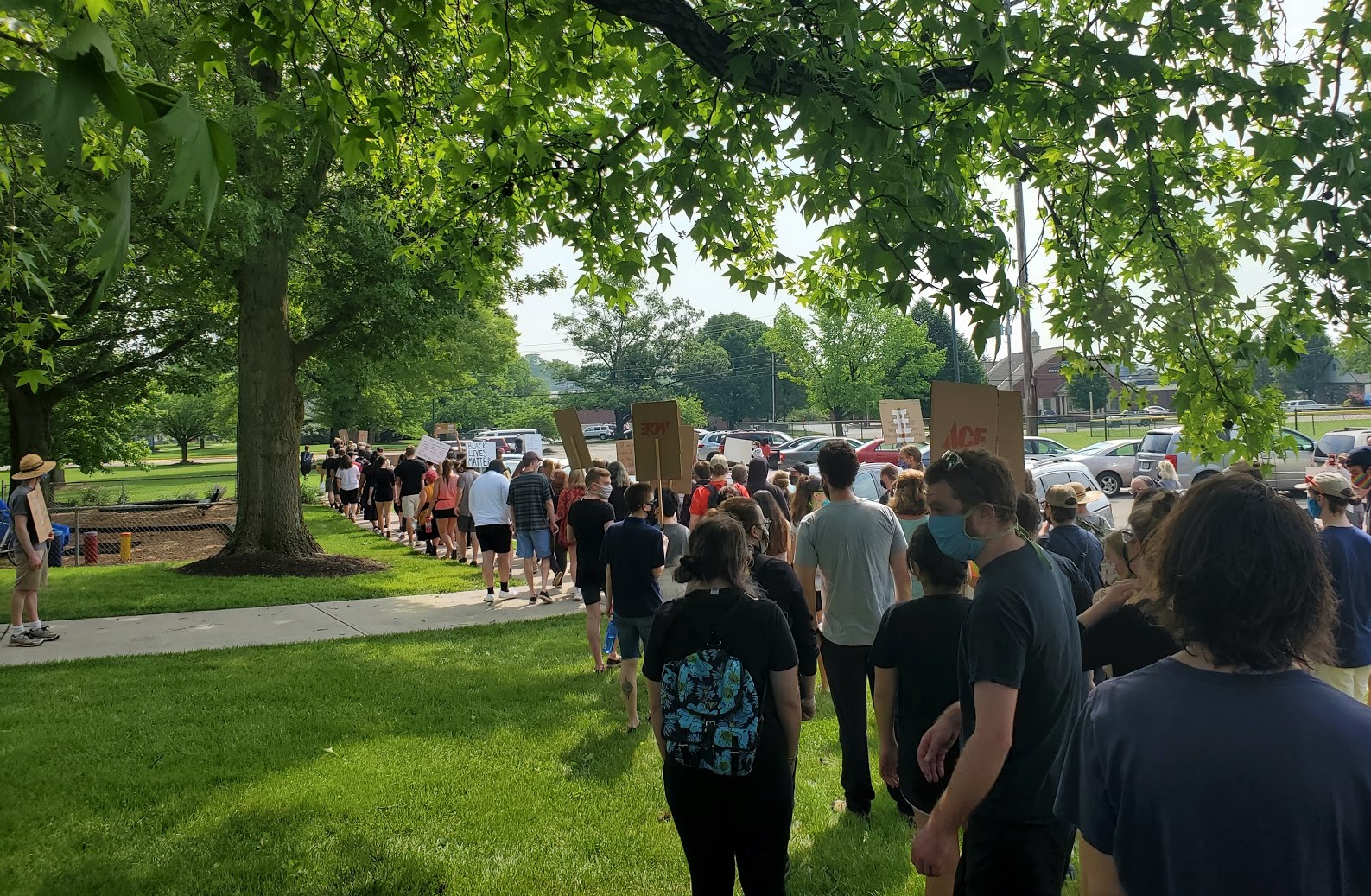 Participants gather and start their march at the TRI Community Park. Photo by Blake Boyd

Charlie Paul, an event organizer who is an Oxford resident and Miami student, said the event was organized with only a three-day turnaround between the start of planning and the march. Paul said they made a strategic decision to hold the demonstration on a Thursday because court was being held at the Oxford Courthouse.

“I find that the majority of what you call ‘We The People’ are away from the cities,” Paul said.

After marching through town  Thursday, protesters lie down for nine minutes to symbolize the length of time George Floyd suffocated with a police officer’s foot on his neck. Video by Blake Boyd

“We’re out in the suburbs, and there’s a whole entire life away from the cities that we don’t see — there’s an education that we don’t get firsthand. And I think that being vocal even in the smallest places, even the most remote places, is the best way to get our voices heard across the country. Those are the people we’re trying to appeal to when we’re protesting in those urban areas.”

Paul also added that even though Oxford is small, it can still have an impact.

“We have to make noise,” Paul said. “Despite the size of Oxford, Oxford is influential.”

Joshua Ferneding, a Miami student and local resident who marched in Oxford, said he’s been to three Black Lives Matter protests since George Floyd was killed. “There are so many people facing various injustices across the nation that aren’t going to have their voices heard,” Ferneding said. “It’s really about everyone, and making sure that we’re all on the same page, that we’re all working to lift up other people.”

For Gage Roberts, this was his fourth protest since the killing. Roberts attended large demonstrations in Cincinnati and Dayton but thinks it’s important to get small towns like Oxford involved.

“It’s important to get small communities in on it,” Roberts said. “Racial issues permeate all throughout society.” 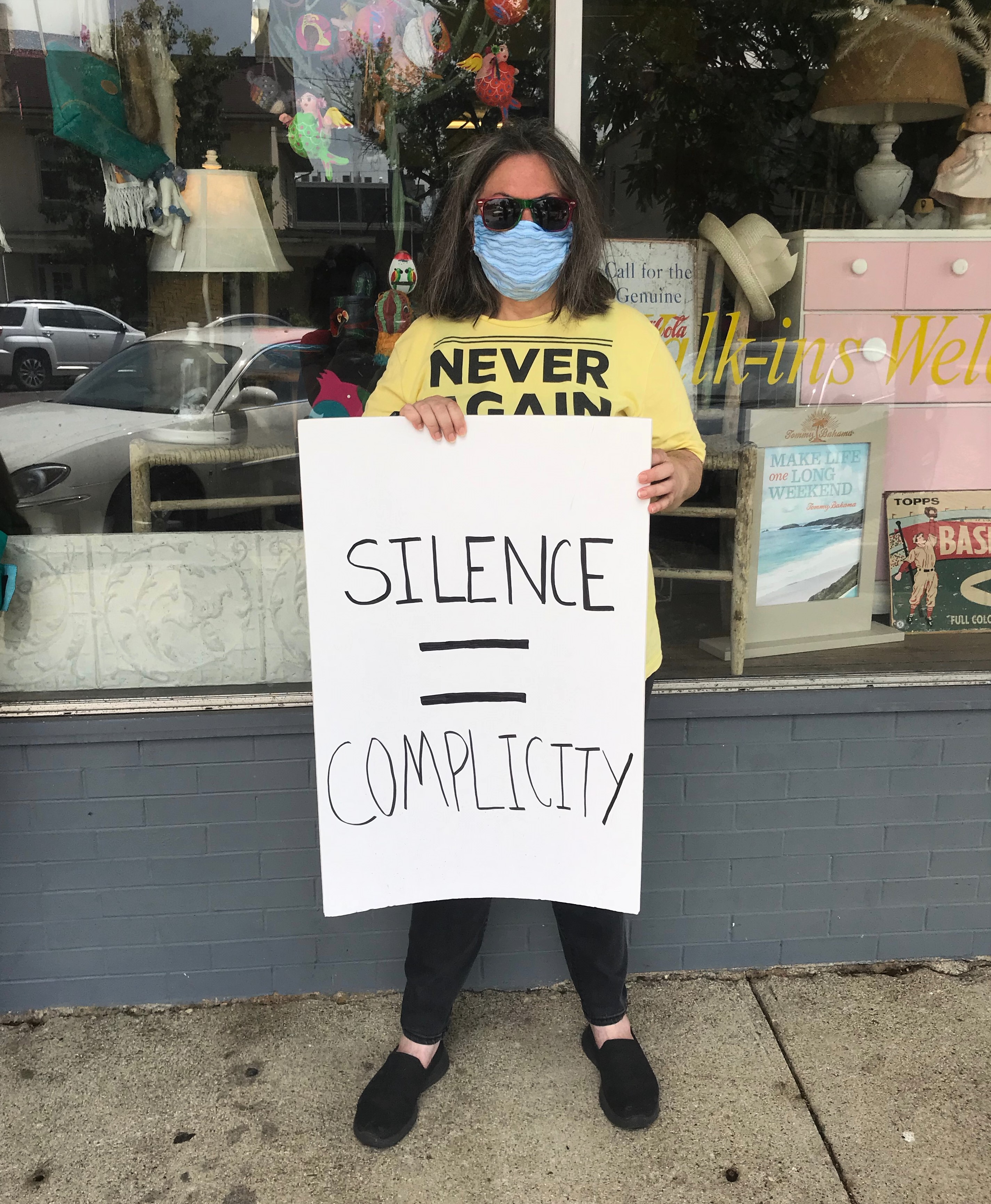 One of the demonstrators carries signs stating her goals. Most also wore masks to guard against COVID-19. Photo by Susan Coffin

Rodney Coates, a Miami professor of global and intercultural studies, wasn’t at the march in Oxford, but he was alongside the civil rights marches of the 1960s and is an expert in critical race theory, having authored “Covert Racism: Theories, Institutions, and Experiences” and “The Matrix of Race: Social Construction, Intersectionality, and Inequality.”

Coates said with the recent activism, the George Floyd killing will be momentous.

“I don’t think (Floyd’s) is going to be the last death, unfortunately,” Coates said. “But I think it’s going to be a memorable death, in that this one occurred and it seems like we turned a page in terms of how much we’re willing to take. This was the final nail in that coffin.”

Coates added, “The bottom line is that silence and complacency is part of the problem.”

Coates said he hopes the protests will help motivate people to vote and mobilize at local, state and federal levels.

“Empathy requires us to step out of our comfort zones and join hands across this country,” Coates said. “Everything is not good across America, and in these small ways we drop waters of freedom to create a river of freedom.”