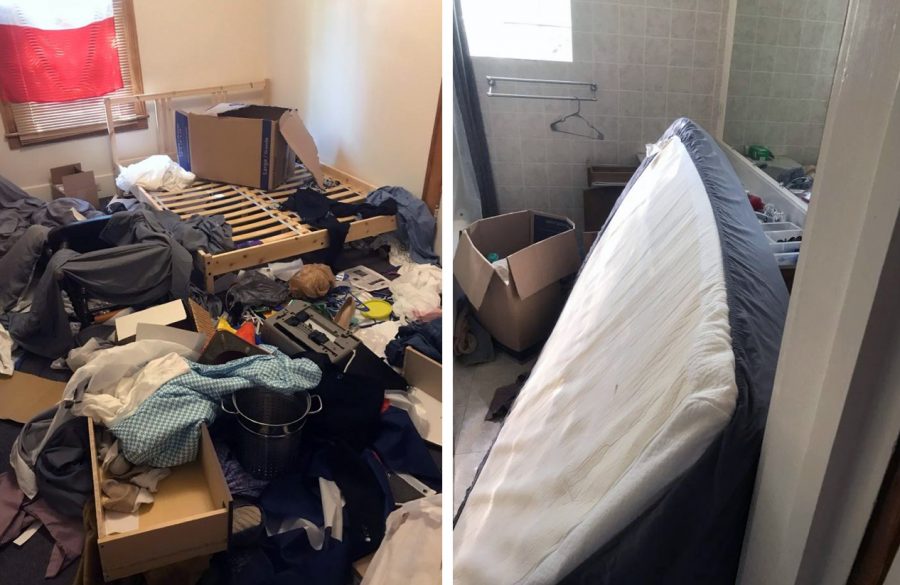 Michael Serio returned to his Oxford residence after summer break and found it had been burglarized and trashed. Photos provided by Michael Serio

In mid-August, just two weeks after his last housemate had left town, Miami University senior Michael Serio stopped by his house and found it “ransacked.” Almost all the furniture had been moved and rummaged through. Serio’s mattress ended up in the bathroom and there was half-eaten food left out.

“It looked like people had been living there,” Serio said.

He called the police, who determined method of entry, processed evidence and took statements and DNA from Serio and his housemates. Not only was there property damage, but $750 worth of items had been stolen as well.

Later that day, the burglar returned with a shopping cart tied to a bike in order to take more. Serio’s housemates called the police again and the suspected burglar , Stephen Moster, was arrested.

The extent and conclusion of this offense may be an outlier, but break-ins in Oxford are not.

Over the summer, a three-month time period, there were 21 reports of residential burglaries. Eight of these were reported in August, which is consistent with numbers from the previous two years — nine reported in August of 2017 and 10 in 2016.

Only one out of the eight burglaries reported this past August did not involve a student residence.

While Oxford Police Chief John Jones said he believes the department’s crime numbers are fairly accurate, he said some break-ins are not reported.

That was the case when Miami University senior Nick Fendinger learned that his house was burglarized in August. He received a call from his landlady in when she found the front door wide open.

Fendinger’s housemate, senior Jack Evans, was the main victim as he was the only one with things stored in the house over summer break. His PlayStation and other electronics were stolen. The thief stubbed out, cigarettes on the desk.

The incident wasn’t reported to police.

That’s not impossible, however, and there are other reasons to report incidents.

“We do encourage everybody to report because it may be connected to something else,” Chief Jones said.

A burglary case that was closed due to inactivity could be solved when another is investigated and property is found, Jones said. It’s also useful for crime statistics.

“Even if there’s no evidence and it’s just documentation, well then we have a more accurate representation of what crime is occurring in our community,” Chief Jones said.

The state in which Serio and Fendinger found their respective houses could indicate a situation of squatters —  which had been reported over the summer, according to Chief Jones —  and therefore a connection to other growing problems in the area such as homelessness due to the opioid crisis. But most are crimes of opportunity.

“Opportunistic crimes happen here in the mile square where students live and leave doors unlocked or have parties and invite people over,” Chief Jones said. As well, burglars know that student residents are largely empty during school breaks.

The Ohio Revised Code defines burglary in part by “no person, by force, stealth, or deception, shall trespass in a permanent or temporary habitation of any person when any person other than an accomplice of the offender is present or likely to be present.” This then includes intoxicated persons entering a house accidentally—a common occurrence in Oxford, but one rarely reported.

“While it’s great that we feel very safe here at Miami and Oxford, that’s not normal and that should be reported right away,” Chief Jones said.