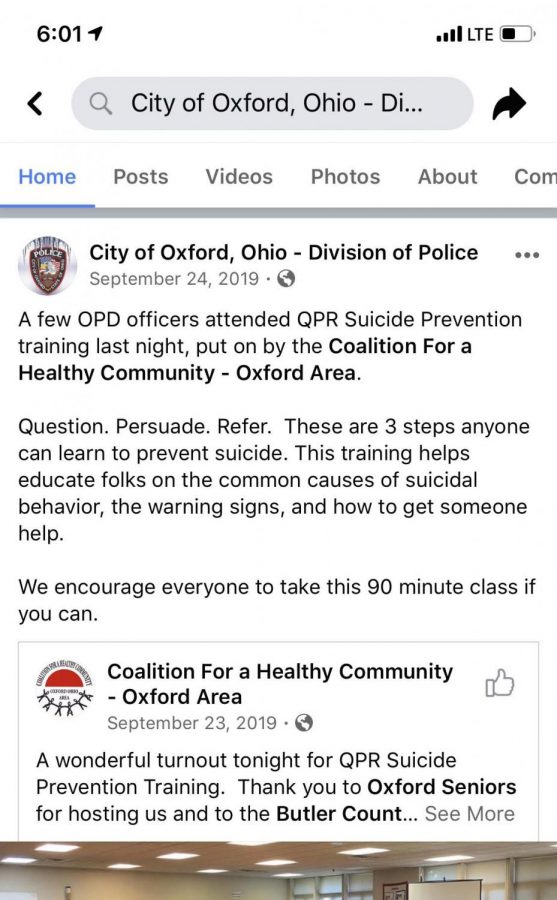 Social media is changing the way police and the public communicate.

Sometimes, cries for help are heard on social media rather than the 911 line.

On the afternoon of Sunday, Feb. 9, Oxford Police received an anonymous call from someone concerned about a Facebook post of a friend that she just saw in which the person making the post said she had just taken 150 sleeping pills in a suicide attempt.

Officers were immediately dispatched to an address on College Corner Pike, provided by the caller. When no one responded to the police knocking on the doors and windows, officers began questioning neighbors to find out if the occupant had been seen recently. They were told the woman should be home. Police then forced the door open and found a woman unconscious, with the pill bottles scattered around her.

The woman was revived at the scene and taken to McCullough Hyde Memorial Hospital, police said.

Oxford Police Chief John Jones said he was not surprised that the suicide message was posted on Facebook.

“I think that’s fairly common for people who are depressed, who are going through a rough time, to post something on social media that is concerning to others and so they (the person seeing the post) will try to reach out to that person or if they can’t get a hold of them, contact police,” Jones said. “Social media is a pretty prevalent thing, and it’s that typical call for help.”

‍According to the American Foundation for Suicide Prevention, suicide is the 10th leading cause of death in the United States. However, according to the organization’s website, the stigma surrounding suicide leads to lower reports, so the number could be higher. According to the most recent data from the Center for Disease Control, Ohio’s suicide rate was at 15 per 100,000 residents in 2018.

According to Natalie Perkins, a doctoral candidate studying suicide in Miami University’s psychology department, there are many risk factors a person can pick up on to judge whether an individual is at risk for suicide. The more specific the threat, the higher the stakes for the individual at risk, she said.

The context depends on whether or not the person has a plan in place and access to the specific materials necessary to carry out that plan, Perkins said. Suicide cases are particularly time-sensitive because there is a small window of time between the person deciding they will make an attempt, and the person actually making the attempt, she said.

“A lot of times that (the time factor) makes it really difficult for us to determine what happens right before an attempt,” Perkins said. Signs to watch out for when dealing with a person who might be thinking about suicide include changes in mood, the person being more irritable, changes in sleep, an increase in nightmares, and more, according to Perkins. In terms of social media, Perkins said the tone of posts often becomes a little more negative, anxious and angry, leading up to a suicide attempt.

According to Lt. Lara Fening of the Oxford Police Department, people are communicating with police through private messaging and on social media sites. Fening authors the department’s “Weekend Update,” Facebook post, an irreverent and effective recounting of recent police activities that is widely read in the community.

According to Fening, any time there is concern expressed about a person potentially harming themselves, the police treat it as an emergency situation.

“We handle it very delicately, but cautiously,” Fening said.

After the officers have the situation under control, Fening said, they reach out to other resources to ensure the victims are connected with the help they need. These resources include a mobile crisis unit through the Butler Behavioral Health Services. This team will come on location and evaluate a situation and determine the next steps for the individual.

According to Perkins and Fening, the first step a person should take when seeing a concerning post is to reach out to the individual, if possible, to ask directly if they’re okay.

“I would always reach out to them first,” Fening said. “Try to inquire as to what’s going on, and do they intend on hurting themselves.”

Fening said being upfront with the individual and asking them directly if they intend on hurting themselves is a crucial factor in measuring the severity of a situation. Fening said another key factor is locating where the individual is at the time of the post or incident to help determine who to call.

Perkins also said you can reach out to crisis hotlines on behalf of an individual or to seek advice on how to help an individual.