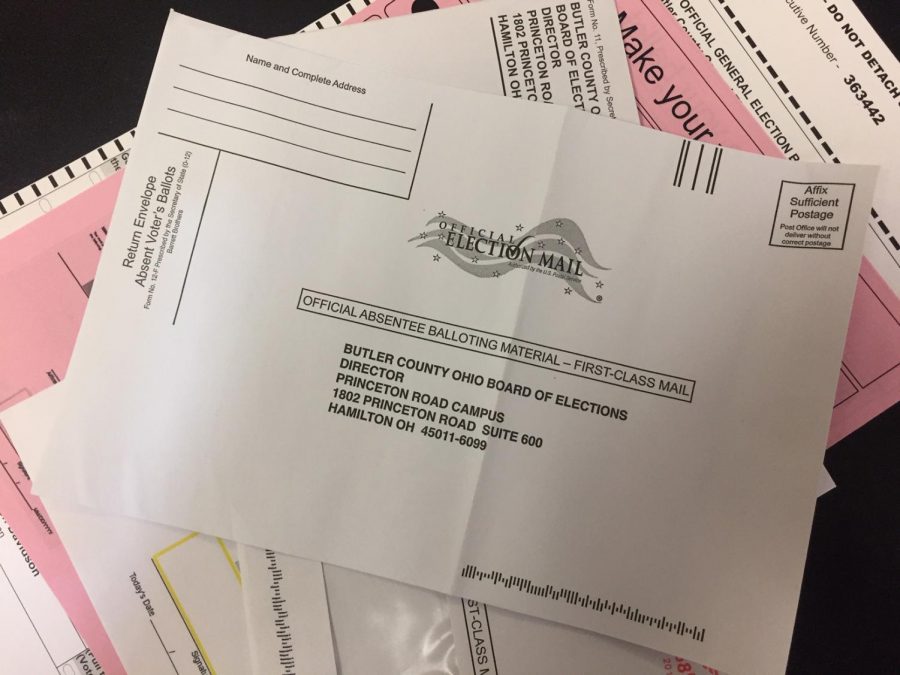 New envelopes designed to better fit absentee ballots require more postage than a single stamp. The Board of Elections says it will pay the postage due. Photo by David Wells

If you requested an absentee ballot in Butler County, make sure you stick two stamps on your return envelope. Also, be sure to write down all eight digits of your driver’s license number if you use that as your voter ID.

The absentee ballots used to come with smaller return envelopes, but that changed because of complaints from voters who had a hard time getting the completed ballots back into the envelopes, Noonan said.

The new, larger, envelopes require 71 cents in postage. You could use some lower denomination stamps, if you happen to have any around. Sticking on two first-class stamps will do the job, but will mean you are paying 29-cents more than necessary.

“It’s a Catch-22,” Noonan said. “One way people can’t get the ballots in [the envelopes], you do it the other way and people complain that it costs more money.”

The envelopes carry a warning where the stamps are supposed to be stuck saying that mail with insufficient postage won’t be delivered. But that’s an idle threat, said Noonan. She said ballots with only a single stamp do get delivered and the board of elections pays the postage due.

Early versions of the voter identification form left only six boxes to write in an eight-character drivers’ license number. The forms have been corrected and must be resent if filled out without all eight characters. Photo by David Wells

“Since October 11, the requests for the absentee ballot have been corrected and the forms have as well,” Noonan said.

Letters explaining the license number error, and corrected identification cards with room for the full numbers, were sent out to the 10,000 voters who got the bad forms. When the corrected forms are returned, the original ballots can be counted, Noonan said.

Noonan estimated that of the 10,000 ballots sent out before Oct. 11, fewer than 100 of those tuned in so far actually had a problem because most people opt to use the last four digits of their Social Security number for their ID. However, she could not say on Oct. 25 how many of total number of the early ballots had been turned in so far.

If voters are worried about the validity of their ballots, they can track them on the Butler County Board of Elections website.

According to the Ohio Secretary of State’s website, 1,053,697 Ohio voters had asked to have absentee ballots mailed out to them as of Oct. 19.  Of those, 332,663 had been cast as of last Friday. During the same period in 2018, nearly 810,000 absentee ballots had been requested and more than 272,000 had been cast, according to the Secretary of State’s office.