Sleepless in Cyberspace: Event Keeps Game Creators Up All Night 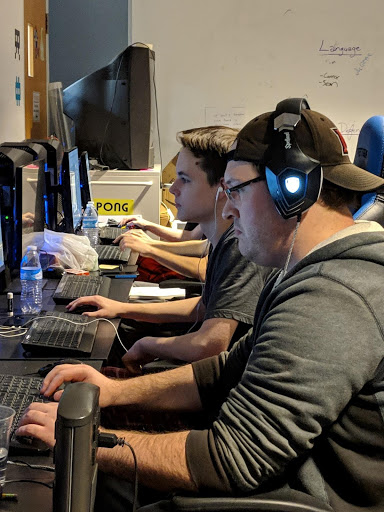 Cameron Foister and Luke Cunningham are in the zone finishing coding their game Gargoyle Condo with just 15 hours left. Photo by Rebecca Huff

Although Miami’s King Library was not open 24 hours a day last weekend, a select few stayed inside once the doors were locked in the evenings. They hunkered down in room 27 for the 48-hour endurance contest of the annual Global Game Jam.

Participants of all ages had two days to create a game that followed a chosen theme given to participants by Global Game Jam Inc., which was founded in 2008. This year’s theme was “what home means to you.”

Miami University was one of nine selected sites in Ohio to participate in the Jam. A few surrounding universities that participated included Ohio University, the University of Cincinnati, and Kent State University.

The Global Game Jam happens once a year all around the globe expanding to over 100 countries during the last weekend of January. This year it fell on Jan. 25-27.

The date caused problems for some Miami students because it was the weekend before classes resumed.

“I had two students contact me but couldn’t get into their dorms yet, so they would have to bring all of their stuff with them because they can’t check in until Sunday,” said Phill Alexander, assistant professor for the department of Interactive Media Studies.

Because of this complication only 11 participants made it. Alexander said the number is usually closer to 25-35, but he might prefer the smaller number.

“When it gets more than 20, it’s harder to manage, people get spread out too much and it’s a little harder to build community.” 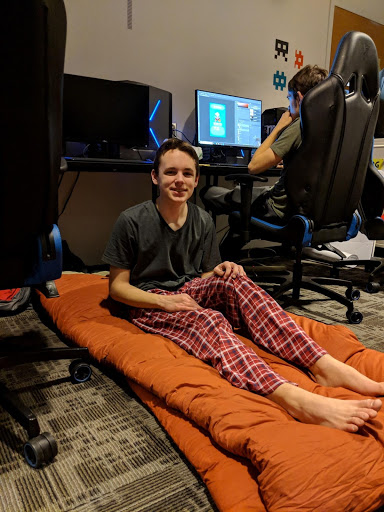 Game Jammer Cameron Foister tries to rest on the floor during the 48 hour game fest atf King Library: “It’s not the most comfortable sleeping place.” Photo by Rebecca Huff

Alexander acted has a chaperone, coach and designated IT service provider during the event. He was on site for the entire 48 hours and, much like his jammers, received minimal sleep.

“I have a pillow with me and when I get too tired I will just sleep on the desk and snore. People will wake me up if they need me,” he said.

Alexander slept for a total of three hours in 15 to 20-minute increments during the weekend.

Members of the event ranged from high school students to a Miami alumna and a professional web developer. Although most were university integrated media studies (IMS) majors, that was not a requirement to participate. In fact, there were two high school students, a computer and electrical engineering student, as well as a studio art major who popped in for a few hours.

The only requirement was a $55 registration fee which was used to purchase food for the event: breakfast, lunch, dinner and snacks for the midnight cravings.

Just as the gamers needn’t be IMS majors, they also did not have to create a digital game. One group created a board game. There weren’t any rules at all besides the obvious code of conduct.

“It’s more of a social event for everyone,” Alexander said.

“I like how it brings all the game designers together.”

Other participants like the event because they get real world experience.

Juliette Amorati, a sophomore IMS major, wants to go into game design when she graduates. She had never created a game before this year’s event, her first game jam.

“I want to learn the skills that are the most important to know,” she said.

Mack Patrick, a senior IMS major, is also a first-time jammer and wants to get more practical experience before graduating.

“If you’re going to get a job in games you have to be able to work under these kinds of constraints,” Alexander said. “Companies will do game jams if they’re doing something new so it’s an experience you’ll see sometime in your career and also for the undergrad students it’s a chance to create something for your portfolio that is 100% your idea because in a class there’s always some constraints.”

The Global Game Jam event at Miami University ended at 2 p.m. Jan. 27. Each team presented what they created to the group. The players were then more than happy to go home and get some rest before classes resumed Monday.