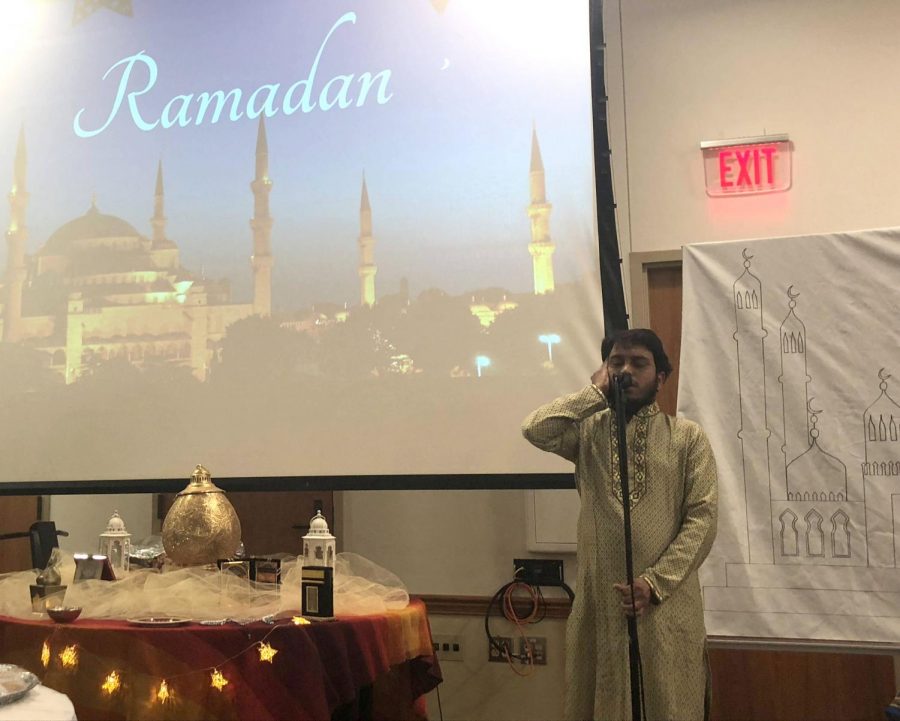 Tanbir Ahammad calls for the Maghrib prayer at sunset (athan), right before everyone practicing Ramadan broke their fast for the first time all day. Photo by Leanne Stahulak.

In the lobby of Miami University’s MacMillan Hall, about 30 men and 10 women knelt on colorfully-patterned wool blankets, heads bowed forward to the ground. A single voice recited the Maghrib prayer, the fourth daily prayer of Islam, breaking the peaceful silence that had descended over the worshippers. Despite the noise and music coming from the celebration upstairs, those participating in the prayer focused only on their worship.

On Friday, May 10, the Muslim Student Association (MSA) and Center for American and World Cultures (CAWC) hosted the first annual Sharing Ramadan celebration, a two-hour event meant to bring together members of the Muslim and non-Muslim community in Oxford.

Ramadan, as the ninth and most holy month in the Qur’an, is a 30-day long holiday in Islam, during which Muslims fast from sunrise to sunset. Followers of Islam will rise before dawn for suhoor, a meal eaten before the day of fasting begins, and at night will congregate for iftar, the breaking of the fast. Traditionally, the fasting lasts from 5 a.m.–8:40 p.m., with most Muslims choosing to break their fast by eating dates and drinking water.

Dates or other sweets are usually the first things Muslims eat after fasting so they can restore low blood sugar. After fasting all day, those who practice Ramadan eat two or three dates, take a few minutes to break and then dive into the iftar meal that’s prepared after sunset. The only people who don’t participate in the fasting are very young children, pregnant women, those who are ill and those who are traveling.

Because Islam follows a lunar calendar, Ramadan doesn’t always fall on the same dates but instead shifts every year by 10 or 11 days. While most years it occurs during the summer, this year Ramadan falls on May 5 and runs until June 4, during the last few weeks of the school year. Dr. Fatima Emlemdi, a visiting assistant professor who works for CAWC, wanted to bring more of the Islamic culture to Miami and suggested a public iftar to celebrate Ramadan.

“MSA… I want them to be visible,” Emlemdi said. “I got the idea, how about Ramadan, this year it’s during the school days, how about we have a public iftar and invite everybody and let them come.” 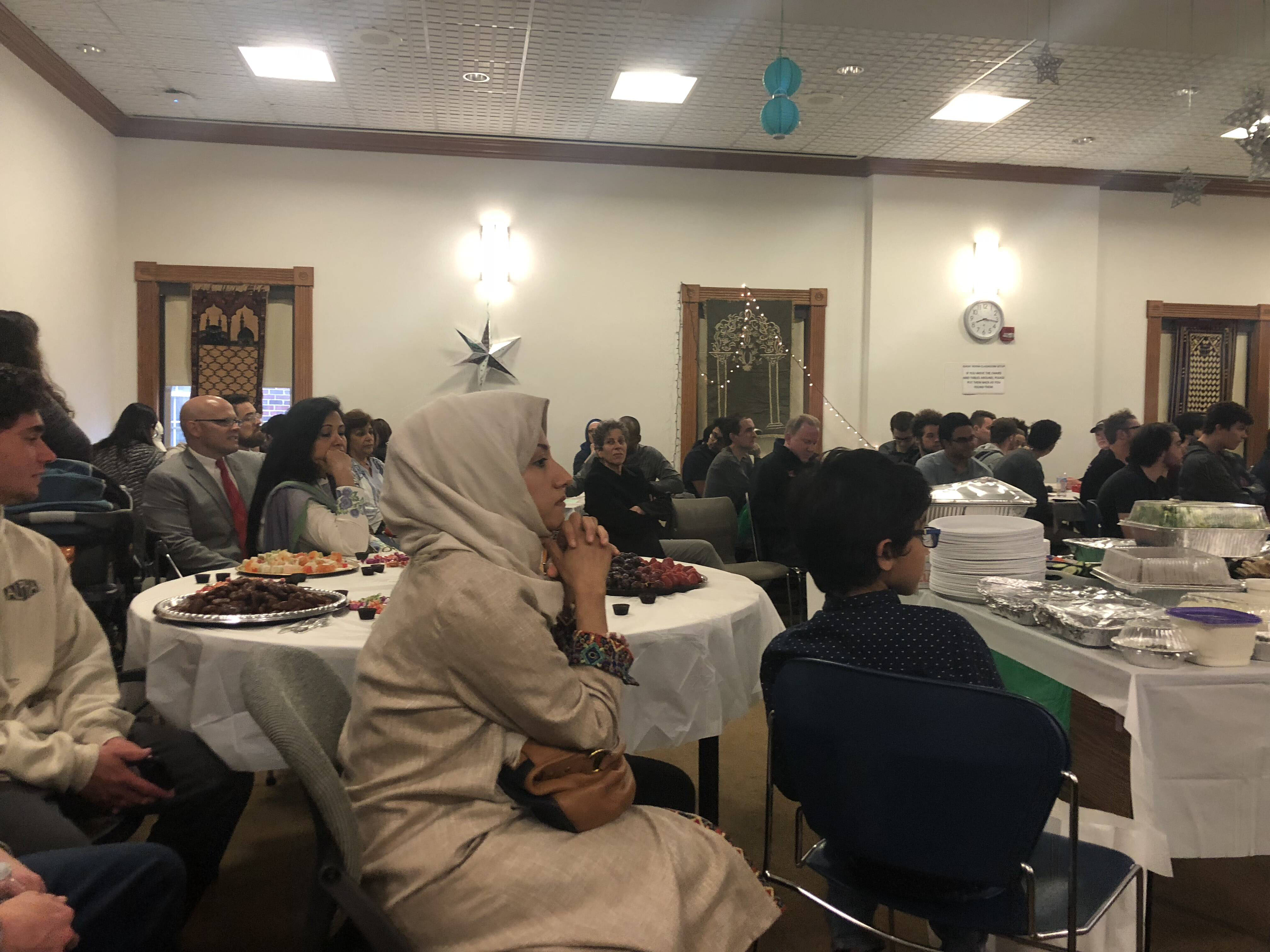 Shatha Alali, a graduate student in English at Miami, sits among dozens who attended the Sharing Ramadan celebration May 10, as Zaim Haq, president of the Muslim Student Association, gave a presentation on the meaning of Ramadan. Miami President Gregory Crawford (left rear in red tie), was one of many members of the community in attendance. Photo by Leanne Stahulak.Sharing Celebration and Tradition with the Community

Emlemdi was “overwhelmed” by the number of people who did come to the event. Over the course of the two hours, roughly 200-250 people stopped in a mixture of Miami students, faculty, Oxford community members and practicing Muslims from the Cincinnati and Dayton areas. Room 212 of MacMillan Hall was packed to the brim as MSA president, Zaim Haq, gave a presentation on the meaning of Ramadan.

The presentation was meant to enlighten those who were not familiar with the practices of Ramadan about its importance to the Islamic faith, and some of its traditions. Fasting is the most well-known tradition, but the presentation also illustrated how reading and reciting the Qur’an plays a large role in the holy month, as well as consistent prayer.

Haq said that one of the primary goals of Ramadan is to cultivate more taqwa, or God consciousness, which is mostly what motivates Muslims to fast. Abstaining from worldly hunger reminds them to be grateful and humble to the God who created them.

“Increasing that taqwa… that’s the most important thing,” Haq said. “That’s the reason that we fast, it’s the reason why Muslims are here on this earth: to be aware of God, to thank God for everything that we have.”

After Haq gave the presentation on Ramadan as a whole, more presenters went up to talk about how Ramadan may be celebrated the same religiously across nations, but culturally, the celebrations differ.

In Pakistan, for example, Muslims commonly break their fast with fruit salad instead of dates and water. And in Turkey, municipalities will set up tables that extend hundreds of feet down the street to feed people for free.

But in the Northern Middle East (Egypt, Syria, and Jordan), people commonly invite large groups over for suhoor and iftar, instead of celebrating in a public setting. They also decorate the streets with El-Fanous, the Ramadan Lantern.

And in Palestine, one man, the musaharati, will walk through the streets and between the houses before dawn to wake everyone up for suhoor, so they don’t forget to eat before the sun rises and the fasting begins.

Several Miami students were impressed by what they learned during the presentations about Ramadan. Sophomore Rayanna Floyd came to the event because her friend invited her to come, but afterward, she thought it was interesting and was glad she came.

“It’s been very eye-opening, hearing about how they talk about the Qur’an and how Ramadan has a lot to do with that, and then the whole food piece and how it’s so different across all of the countries,” Floyd said, “because a stereotypical mindset would be Ramadan is the same, and I like how they represented each of the countries.”

Floyd’s friend, Shams Al Khafaji, is a freshman at Miami, and a Muslim. She said that she was “super surprised at how many Arabs are at Miami.”

“I think it’s just super cool to have this at Miami because especially I feel like Arabs are very underrepresented here because you just don’t hear about them,” Al Khafaji said. “I think it’s good that it’s informing people and educating, and it just makes my heart warm that more people know about (Ramadan). I wish everyone would get this knowledge because they explained Ramadan pretty well.”

At 8:40, practicing Muslims went downstairs to the lobby of MacMillan to pray the Maghrib prayer, before returning back upstairs to break their fast. A variety of dishes from various countries, including stuffed grape leaves common in Libya, Palestinian maqluba, Egyptian Fattah (a kind of rice) and batata mbatna (stuffed potatoes) graced the table. The more people who came, the more food piled on top of one another.

Breaking out of the Oxford Bubble 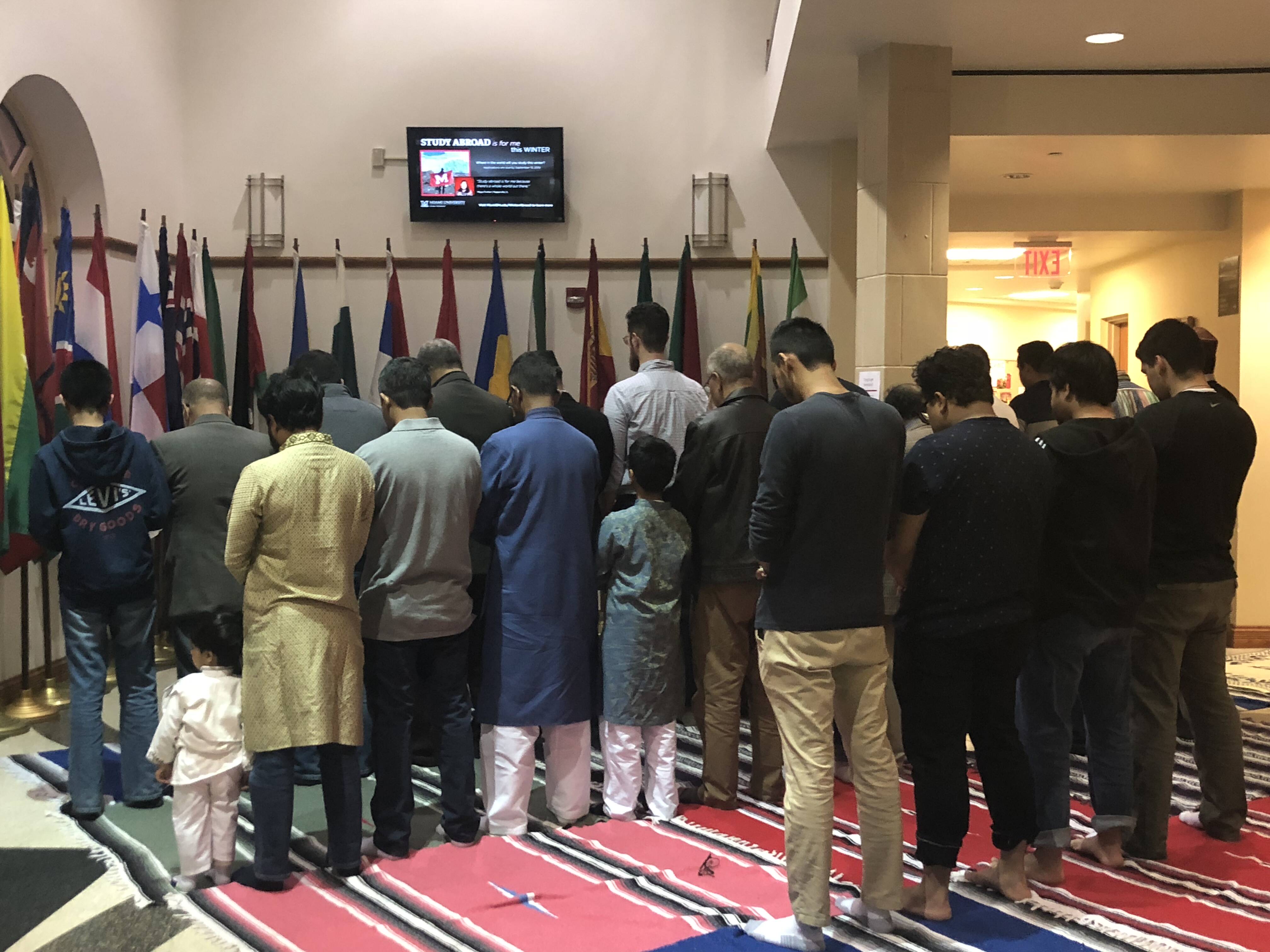 Muslim practitioners gather together for the fourth daily prayer, the Maghrib prayer, in the lobby of MacMillan Hall, last Friday. Photo by Leanne Stahulak.

Jessica Baloun, a sophomore international studies, and history major, will be studying abroad this summer in Kosovo, a small Eastern European country near Serbia and Albania. One of her professors advised her to come to this event because they’ll still be celebrating Ramadan in Kosovo when she arrives.

She said it’s important to attend events like these, especially as Miami is trying to increase its diversity.

“I think the opportunities that the ITS department in general puts on are missed opportunities by a lot of students,” Baloun said. “They have a lot of different events like this, and students don’t take advantage of it. Being able to share these kinds of holidays and learn from our fellow students is really important.”

Baloun also stressed the existence of the “Oxford bubble.”

“At Miami, there’s an Oxford bubble that we all get trapped in, so I mean being able to branch out in little ways like this is just really important for students to do.”

In his 15 years of teaching at Miami and being the advisor for the Muslim Student Association, Dr. Zafer Ozdemir had never seen such a crowded MSA event. Despite the abundance of students from “white, upper-middle-class families,” Ozdemir said, the fact that they’re willing to come to events like this shows that they’re willing to be “exposed to new cultures… and unique experience.”

“You become an enemy of the ‘other’ that you don’t know, so if you know the ‘other’ you won’t be inclined to be an enemy or have the feeling that most do,” Ozdemir said. “You have less of it. I think it’s important to get to know one another.”

“Especially in the climate in our country, I think it’s so important for us  — in fact in our world —  to show love across all religions,” Palmer said. “I want to be supportive of their traditions…  whatever we can do to break the barriers, get to know one another.”

Emlemdi and Ozdemir plan on making the Sharing Ramadan event a yearly tradition and several people who attended the event hope to see more events like it in the future. Nadia Elayan, who had Emlemdi as a professor last semester, was happy to have an event both she and her mom (who helped Emlemdi plan) could attend and enjoy together.

“Islam is a religion that’s celebrated and practiced around you,” Elayan said. “I think it’s important to get to know the other religions that are around you.”

“For me, it’s a month where I get closer with my faith, closer with who I am, so I think it’s always good to have that time in your life where you just want to be closer to who you are.” 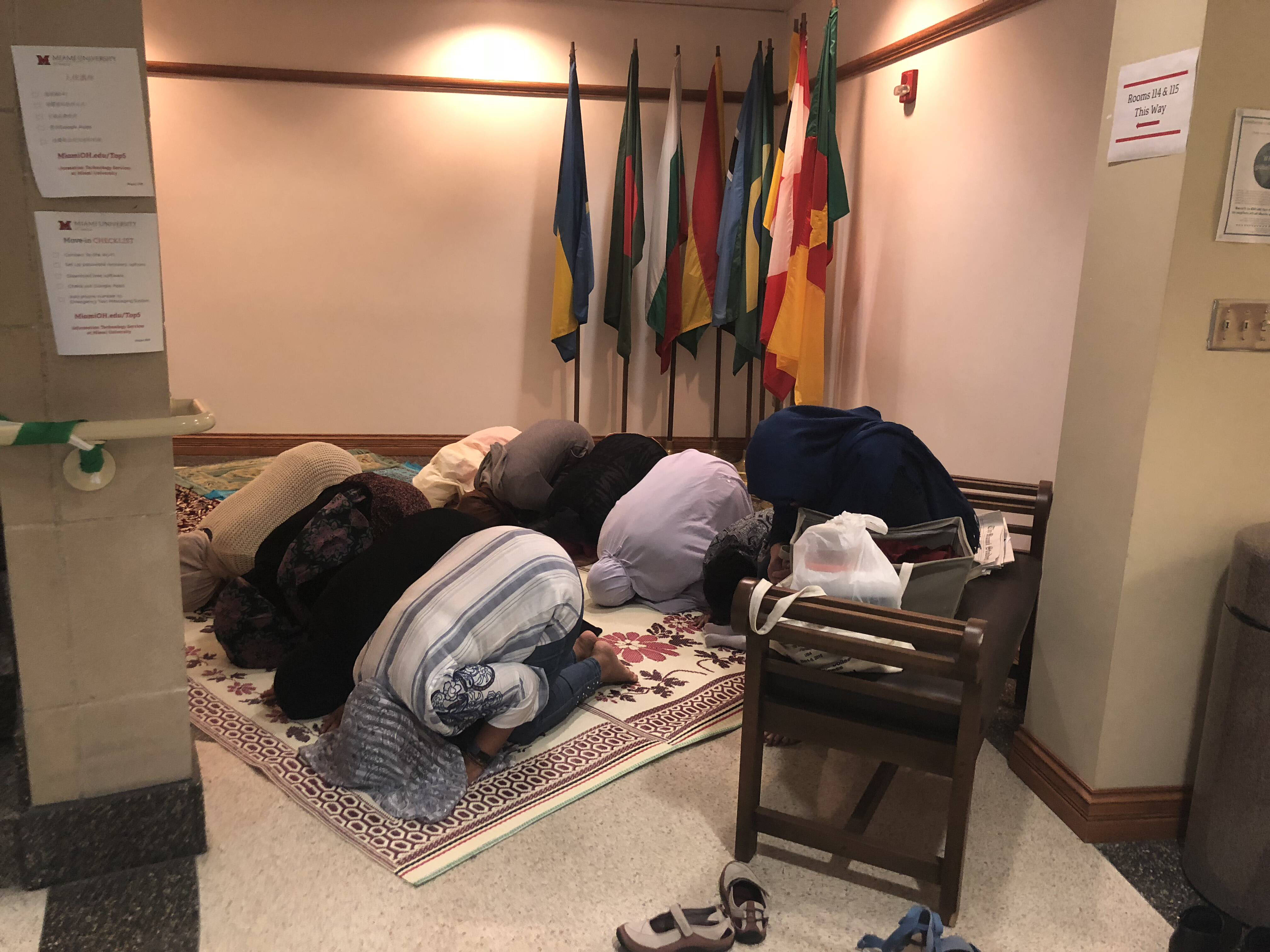 Muslim women complete the Maghrib prayer behind the men, a common tradition in Islam. Photo by Leanne Stahulak.