Sharefest returns to Oxford for its 16th year

Miami University students donated 109 tons of usable food, furniture and clothing that they didn’t want to take home at the end of the spring semester in 2019, according to an annual report from ShareFest, which collected it all for redistribution to local food banks, and service agencies.

Last spring was ShareFest’s 15th anniversary and the collection was 12% higher than the 97 tons collected in 2018, Carol Michael, director of the organization, told Oxford City Council at its Feb. 18 meeting. She described ShareFest as a “service and environmental non-profit corporation dedicated to the collection and redistribution of items donated by Miami students and Oxford Community members.”

The ShareFest corporation serves four purposes: to help the community, to teach sharing and environmental ethics, to protect and preserve the environment and to help keep Oxford clean as Miami students leave Oxford for the summer, Michael said.

‍ShareFest 2020 is already in the planning stages and is scheduled for May 13-19. The collection will be accepting furniture, appliances, housewares, clothing and nonperishable food items. A list of needed donations can be found on the ShareFest website.

Donations were recorded to have 266 scheduled off-campus picks through the ShareFest website. Donation drop-offs were increased by 4.5% from 2018 with 95 donation drop-offs. Forty-six residence halls at Miami participated in the collection to the community, according to the report.

Donated goods shared with a variety of agencies

Habitat for Humanity for the Greater Cincinnati Area received 25 truckloads of goods from ShareFest 2019. The estimated retail value of these items was $17,000 dollars, Michael said.

Goodwill is a sponsor and a recipient of ShareFest goods. Proceeds from ShareFest donations that go to Goodwill go back to citizens in Butler County, said Sharon Hannon, marketing director for Ohio Valley Goodwill Industries.

Donations to the Oxford Goodwill are only sold at the Butler County and Fairfield stores. These stores have a relationship with the Butler County Board of Developmental Disabilities through a voucher program. Families setting up new homes, apartments or individuals are able to redeem these vouchers in the Butler county store for clothing and other goods. A vocational training center is located next to the Fairfield center that serves around 40 people that are sponsored by Butler county.

Hannon said she remembers the days when students would leave items out on the street when they were moving out of Oxford at the end of the school year. ShareFest has changed that. “It’s really commendable on the part of the community and Miami that they work together to make the event possible, to make it such a huge impact on the community and the non-profits they partner with,” Hannon said. 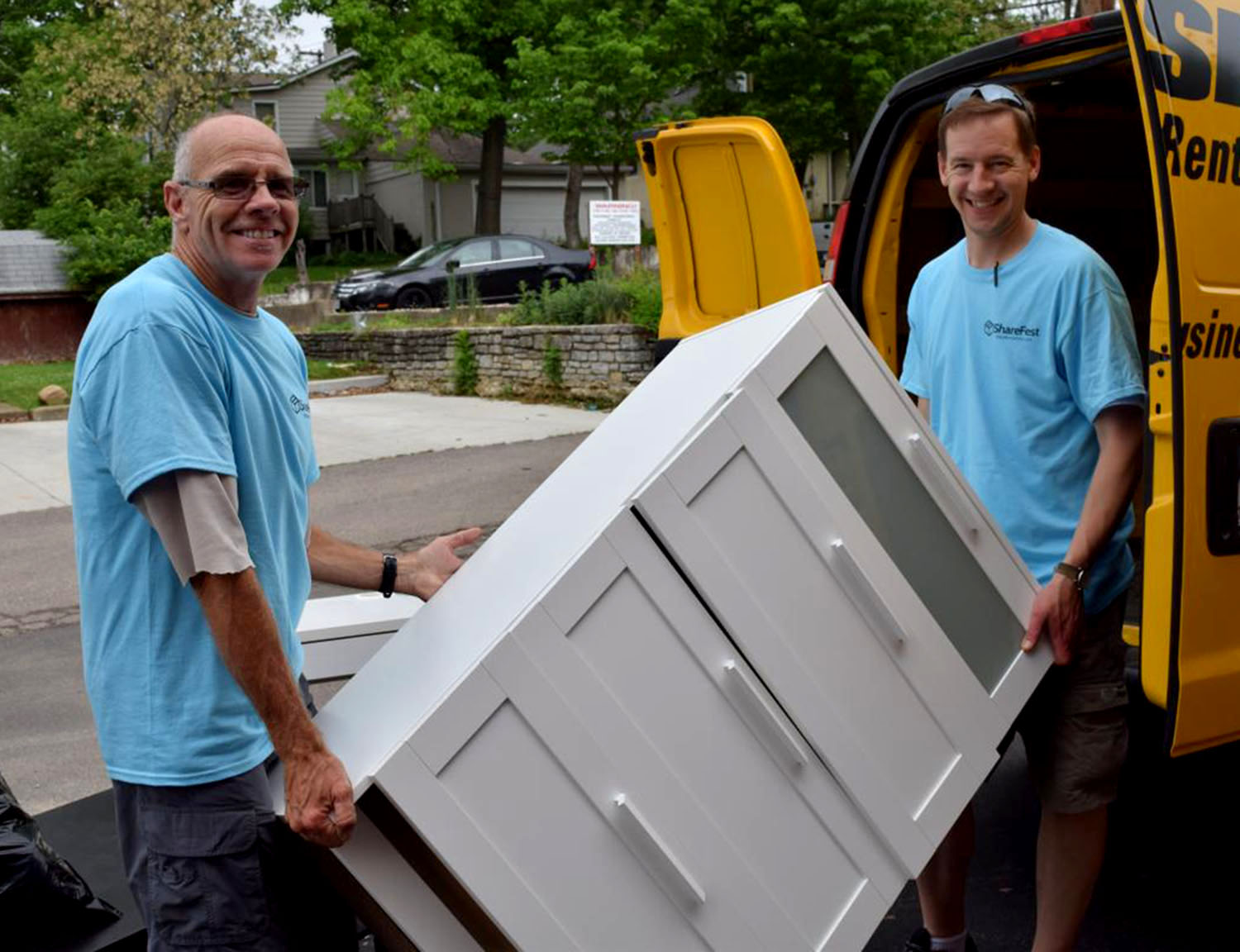 Furniture, appliances, clothing and nonperishable food items are collected for the ShareFest recipients every spring. Photo from ShareFest 2019

The Oxford GoodWill is one of the five recipients of some of the furniture collected, however, acceptance depends on the needs of the organization. Unfortunately, stained and damaged upholstered items and mattresses cannot be accepted for resale, she said.

Oxford Community Choice Pantry received 2,906 pounds of food last year. The food went to the pantry’s  Summer Harvest program, which serves families with children under 18 who cannot depend on the school lunch program over the summer.

Ann Fuehrer, the executive director of Talawanda Oxford Pantry and Social Services (TOPPS), said the pantry relies on the end of the year food that students leave behind. “We know that we are going to be getting those things from ShareFest,” said Fuehrer. “If it doesn’t come from donations, then I have to buy it for the pantry,”

Food such as mac and cheese, instant oatmeal, ramen and popcorn, are staples left over in the kitchens of college students and are welcomed at the pantry. Such foods can be prepared by a child if parents are at work, Fuehrer said. The donated food was used for bags in the Summer Harvest program. The bags each contained 16 pounds of food that the pantry sent to 323 families last summer, she said.

Volunteers make it all work

“Everyone in the community gets involved and is responsible for the well-being of everyone,” Fuehrer said of the ShareFest campaign.

Fuehrer said all of it would probably just go to a landfill if ShareFest didn’t happen. “Agencies like ours who are about redistributing resources in the community can get food donated and it makes our operation a lot more efficient,” says Fuehrer.

ShareFest is a community organization that has volunteers from Duke Energy, Talawanda tennis, track, lacrosse, baseball and softball teams and student council students, Oxford Bible Fellowship and Furniture Fair, Michael said. Despite that the collections take place during finals, Miami also offered up volunteers from the Miami University Academic Support office and the Advising Association and the Rec Sports Staff.

The local sustainability effort not only has received local attention but national recognition at the Reuse Conex National Conference. A podcast on the community  collection has been requested for the American Association for Sustainability and Higher Education, Michael said in her report to council.

A community in New Mexico has reached out to Oxford ShareFest to learn more about how to implement a program in its community, she said.