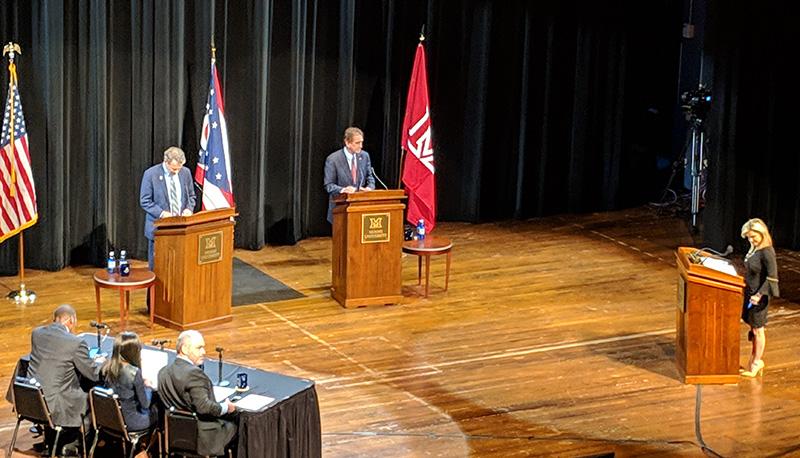 Sen. Sherrod Brown and Rep. Jim Renacci talked health care, the economy and student loans in their final senatorial race debate at Miami University Friday night before a crowd of more than 600.

It was a tightly scripted, one-hour event hosted by Miami and WLWT-TV Channel 5 in Cincinnati, but also tinged with humor, barbed comments and outbursts from the audience.

When the candidates were asked by panelists about their bipartisan efforts in Congress, Brown pointed out that some of his efforts have yielded results, even in a GOP-led Senate.

On Wednesday (Oct. 24), President Trump signed the Stop Act, a bill sponsored by Republican Sen. Rob Portman, and supported by Brown, that will help the Customs and Border Patrol to identify packages coming into the country that contain dangerous drugs like fentanyl.

“I hope tonight we can heal those divisions,” said Brown.

But mostly they disagreed on many issues, including health care.

Panelist John Forren, chair of Miami’s Department of Justice and Community Studies, asked how the two would fund Medicare in the future.

“The first thing we need to do… is to take the $716 billion that was taken from Medicare and put over to the Affordable Care Act, and put that back to Medicare,” Renacci said.

Brown, a two-term incumbent, was first elected to the Senate in 2006. He earlier served as a congressman representing Ohio’s 13th District, and as Ohio Secretary of State.

Renacci is in his fourth term representing the 16th Congressional District, which extends from Wooster north to Cleveland’s western suburbs, and also veers south and east of Akron.

Renacci serves on the House Ways and Means and House Budget committees. 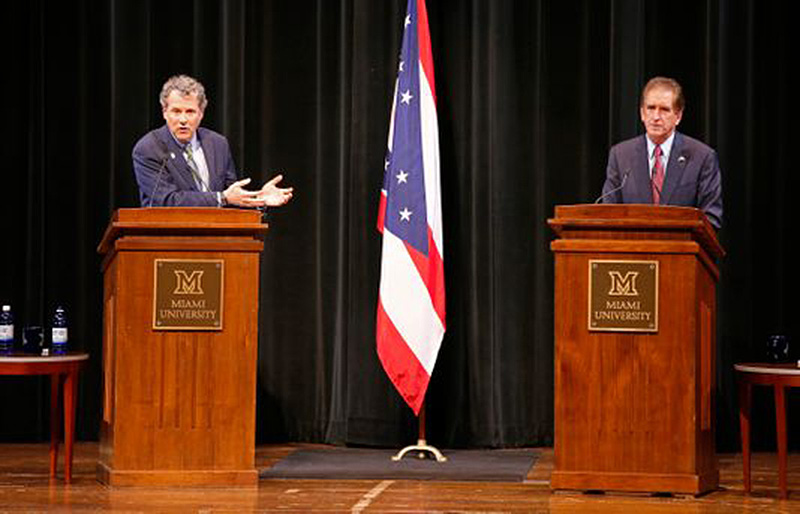 The most recent polling, by Suffolk University in early October, showed Brown favored by 54 percent and Renacci with 36 percent.

Since January 2017, Brown has sponsored 59 bills, among them a bill requiring Medicare to screen new enrollees, and provide annual wellness visits, for substance use disorders and opioid prescriptions.

Brown sponsored the CRIB Act, which Trump signed into law Wednesday (Oct. 24), that helps infants suffering from conditions caused by their mother’s opioid use. It expands Medicaid coverage for infants in pediatric recovery facilities.

Renacci opposes the Affordable Care Act and has voted repeatedly to repeal it.

He has co-sponsored three health-care initiatives that have passed the House, but not the Senate. Among those are the Maintaining Protections for Patients with Preexisting Conditions Act of 2018 and the Strengthening Partnerships to Prevent Opioid Abuse Act.

A question from the panel that struck home for many in the audience was whether the federal government should address the $1.53 trillion in student loan debt Americans owe, a debt that affects consumer spending and home-buying.

“I had a student loan and had a number of jobs through college,” said Renacci.

But he did not answer the question directly, instead suggesting that students shouldn’t run up college debts for degrees that don’t result in high salaries – and that not everyone should go to college.

Brown accused Ohio politicians of causing some student debt because of declining state support for education.

The two also answered questions about immigration, agreeing that secure borders are important. Renacci made a promise that he would prioritize immigration if elected to the Senate.

Brown said, “I believe we can protect the border without tearing children away from their families.”

Both men gave reasons for the lack of progress on immigration; Renacci said that it was the fault of Congress for not prioritizing immigration reform, but Brown said that he’d supported bipartisan immigration bills in the Senate that were rejected by the House.

None of this sat well with Tim Hesselbrock, a farmer who attended the debate.

“I would like to have seen, maybe from both of them, a little more substance,” said Hesselbrock, who supports Renacci. “I want to know what specific—specific—things they’re going to do.”

Kelleigh Beatty, a Miami University student attending the debate, said “I think there was a lot of mud slinging on both sides, but I think there were some good points being made if you just peel back the layers of being angry.”