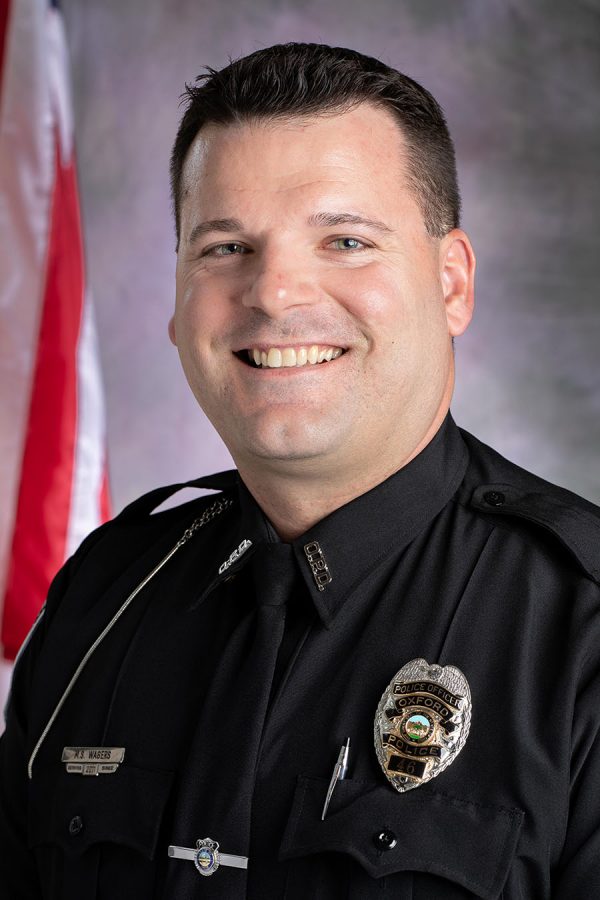 School resource officers in the Talawanda School District are trained to immediately respond to school shooter threats and try to confront and neutralize that threat as soon as it appears.

Last week, an investigation by the Florida Department of Law Enforcement found Scot Peterson, the former school resource officer at Marjory Stoneman Douglas High School, did “absolutely nothing to mitigate” the mass shooting at the school on Feb. 14, 2018. For his inaction, Peterson now faces 11 charges of neglect of a child, culpable negligence and perjury.

The gunman killed 17 students and faculty members while injuring 17 others.

The training Peterson had received on how to deal with active shooter situations is similar to that given the Oxford Police Department and Talawanda School District school resource officers.

What Local Officers are Trained to Do

“We go through solo engagement of an active shooter,” said Matt Wagers, Talawanda Middle School’s school resource officer. “Basically, what that means is, if there’s an active threat in that school or on that school’s property, I don’t wait, I don’t call for backup. I immediately go and do everything I can to address that threat and neutralize that threat any way I can to keep the kids safe.”

Wagers said that he’d be using his radio to call for backup and instruct people on where to go during that situation, all while addressing the threat as the first response to it.

“I hope it never comes to this, but when you become a school resource officer, you take the chance of an active threat happening,” Wagers said. “You have to be willing and ready to engage a threat. If that means you have to lay down your life to protect those kids, that’s what the job calls for and what we’re trained to do.”

The Ohio School Resource Officer Association website says, “Narratives about the time before the attacks share a common theme—it can’t happen here. Many share this mindset; however, each story confirms that an attack can actually happen anywhere, anytime, and schools must be prepared.”

Last year, when Ed Theroux took over as Talawanda Superintendent, he said parents in the district told him their No. 1 concern was school safety.

Theroux did not respond to the Observer’s request for comment on this story by the time of its publication.

Oxford Police Chief John Jones said he works with Theroux to address school safety issues and encourages open communication between the school resource officers under his jurisdiction and their respective school’s administration.

Experienced Officers in Every Talawanda School

Each school resource officer in the Talawanda School District is required to attend a 40-hour basic training session to work in the schools, Wagers said.

“These are police officers who have been working,” Jones said. “They’re state-certified as police officers, and they’ve already had all the required classes like crisis management, de-escalation, laws of arrest and those types of things. Those 40 hours, that’s specific to schools. It’s more how you handle juveniles, what information and skills are needed in a school and how you address crime and violence in schools.”

Wagers worked in the Oxford Police Department for more than four years before becoming a school resource officer. Jones said a recently-hired, inexperienced officer would not be placed in that role.

“They want you to have some experience,” Wagers said. “As a school resource officer, it’s more than drinking chocolate milk and eating chicken nuggets with the kids. You get into investigative work.”

After the 40 hours of basic training, the Oxford Police Department pays for its school resource officers to go to the annual conference held by the Ohio School Resource Officer Association and individual classes that deal with topics like juvenile mental health.

When possible, training takes place during the summer, when school isn’t in session.

“We try not to send our school resource officers away from the schools during the school year,” Jones said. “The idea is to have them there.”

“That’s a resource for us,” Jones said. “It’s something to keep us up to speed on what’s going on in the school resource officer world with new information that comes out. But there’s no requirement that says you have to be a member.”

Annual membership to the association costs $49 per officer, according to its website.

School Officers Deal with Many Issues

“Any day that school is in session, we’ll be in the buildings,” Wagers said. “We’re there all school day long.”

Since Wagers became a full-time school resource officer, he said he has not been pulled from the school to help out on other runs.

Besides the prevention or handling of school shootings and other crime on school grounds, school resource officers also help with the de-escalation of unruly students. They also assist school administration and counselors, and address incidents that students report happened at home, like sexual assaults or domestic violence. They work with Child Protective Services.

“At the end of the day, and this is the big part of it that we do a lot, you’re there to build positive relationships between the police departments and the community and trying to bridge that gap,” Wagers said. “You really have to be the face for the police department within the school.”

Wagers does have his own office near the administration offices at the Talawanda Middle School, but he said, unless he is working on paperwork, he tries not to be there too often. Instead, he prefers walking around the school and interacting with the students and faculty.

“I try to get out into the building,” Wagers said. “I participate in class discussions, which lets the kids see me in a non-law enforcement role. I’ll get out and cover lunches, interact with the kids because they’re all there in a group […] I’ll go out and pass the football with them or shoot hoops with them, just trying to have contact with them in a non-enforcement type scenario.”

Wagers said that’s his favorite part of the job. He tries to be a positive male role model for students, who might not have one in their home lives.

“A lot of them will come up to me just to talk about life in general,” Wagers said. “It’s a good feeling, when you’re able to give them some positive advice and encourage them to keep their heads up. If there’s any way to help them, we will.”

Wagers said he thinks building positive relationships with the students and helping them out may help prevent school shootings and other school-related crime.

Wagers said the benefit of having a full-time resource officer in each school is that they can immediately respond to any threat. Instead of the minutes it would take a dispatcher to send an officer to the scene, it takes just seconds for a school resource officer to confront any threat because that officer is already on-site.