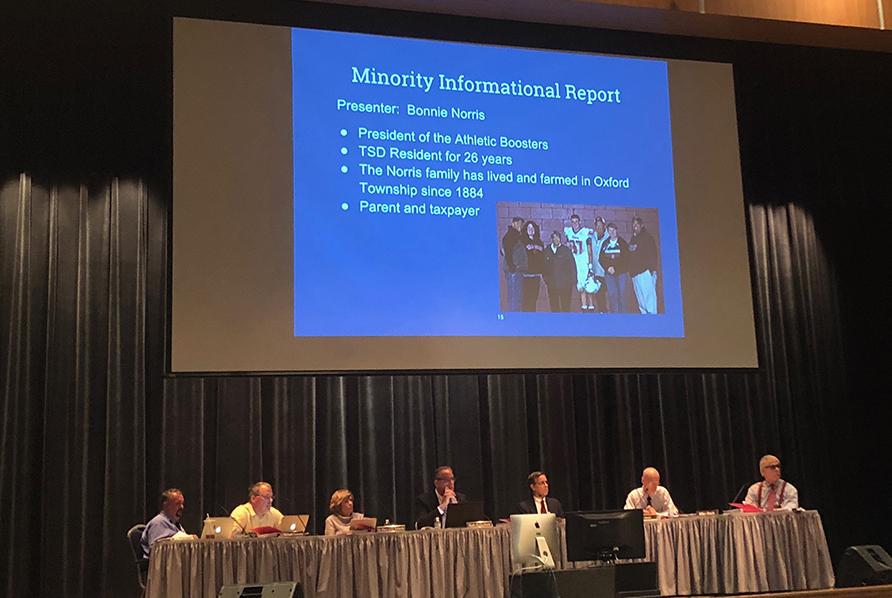 The Talawanda Board of Education at Monday’s meeting, where it heard majority and minority reports on changing the school mascot. The board then voted 3-2 to accept the majority report and change the mascot from “Braves” to “Brave.” Seated from left to right: Supt. Ed Therow, Board Members Mike Drowder, Mary J. Roberts, Mark Butterfield, Chris Otto and Pat Meade, and Talawanda Treasurer Mike Davis. Photo by Halie Barger

Talawanda has a new name.

The Talawanda school board voted 3-2 to change the high school’s mascot from “Braves” to “Brave” on Monday after a meeting lasting more than three hours.

A heated crowd filled the Performing Arts Center at Talawanda High School to listen to the recommendations made to the board by the superintendent-appointed branding committee.

The change responds to complaints that the name and logo currently used by Talawanda are offensive. Many feel that the logo is more of a “caricature,” depiction of what a Native American would look like, and others feel that they are simply honoring Native Americans with the “Braves” name.

The branding committee presented majority and minority reports, with the majority recommending the change adopted by the board.

The majority report was presented by Sam Morris, a member of the committee and longtime Talawanda community member. The majority report recommended the board drop the “s,” making it the Talawanda Brave, brave being an adjective, instead of the plural of a word for Native Americans, “Braves.”

Morris also recommended that the board cease to purchase anything with the Native American logo or Braves name. The majority report included other recommendations: to introduce Native American curriculum to the schools and to seek grants to fund the change.

This is the fourth time the mascot has been brought up in the past two decades, and the most recent change was from the “Braves” head with details to the silhouette with a “T” over top. However, most jerseys just have a “T.”

The old logo, in multiple variations, are all over the district.

“The evidence-based research on this issue is clear and nearly unanimous,” Morris said. “This is an educational institution. As such it must be responsive to evidence first.”

The minority report was presented by Bonnie Norris. Norris, also a longtime Talawanda community member, recommended that the board make no change. She said that the process had not truly represented the wishes of most community members.

The committee was comprised of 17 members. According to Holli Morrish, Talawanda’s director of communications, the committee was chosen as an equal mix of people for and against the idea of changing the mascot, as well as a mix of community members, staff members and coaches.

According to the minority report, dropping the “s” would cost the district hundreds of thousands of dollars. “To be fiscally responsible we probably need to look at the potential expenses,” Norris told the board.

One of the examples Norris gave for a potential cost was the replacement of the artificial field turf which would cost the district an estimated $450,000. The field turf has “Braves” printed in the end zone, therefore with the majority’s recommendation of ending the name “Braves,” the field Turf would need to be changed as well.

Norris ended her presentation by imploring, “Please do not send a message to our children that they are racist or bad because they embrace the positive qualities that lead to the selection of the Braves. Please don’t tell our students that the pride they show in their school is wrong.”

Norris was referring to online comments made by some in favor of change, in which students were called racist.

Public Reaction at the Meeting

The reports were met with differing opinions during the public comment section of the meeting.

“This isn’t racism. This is privilege,” Guy Jones, a Native American at the meeting advocating for a change said. “I would like to see my children and grandchildren walk with pride.”

Jones was referring to the years of abuse the Native Americans have experienced in America, and the disregard for their existence within the Talawanda community. Jones was just one of several Native Americans who were present in the crowd.

Jody Asher, community member and parent, started the “Save the Brave” campaign on Facebook in July, after reading about the possibility of a change. Asher presented a petition to the board on Monday, signed by nearly 1,400 people.

Asher said that the “Braves” mascot is deeply rooted in the tradition of the Talawanda community, and therefore should not be changed.

“This is a community issue. You need to let the community decide,” Asher told the board.

Henson said he is one-quarter Cherokee, and told the board that American Psychological Association (APA) studies cited about the effects the mascot has on mental health are not reliable. These studies provide statistics on the declining mental health of Native American students who attend a school with a Native American mascot.

Henson’s comments were disputed by others at the meeting.

NAGA is not recognized by national Native American groups, and Henson should not be treated “as if he were the voice of Native Americans,” said Kathy McMahon-Klosterman, a member of the branding committee.

George Ironstrack, a community member, parent and Miami Tribe member, also voiced his disapproval of Henson to the board.

“I think that it is very interesting to open the door to have someone stand up here and present lie after lie,” Ironstrack said.

Henson has spoken out in other communities where schools considered changing their Native American logos, including Forest Hills School District in suburban Cincinnati. He was invited to the Talawanda meeting by community members opposed to the changing the name here.

Board Members Explain Their Votes

Board Member Pat Meade motioned for the board to accept the recommendation of the majority, and Chris Otto agreed to second that motion. Before the decision was made, the board members explained their individual perspectives on the issue.

“I think it’s a difficult issue for the community. It would do it justice by deciding it tonight,” Meade said to the board.

Some board members wanted more time to discuss the matter.

“I really feel that we, as a board, have not had that opportunity to discuss within the board ourselves, and I feel that we should do that at a work session,” said member Mary Roberts.

Otto said he took the community as a whole into account when making his decision.

“I’ve got friends on both sides of the issue, and I think what was said about trying to bridge that gap and keep our community together is why I am agreeing with this,” Otto told the board.

Mark Butterfield, president of the board, also expressed his concern for the community and district as a whole when explaining his decision opposing the change.

“As a board member I have dealt with trying to keep the district from splitting apart,” Butterfield said. “I wanted everyone to have the opportunity to speak because this is a very important decision.”

Board member Mike Crowder, who supported the change, outlined his feelings in terms of family and community as well.

“As Talawanda family members we are going to disagree on things,” Crowder said. “There are no winners and losers in this thing unless we want them to all be the winners and that’s the children.”

Butterfield and Roberts voted against adopting the change, and Otto, Meade and Crowder voted in favor of the change.