Service group repurposes items for those in need 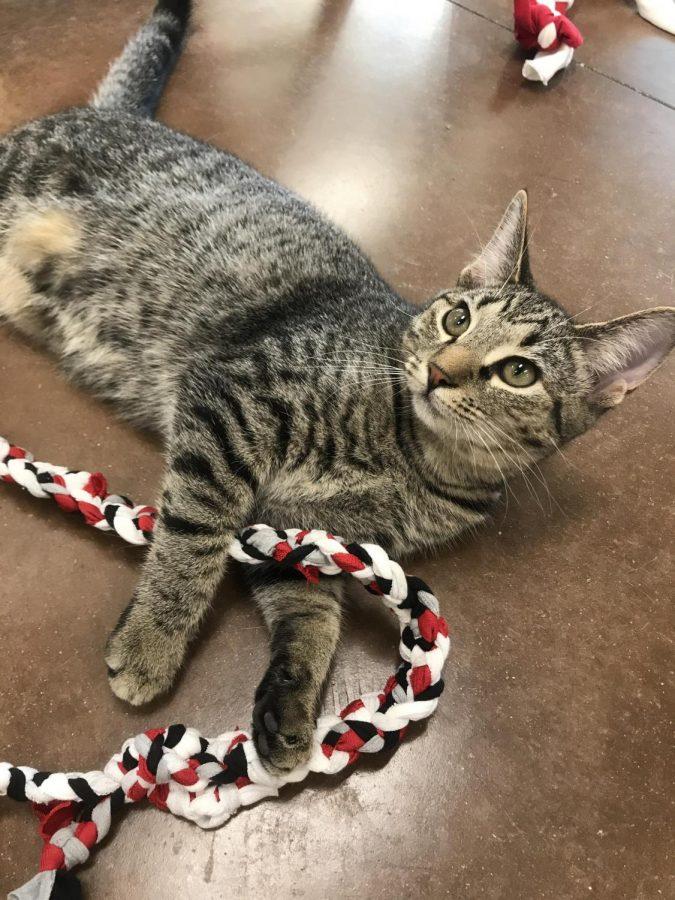 A cat at the Animal Adoption Foundation in Hamilton plays with a rope toy fashioned from old T-shirts, that was made by Revamp volunteers.  Photo by Lauren Shassere.

Once a month, the Revamp Service Organization at Miami University gathers together to serve the needy in Oxford and its surrounding areas in unique and exciting recycling ways. The organization seeks to put into practice the adage that one man’s trash is another man’s treasure.

Revamp currently has 20 active members and specializes in repurposing household items into useful materials to donate. In the past year, this student-run organization has launched projects such as repurposing old T-shirts into blankets for local homeless shelters, held clothing drives and even repurposed recyclables into dog and cat toys and beds for local animal shelters.

The founder of the organization, Gracie Mandis, said she initially had the vision to help people in poverty all across the world. She refocused her attention on the Oxford area when she enrolled at Miami. She is now a junior, majoring in laboratory science, with a pre-med co-major and an art therapy minor. Looking forward, she said she aspires to continue helping people in a future career as an oral surgeon.

For now, she is leading Revamp into its second year of service in Oxford and the surrounding area. With 47% of the local population living below the poverty line, according to the U.S. Census, Mandis said the efforts are needed.

“It’s important for people to help one another and share what they have, these are simple rules that I have grown up with,” Mandis said.

This year members of Revamp plan on expanding the scope of their help by raising money for holiday gifts for local youth and furthering their relationships with the local animal shelters. Gabriel Tobon, vice president of the group, noted the importance of service organizations such as Revamp. While Oxford has several notable local service organizations, Revamp provides a well-rounded and unique focus; not only thinking of people in need but animals in need as well.

“Revamp brought people together to do something inherently good rather than focusing on shallow personal needs,” said Tobon.

One animal shelter the organization has donated its goods to several times and plans on continuing with is the Animal Adoption Foundation. That is a no-kill, non-profit animal shelter located less than 20 minutes outside of Oxford in Hamilton, Ohio.

Director of the shelter, Eric Johnson, said the Animal Adoption Foundation stays functional entirely with the help of donations. That allows it to complete its mission of “saving lives one pet at a time.

“The toys that were donated are being used for both our cats and dogs and provides some much-needed distraction while they await their forever homes,” Johnson said.