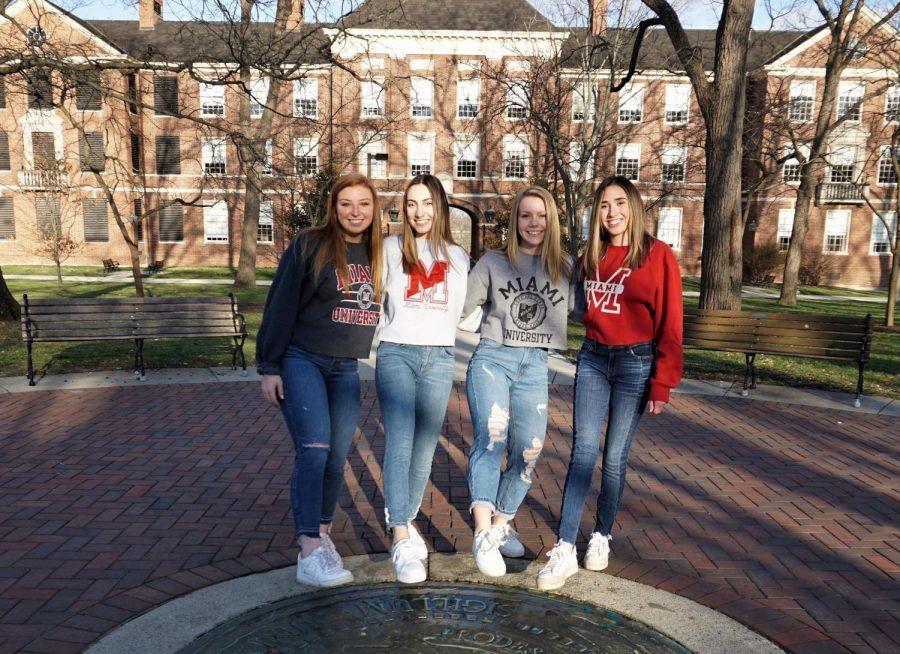 At 1:30 p.m. on March 13, every student, professor and staff member at Miami University put his or her life on pause as the school shut down and went remote for the remainder of the semester. Miami students had to prepare for leaving campus, leaving friends and switching to online classes.

While the transition affected everyone, it was especially life-changing for many of Miami’s 3,000-plus graduating seniors.

Like their peers, seniors Megan King, Megan Remaley, Melissa Eterno and Sydney Shadovitz did not want their college careers to end in mid-March — and so they continued to live together in Oxford even as most students and faculty deserted campus.

Because three of the girls were from out of state, they decided it would be safer to remain in Oxford while COVID-19 surged through the country. Even though they were just four of 3,000, they represented the reality faced by many college seniors. These are their stories.

Roommates find strength in each other

Megan King was a marketing major from Cleveland, Ohio. During quarantine, she traded her walks to the Farmer School of Business for hikes in Miami’s outdoor spaces. But even though she had been motivated to get outside and stay active while remotely learning, she struggled with the transition to online classes.

“I feel like I’m having such a difficult time motivating myself because I can literally do class in bed and watch Netflix 24/7,” King said a few weeks before graduation day on May 16.

King’s three roommates likewise struggled to stay focused. They turned to each other to stay strong. That has especially been the case for King and Shadovitz.

“The other day I was going back through all my Snapchat memories over the past four years,” King recalled. “We were alone together freshman and sophomore year, like in our little dorms;  we always did the weirdest things together.”

Later, two became four roommates, and the four found lifelong friends in each other. So, while COVID-19 put an end to their senior year, it did not take a toll on their friendships.

Friends since their first year at Miami

Shadovitz is a gerontology major from Acton, Massachusetts, who will be attending Miami in the fall as a graduate student. She said she’ll miss spending time with her friends who won’t be returning.

“I really love basically everything about Miami, like classes and I love all the buildings and things that they offer, but I think it’s the people you have those experiences with that make all the difference,” Shadovitz said.

Shadovitz and King became friends with Remaley during their freshman year, as they were dorm neighbors. Eterno joined the group during sophomore year after meeting Remaley and Shadovitz through their sorority.

“We all just get along,” said Shadovitz. “We kind of just help each other out and have fun.”

Whether it’s making banana bread, playing board games or belting out Taylor Swift songs at midnight, they’ve made many memories before and during quarantining in Oxford.

Eterno was a marketing major from East Meadow, New York, who will take a sales position with Coyote Logistics later this year. Even though Eterno enjoyed spending time with her roommates during quarantine, she, like many others, was disappointed to not have a traditional graduation.

“I was definitely upset about it all,” she said. “Every time the president (of Miami) sent out another email, I was nervous to open it.”

Despite the early end to her college experience, Eterno has many memories she can look back on. Whether it’s meeting her best friend on a Phi Mu canoeing trip or Target runs with her roommates, she recognizes the impact Miami has had on her life.

“When you break out of your routine, it’s the most memorable stuff.”

But they are nostalgic about Miami…

Remaley was an early childhood education major from Murrysville, Pennsylvania, who hopes to teach either kindergarten or first grade in Boston. Remaley completed her student-teaching last fall, and was excited for a less-busy spring semester before she graduated. Instead, her time got cut short.

“We came home from class, and then they canceled classes for the rest of the semester,” she said. “We had our last college class and we didn’t even know it.”

Although senior year ended earlier than expected, she is still thankful to Miami for making her feel at home in Oxford.

“I didn’t feel like I was just one of a million,” said Remaley.

Remaley said she will miss being with friends, and enjoying her favorite Oxford venue, Skippers. She thinks she will be most nostalgic for Miami’s campus itself.

“I’ll never take for granted walking through campus when it’s snowing or when it’s like super nice outside and the leaves are coming out,” she said. “Those are just things that I’ve looked at throughout my four years and it never really changes, but also I never stop appreciating it.