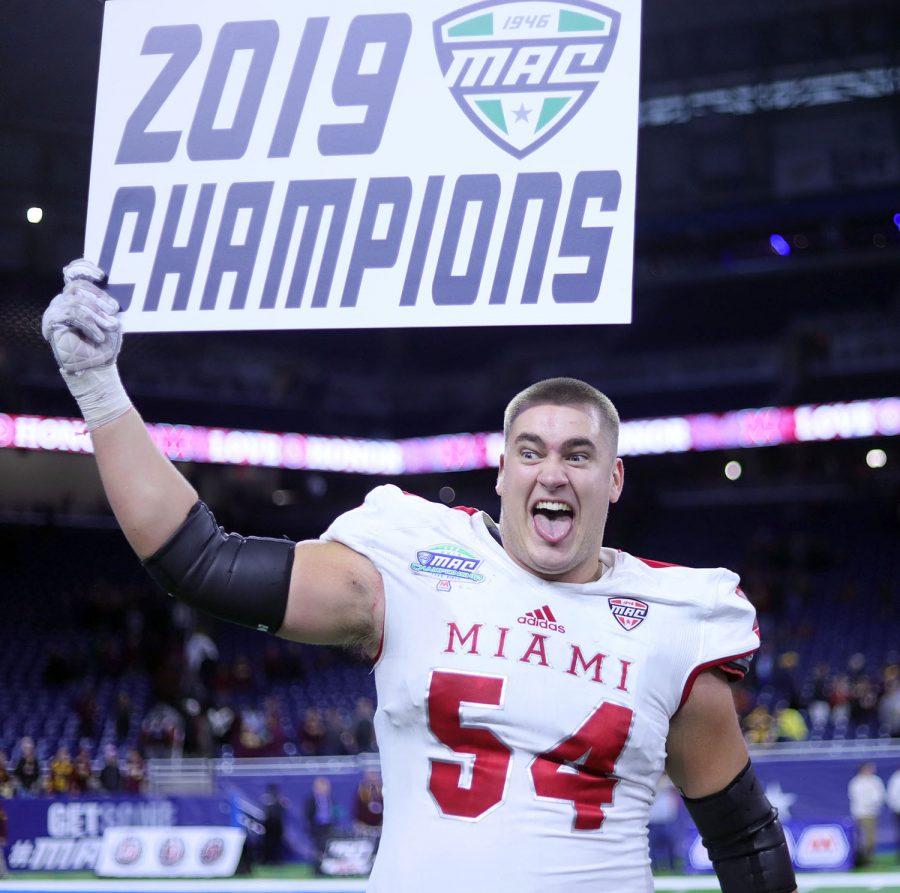 Offensive lineman Tommy Doyle earned first-team All Mid-American Conference honors. He started 11 games at left tackle and helped pave the way for the RedHawks to rush for 133.1 yards per game and 28 sacks allowed, seventh-fewest in the MAC. Photo by Shelby Frieszell

Welcome to a new era of Miami RedHawks football.

Miami plays Louisiana Jan. 6 in the Lending Tree Bowl in Mobile, Ala.

Last Saturday, Dec. 7, Miami (8-5) beat Central Michigan 26-21 to win the MAC Championship. This is the first time the RedHawks have won the conference title game since 2010 when the team beat Northern Illinois 26-21 at Ford Field in Detroit. Miami has been crowned the MAC Champions 16 times.

The first half of the game belonged to the Chippewas as Central Michigan outgained Miami 164 yards to 61 and took a 14-10 lead into halftime.

The RedHawks have been an underdog in every game but three this season and the team has really rallied behind that identity, even though they don’t consider themselves to be underdogs.

“Especially after the first four games, that was a tough start to the season, we knew how good we were, how high our ceiling was, we really embraced it when everyone counted us out,” said senior placekicker Sam Sloman. “It helped us play to the best of our ability and go win some big games down the stretch.”

The first half was all Chippewas, but the second half was a different story.

Behind three second-half Sloman field goals and a solid defensive effort, the RedHawks outscored the Chippewas 16-7 in the second half. Jack Sorenson led the RedHawks with eight catches for 123 yards and a key touchdown in the second half, earning him the offensive MVP of the game. On the defensive side, Emmanuel Rugamba led the way with 11 tackles and was named the defensive MVP of the game.

Defense was going to be a key factor to the game, and head coach Chuck Martin knew this going into the game. 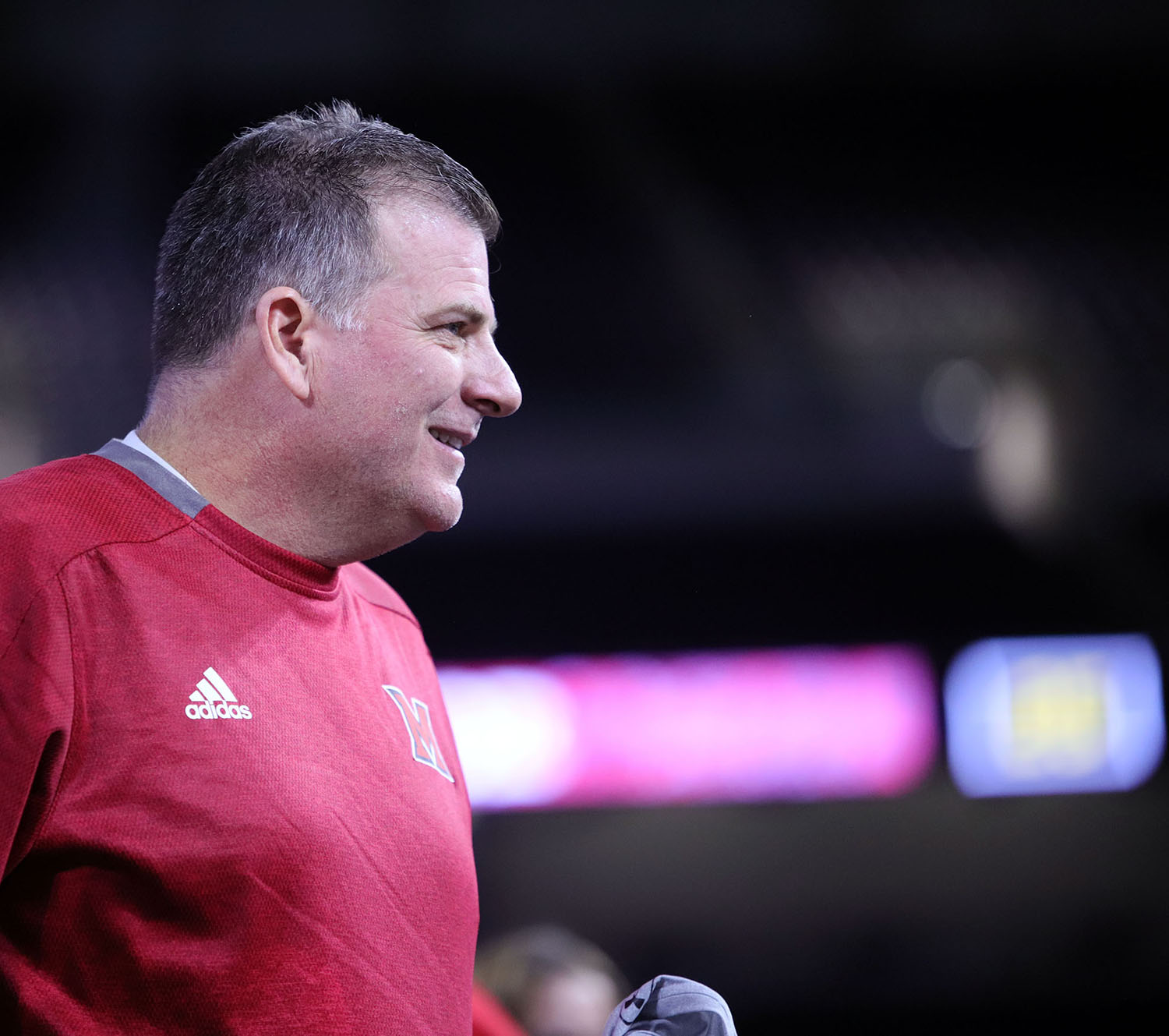 Chuck Martin’s team got over the hump and won the Mid-American Conference Championship game for the first time in his six-year tenure. Photo by Shelby Frieszell

“The media was telling me how high scoring [the game was going to be] and I kept telling everybody, ‘well, if it’s going to be high scoring, then we probably won’t be a part of it, a high scoring game is probably not a good thing for the RedHawks,’” Martin said at his weekly press conference. “Because that probably means that we’re not stopping them, and we’re not equipped to play that type of game, that’s not how we win games.”

How they’ve won games all season is to keep the opponent in the mid-twenties, and win the special teams battle, something they did again on Saturday as placekicker Sloman stole the show.

Sloman went 4-4 on field goals including kicks from 41, 33, 38, and 42 yards and 2-2 on extra points. He was named the special teams MVP of the game. He finishes the regular season second in the nation with 25 field goals made.

The team has come a long way since the fall of 2016 when Sloman was a freshman living in McFarland Hall on North Quad, a five-minute walk from Yager Stadium.

You can check out the team’s progress on this interactive graphic by Massillon Myers.

“My class coming in, we kind of knew what we were getting ourselves into, but we also knew that coach Martin and the couple classes before were also on the same mission of turning this program around,” said Sloman. “It feels great knowing that after a few years, you’re able to have that season that helped spark it. I just think it’s really everybody really buying into what it means to play football here and set the standard here at Miami for teams to be great and win a MAC Championship every year.”

The guys from the “classes before” came back to support the RedHawks in Detroit on Saturday. Former quarterback Gus Ragland (‘18), wide receivers Sam Martin (‘17) and Jared Murphy (‘17) were in the stands to watch their former teammates beat Central Michigan. For Sorenson, it was cool to see them in the stands.

“After the game when we were going and giving everybody high-fives, I saw a bunch of the guys I used to play with like Sam Martin, Gus (Ragland), Murph, all those guys were up in the stands and I went to give one of them a high five and he took my arm and just pulled me up over the ledge,” said Sorenson. “It’s really cool just because you see those guys put in some much groundwork and kind of lay the foundation for what we got to build off of. The chance to celebrate with them was really priceless.” 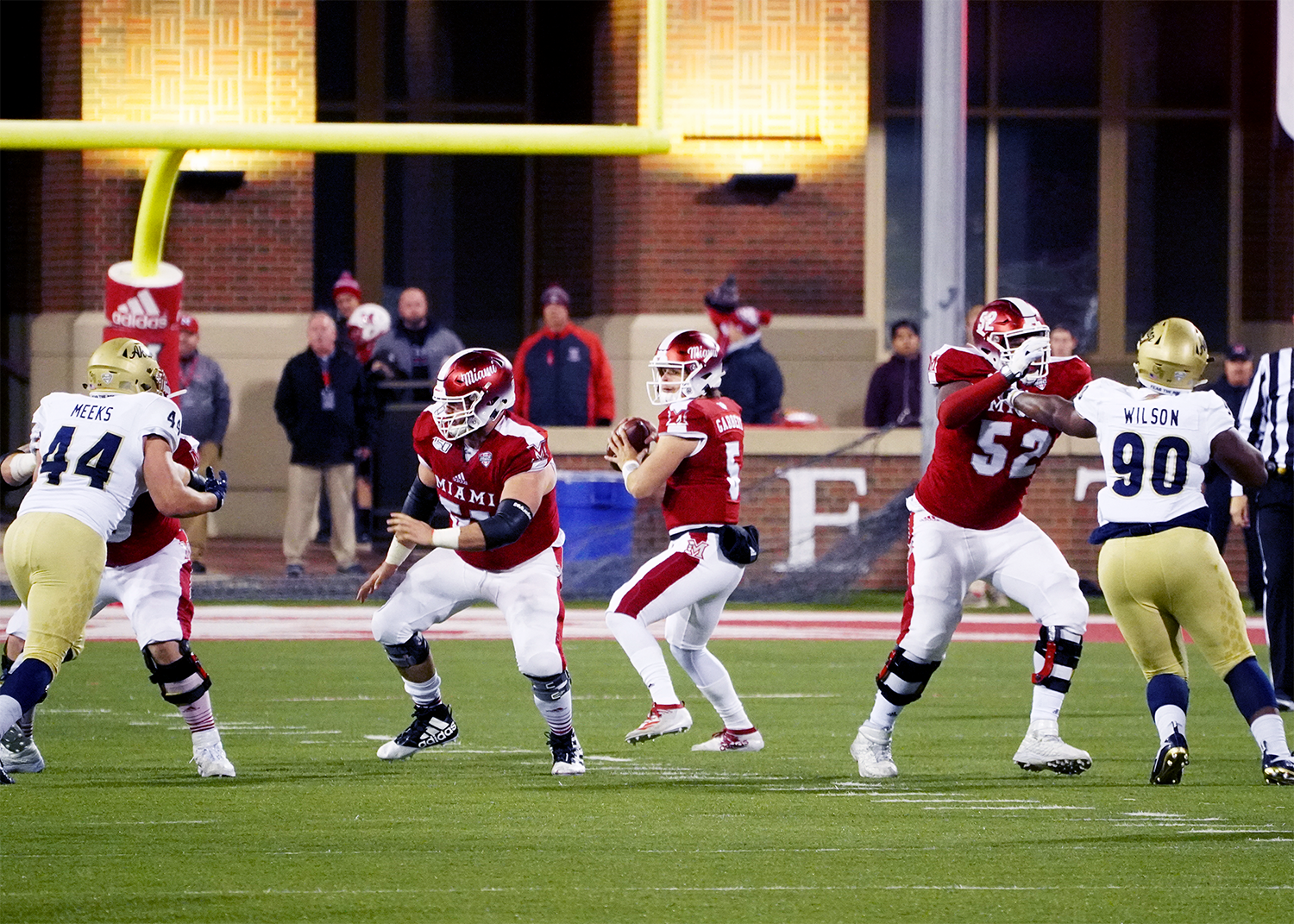 Brett Gabbert (center) became the first true freshman at Miami to start the season opener when he took the field against Iowa Aug. 31 at Kinnick Stadium. Since then, the Saint Louis, Missouri native has passed for 2,163 yards, 11 touchdowns, eight interceptions and led the RedHawks to an 8-5 record and a MAC Championship. Photo by Logan Stevens

Gone are the days of two-win seasons. Chuck Martin has transformed this program into a steady MAC contender. Since he took over as the 36th head coach at the “Cradle of Coaches” in 2013 after Miami’s 0-12 season, the team has seen the number in the wins column increase each season, except for a dip down to five wins in 2017.

Martin rebuilt the roster from the ground up and has the RedHawks fired up and contending for a MAC Championship every season.