Pyfrin Marks 43 Years as the Voice of Talawanda Football 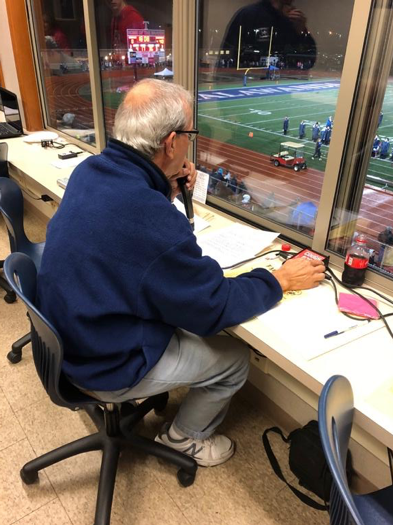 Joe Pyfrin calls a game during his 43rd season as the announcer for the Talawanda High School football team. Photo by Halie Barger

Joe Pyfrin looked over the Talawanda football stadium on the night of Oct. 12, as he prepared to announce the varsity football game against Edgewood. His strong, powerful voice traveled over the stadium in echoes:

“Welcome to Talawanda, Home of the Braves!”

Pyfrin, 71, just closed out his 43rd season as the voice of the Talawanda Braves, having announced every home varsity football game since 1975. He looks forward to being in the announcer’s booth when season 44 starts next fall.

Talawanda’s 2-8 record this season means less to him than being able to connect the community to the game on the field. For him, it’s about giving people the recognition they deserve.

“What I enjoy the most is still being a part of the event to provide a service and get as many names of those that are participating, both directly and indirectly, out so that they can be recognized,” Pyfrin said.

That ambition to recognize as many people as possible is clear during football games. He uses the mic to recognize a fan he spots, who took his driver-training class decades before, or a Talawanda graduate remembered from his days as the school’s assistant principal, who he sees climbing into the stands.

Head Coach J.D. Vonderheide said Pyfrin has had an impact on many in the Talawanda community.

“He is as important as the T, to Talawanda” Vonderheide said. “He’s just one of those people, every time you see him, he lifts you up.”

A Lifetime at Talawanda

Pyfrin’s time in Talawanda long predates the day he first stepped into the announcer’s booth. He came to Talawanda as a high-school freshman in 1959, and he knew no one when he walked through the doors.

That first day of his freshman year, Pyfrin met the woman he would one day marry, Angela Spicer. The two were assigned to sit across from each other in homeroom, and, from then on, Angela knew that Joe was a charmer.

“He had dimples and I like dimples,” Angela said.

Fifty-nine years later, those dimples are still prominent on both sides of Pyfrin’s face when he smiles. Now, Pyfrin and Angela have three children, all of whom attended Talawanda Schools, and five grandchildren.

“I got to work with some of the finest educators and with many interesting students who have over the years become friends, parents and successful members of this total community,” Pyfrin said. “I like to feel I had something to do with it.”

His passion for teaching and coaching is deeply rooted in the experiences he had as a student at Talawanda.

“My favorite times revolve around my athletic participation in football and baseball,” Pyfrin said.

Pyfrin became the announcer at Talawanda after years of coaching for the football team.

“At the time it was felt that an administrator couldn’t take time from his job, and also coach at the same time,” Pyfrin said.

So, Pyfrin stepped away from coaching to focus on his assistant principal role. However, new opportunities came about.

The football announcer at the time had to take a leave of absence, so Pyfrin stepped in on an interim basis, only to become permanent when the other announcer never came back.

Room for Family in the Booth

Pyfrin is a member of the Talawanda Athletic Hall of Fame for his playing days on the football and baseball teams and for his service as the announcer.

Pyfrin’s family also is heavily involved in the Talawanda community. His daughter, Janna Eason, is a coach for the varsity cheerleading squad, and a guidance assistant at Talawanda Middle School.

“After I graduated, he was never allowed to say the best cheerleaders in the land because I was the best,” Eason said.

Eason’s favorite part of her dad announcing was that he was able to watch her cheer.

“Just knowing that he was up there” Janna Eason said. “And that my name was always going to be pronounced correctly (Jah-na, not Jay-na).” 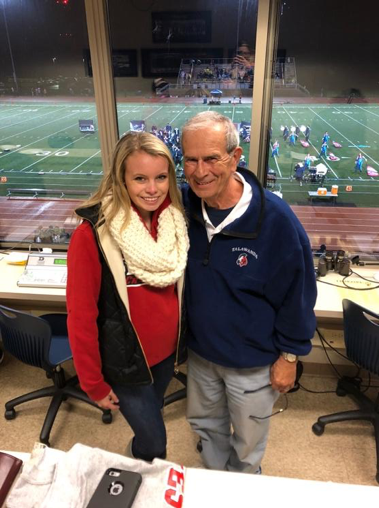 Pyfrin never misses a football game, no matter if it’s home or away. If there are 10 games a season, and you consider the break he took during his time in college, since 1959, Pyfrin has attended around 500 Talawanda games.

This is something that the family jokingly gives him a hard time for, because he has often missed seeing his granddaughters cheer at nearby rival, Ross High School.

Granddaughter Maggie Eason graduated from Ross in May, and now cheers at Miami University, just like her older sister, Mackenzie. One of Maggie’s favorite memories of Pyfrin announcing was the day he announced her as his granddaughter during a Talawanda/Ross game, even though she was cheering for the opposing team.

“Everyone was mad, but I was like, ‘That’s my grandpa. What do you expect?’” Maggie said.

When he sits in the announcer’s box, Pyfrin’s family often surrounds him. His grandson, Joseph Eason, sat right behind him during the Edgewood game, watching him announce and catching up on what happened at school that week.

Then it was back to the activity on the field: “Ladies and gentlemen, please welcome the largest student group at Talawanda, the Talawanda High School Marching Band!”

The Braves lost that game against Edgewood 54-0, but Pyfrin kept his enthusiastic tone through to the end.

He continues to announce the football games, and he also teaches driver’s ed on weeknights at the local driving school. Now retired, he enjoys spending his free time with his wife, kids and grandkids.

For Pyfrin, his love for Talawanda will never leave.