Police Will Move Into Renovated City Building in January 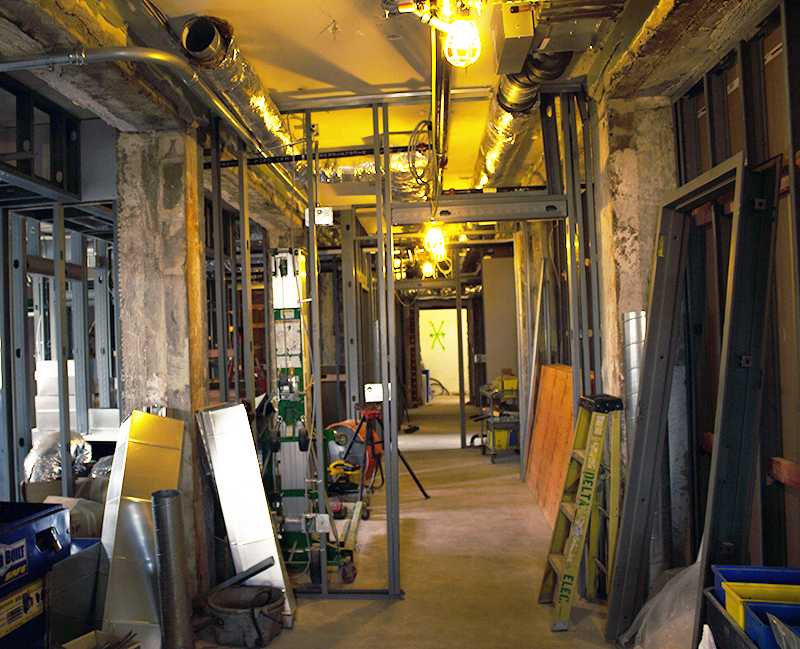 The interior of the former Oxford Municipal Building has been gutted and remains under construction. Photo by Tyler Pistor

Public safety in Oxford is on its way to being more streamlined with the renovations and expansion being made this year to Oxford Police Department facilities, officials say.

Police space formerly was in building’s basement, with an entrance on Poplar Street. Now the police will occupy the whole building.

Police Chief John Jones says that a contract for the work was signed with Empire Building for $3.74 million, with a contingency fund of $374,350.

Renovations began in May, when city officials and staff permanently moved to the former Lane Library building on South College Avenue.

Since then, the interior of the old municipal building has been gutted.

Police Lt. Geoff Robinson said that his department expects to move in in January.

And it makes sense to give police the tools they need to serve Oxford, said Deirdre DeLong, a member of the Police Community Relations and Review Commission.

“This community has grown exponentially; the police department is growing,” DeLong said. “And like any other thing, they outgrew the physical confines of that building.”

OPD has 46 total employees, 27 of whom are sworn officers.‍

A Tour of the New Building

The exterior of the old municipal building is being upgraded, but the majority of the inside will be brand new.

The holding area at the OPD will remain the same once renovations are finished; three cells and the booking room will be able to accommodate 11 prisoners.

“Probably the coolest part of (the renovation) is that we’ll have a drive-in Sally Port, so we’ll have two bays — basically a two-bay garage that can fit very easily two cars and some other equipment,” said Robinson. “That way we have a secure place and if we’ve got a prisoner that we need to bring into the jail, we can actually drive in, shut the doors around them and walk them back to the jail.”

Robinson added that the building will be getting an updated fire alarm system, as well as a new computerized lock system, where officers will be able to access doors by swiping in instead of punching in a key code on the door.

Some new areas were designed specifically for special public needs.

“What we’ve included in this building is what we call a soft interview room… a little nicer area that if we have to sit with somebody who’s been a victim of a crime or a witness of a crime, that’ll make them feel a little bit more open and not that they’re in such a sterile, clinical environment that you find yourself in in a regular interview room,” said Robinson. 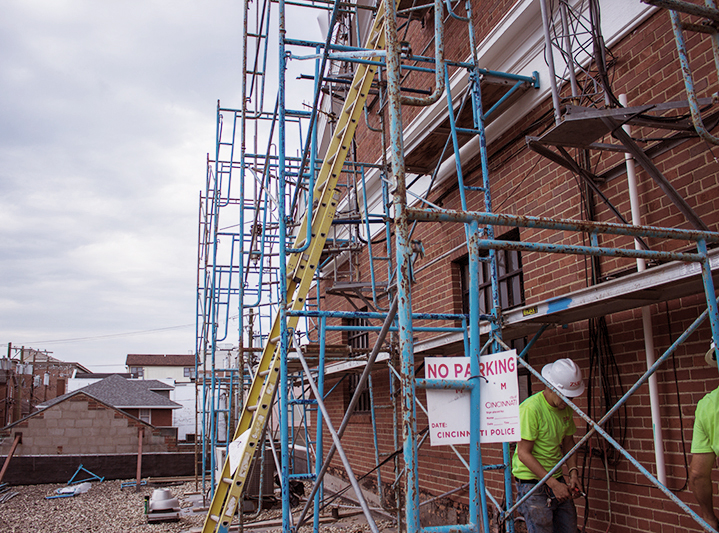 ‍Construction workers have been working inside and outside to renovate the old municipal building. Photo by Tyler Pistor

There also are plans to build a training room on the first floor of the building, which can accommodate more officers than the old Oxford Police Department could.

“Down the road, to kind of make things even more effective, we hope to host some of those trainings here and bring people from outside agencies to come see what the city of Oxford has built for the police department and really show off and showcase the investment the city’s made,” said Robinson.

Improvising while construction is underway

Change always comes at a price. Officers have run into some downsides while they wait for the renovations to be completed.

“Sometimes when we come up, we have no parking, because there’s a crane or concrete truck or a welding truck there,” said Robinson. “Some days they come in and they can’t get to their offices because there’s a 6-foot trench running down the hallway.”

Parking will remain on the side of the building, the police chief said, and additional car storage will be located at an impound lot that Oxford Police already has access to.

Until the project is complete, OPD has to improvise on space.

“We don’t really have good places to meet people or bring in members of the public… normally you would hear saw cutting, jackhammering,” explained Jones. “It just makes it very difficult to work sometimes, to have a phone conversation even.”

No jobs have been lost during this renovation, Jones said, but the temporary quarters has crammed employees together, which has affected work routines.

“It does kind of kind of affect your efficiency and effectiveness to some extent, but again, I think in the end that this’ll be well worth it,” said the police chief.