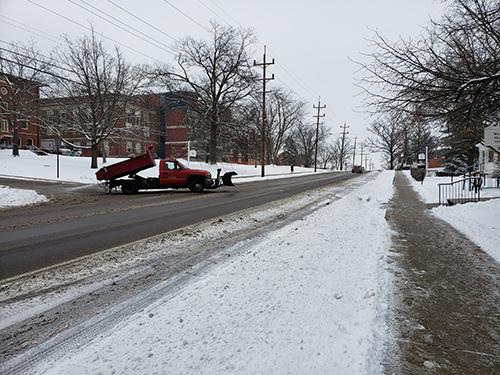 Snow overnight on Thursday caused a two-hour delay for the start of classes at Miami on Friday while salt trucks such as this one on Spring Street treated the roads. Photo by Ben Corwin

The extreme cold of Arctic winds closed schools in Oxford this week, causing people to hunker down at home or inside a favorite hangout. But by the time you read this, temperatures should be back up near seasonal norms and by the end of the weekend, it could be downright balmy.

A polar vortex froze the Midwest and headed east beginning on Wednesday with temperatures below zero and wind chills reported in some areas as low as -30 degrees. The Associated Press reported at least 21 deaths across the nation attributed to the weather since Wednesday, including vehicle accidents and cases of hypothermia.

“School districts have to consider students waiting outside at bus stops and buses making safe passage over country roads, so their concerns are slightly different than ours,” said Claire Wagner, Miami’s director of communications. “We knew (Thursday) would warm up and we have been advising students, staff and faculty for several days to dress appropriately for frigid temperatures. Our physical facilities crew had salted walks and drives just in case,” she said Thursday.

“We always weigh safety of being outside (this time, no snow or ice) and the academic calendar and how much faculty will have to adjust syllabi if we cancel classes.”

Friday’s late start announcement from the university attributed it to a dip in the weather and some additional snow.

The cold forced the cancelation of mail deliveries for certain areas in Northern Ohio, Cincinnati and Columbus on Wednesday. Oxford mail couriers did still deliver for a while, but stopped at 2 p.m.

The weather service warned that “the cold wind chills could cause frostbite on exposed skin in as little as 30 minutes.”

Katie Estes, executive assistant at McCullough-Hyde Memorial Hospital, said Wednesday that no frostbite cases had been treated at the local emergency room. 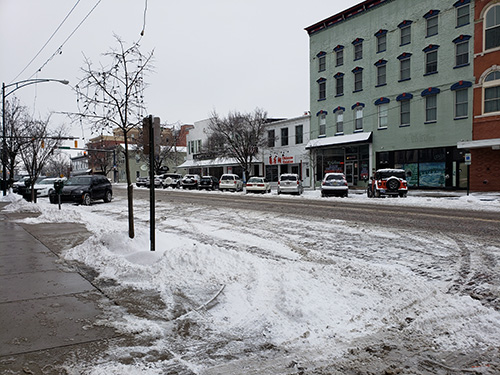 Overnight snow added to the cold in uptown Oxford on Friday morning. Pedestrians along High Street tended to stay inside because of bitter cold, but temperatures were expected to rise during the weekend. Photo by Ben Corwin

Local temperatures were predicted to reach 32 degrees by 5 p.m. Friday and continue to warm into next week. The National Weather Service was predicting temperatures has high as 60 degrees by Wednesday.

But just in case they go back down, the Ohio Emergency Management Agency issued a few tips for protection from extreme cold:

In an email sent out by university communications, students were advised to dress warmly and given tips on how to do so, along with the warning signs of hypothermia:

Wear several layers of warm clothing to avoid exposure to water and wind Cover your head because approximately 30 percent of heat loss occurs through the headWear dry gloves or mittens, scarves, socks, and boots to conserve heatMaintain metabolic heat production by consuming adequate food and fluidsDrugs and alcohol impair judgment and can play a role in developing frostbiteDon’t be outside longer than you need to be