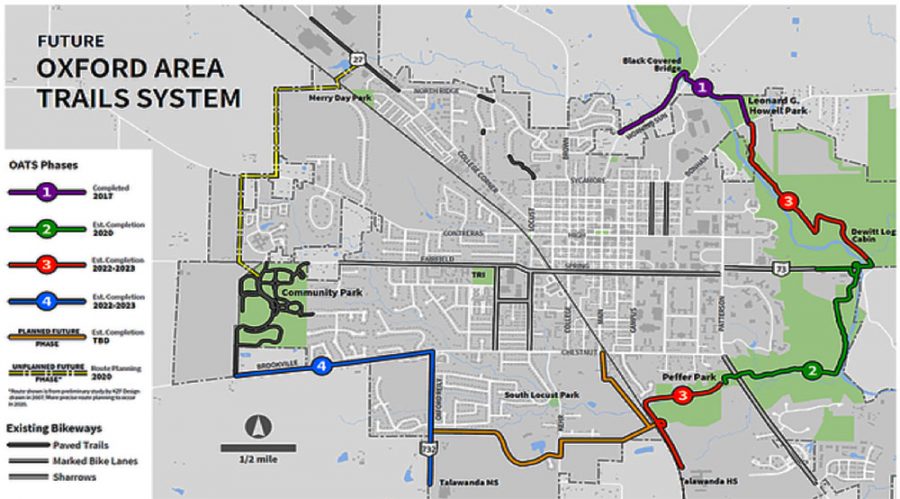 When Karen Stohs Powell’s 91-year-old mother visits Oxford, the mother-daughter duo are not interested in staying indoors. Despite their eagerness to remain active, safety and accessibility are large concerns.

‍“[I] don’t want to slip or slide or trip over rocks,” Powell said.

The Oxford Area Trails provide residents like Powell and her mother the opportunity to hike or bike on a mostly paved trail that is accessible to many different members of the community. The first phase of the project was completed in 2017, while subsequent phases are planned for the future.

As an athletically built, middle-aged woman, Powell said she tries to walk her two dogs every day to keep herself and her aging pets active. She estimates that she walks between two to four miles a day 250-300 days a year, with the Oxford Area Trails being her go-to most of the time. During her time spent on the trail, she has seen a wide variety of usage.

“(I see) parents with their children, runners and joggers from Miami,” Powell said.

Matt Valiga, a junior zoology major and president of Miami’s Birders Club, frequently uses the trail for personal use as well as club-wide hikes. His bushy beard and grey backwards hat pair well with his love for the outdoors. He attempts to visit the trail once a week and says that he has a really good experience every time he makes the trip.

“(The trail) is very well maintained,” Valiga said. Specifically, in comparison to “various signs of use at Hueston Woods.”

This upkeep as well as the completion of the phases planned to connect the trail around the city of Oxford require a large amount of funding. Although the OKI Regional Council of Governments will fund $3.5 million through grants, the rest of the project must be funded by the Oxford community. In May 2018, the city of Oxford passed a levy that will contribute $10 million for the trails over the next 10 years.

Jessica Greene, Oxford assistant city manager, heads the Oxford Area Trails Community Organization (OATCO) which brings awareness about the levy and the trails in general to the community.

“The long term goal is to have inner-city connectors,” Greene said. She said she hopes the trail will attract more visitors to Oxford.

While on the trail, Powell has already encountered visitors from around the area. Toward the end of spring and into the beginning of summer, she often saw a group of teenagers running the trails a few times a week. She initially thought they were Talawanda students, but upon further investigation she discovered they had travelled from Hamilton to take advantage of the paved hiking path.

“I hope (the trail) catches on more,” Powell said. “People need to get out more, walking and biking makes you invigorated.”

In her opinion, this invigoration far exceeds improvement in people’s physical health and well-being. Powell said that the trail provides a place for individuals to decompress and focus on mental and emotional stability.

Students like Valiga already are reaping the benefits of the trail and look forward to the future expansion efforts.