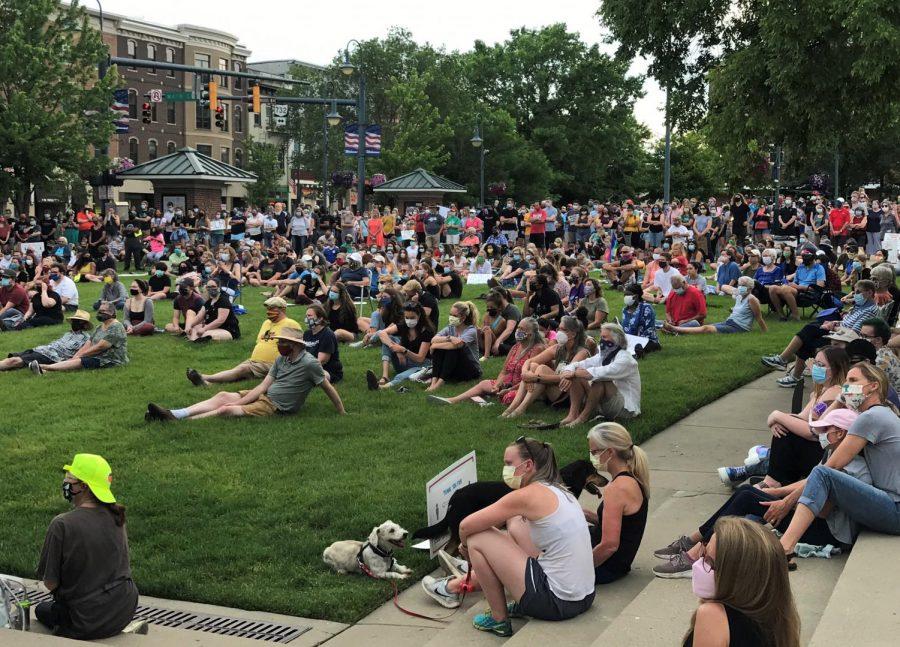 Hundreds of members of the Oxford community gather in Uptown Park on June 8 for a community vigil against racial injustice and police violence. Photo by Susan Coffin

Hundreds of people from around the Oxford area gathered Monday in Uptown Park for a peaceful vigil in recognition of George Floyd and others who have been killed by police brutality.

The vigil was a way for the Oxford community to support changes the Black Lives Matter movement hopes to achieve. Signs and flags were welcomed, but LaTricia Hillman, who organized the event, asked that at 7 p.m., when the vigil began, that all signs and flags be put down. The goal was for this to be a peaceful way for all to mourn and have their voices heard.

Hillman started off the vigil using powerful words to explain why she wanted the community to gather for the event. 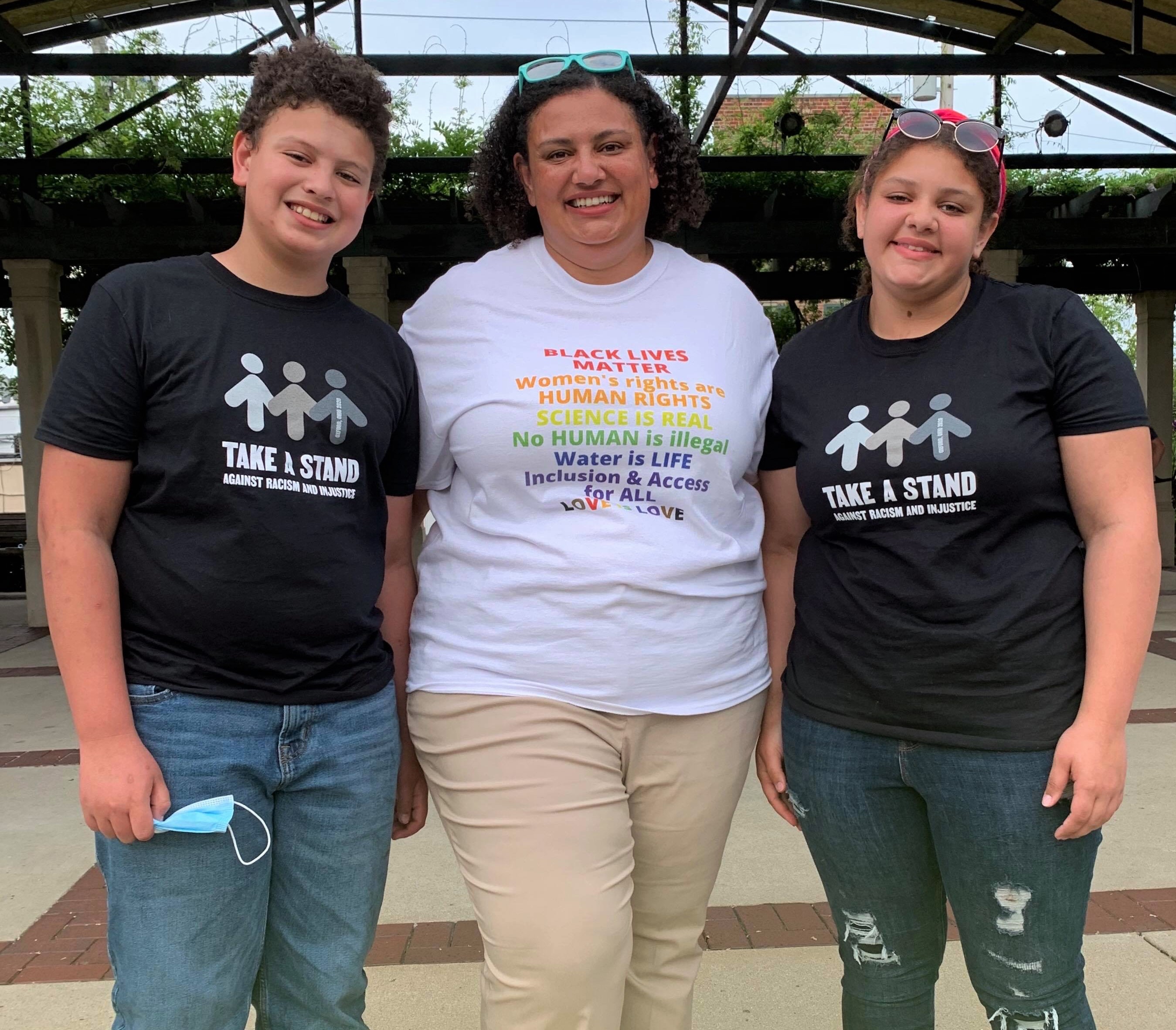 The audience cheered and applauded, as speakers gave their thoughts on the matter. Others drove by, honking to show their support of the cause, while still social distancing in a way that made them feel safe.

“I felt really good, I was amazed at the crowd,” said Mayor Mike Smith, who attended and spoke at the event. “I think it’s probably the biggest crowd I’ve ever seen at that park. I don’t think any of us really thought how many people might show up.”

Hillman thanked the City of Oxford, Oxford Police Department, Miami University Police Department and Oxford’s chapter of the NAACP for all their support in making her vision into a reality.

Along with Hillman, Police Chief John Jones and the mayor each spoke, along with many others. The voices heard included Amber Franklin, a member of the city’s Police Community Relations Commission, and Miami University President Gregory Crawford. 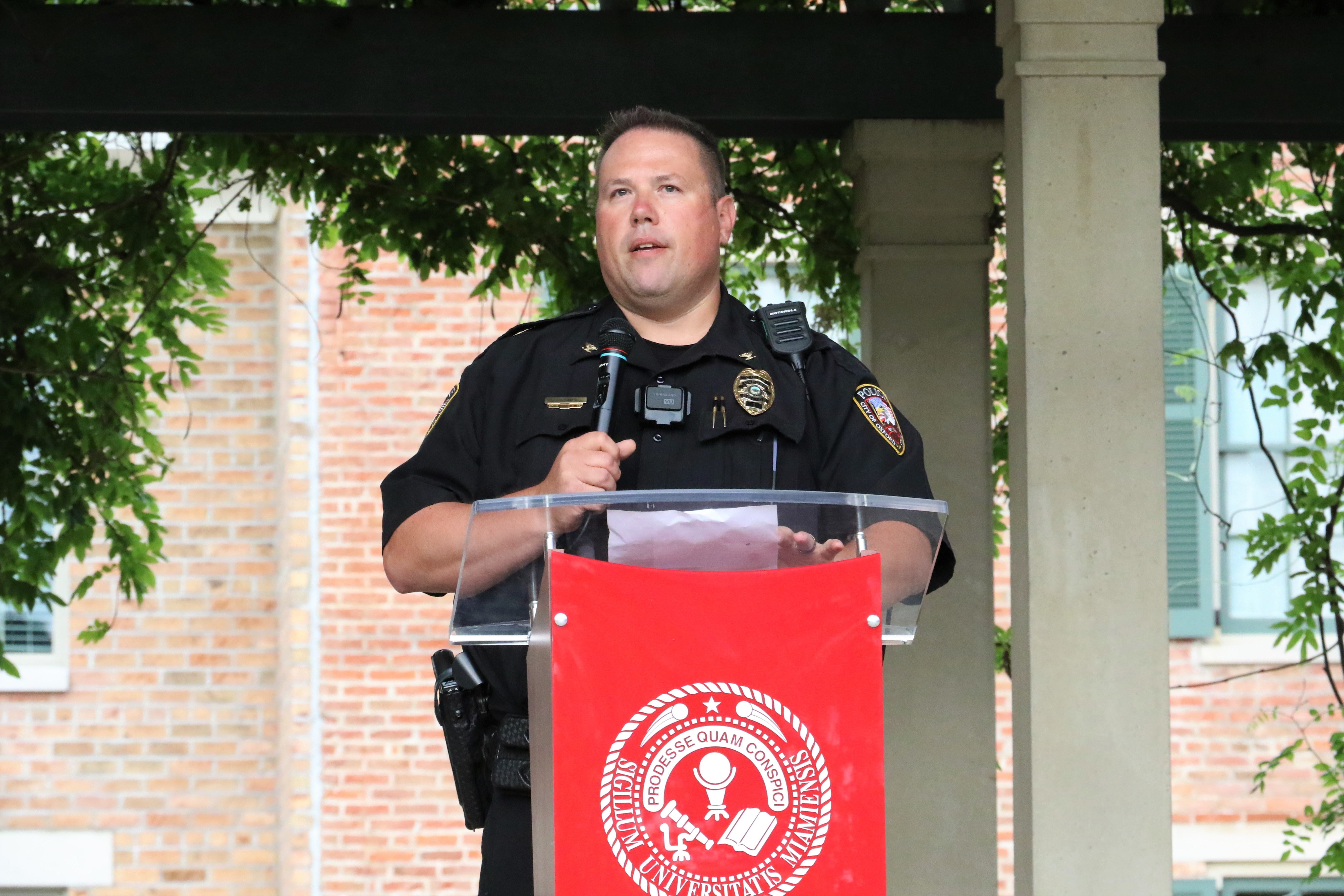 Oxford Police Chief John Jones tells people at the vigil he was “ashamed” of what happened to George Floyd. Photo by Rosemary Pennington 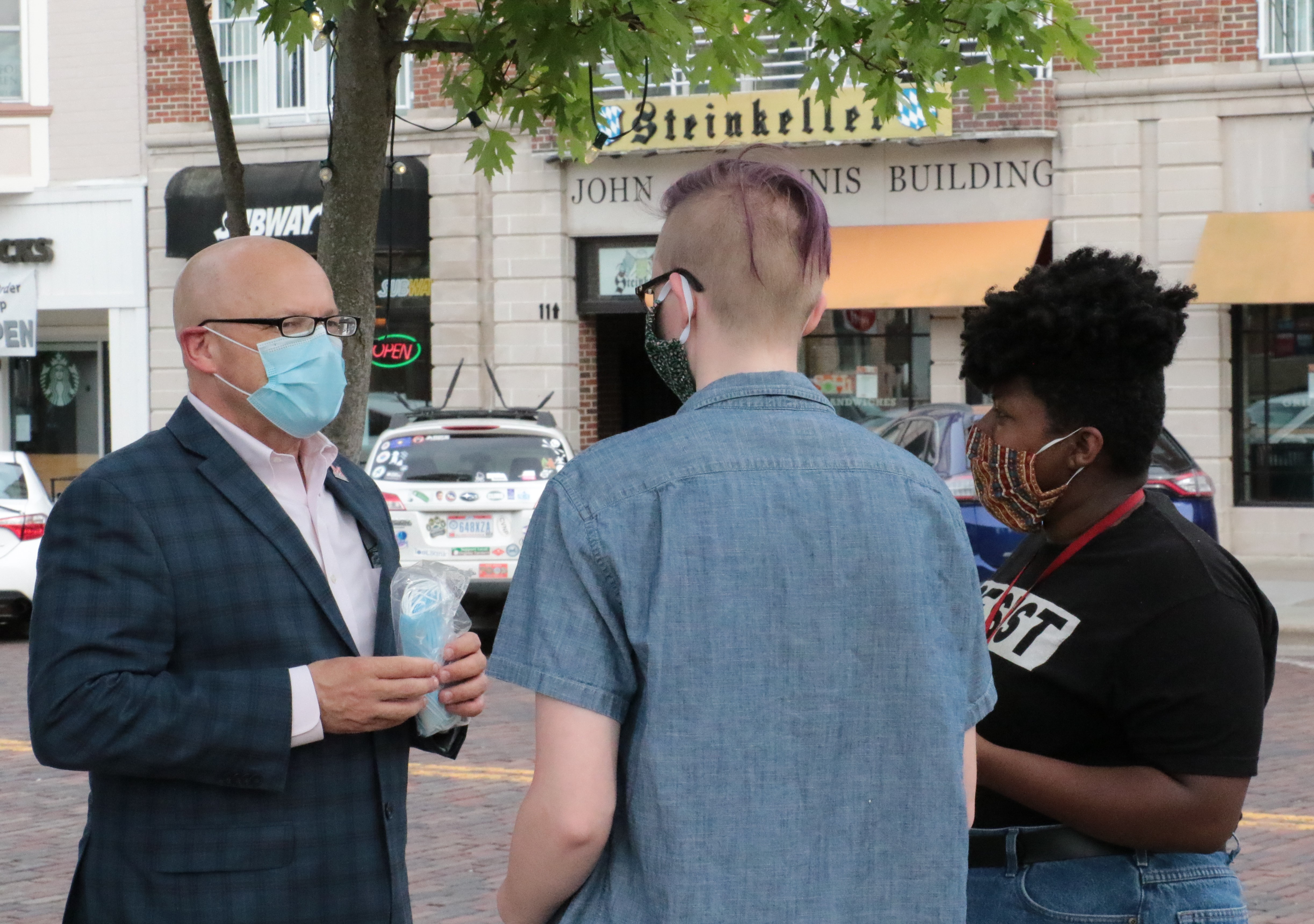 Instead of combining this vigil with the peaceful protest and march through Oxford on June 4,  Hillman made it clear that the vigil would not be a protest nor a march. Her belief was that “this will be a starting point for real change.” 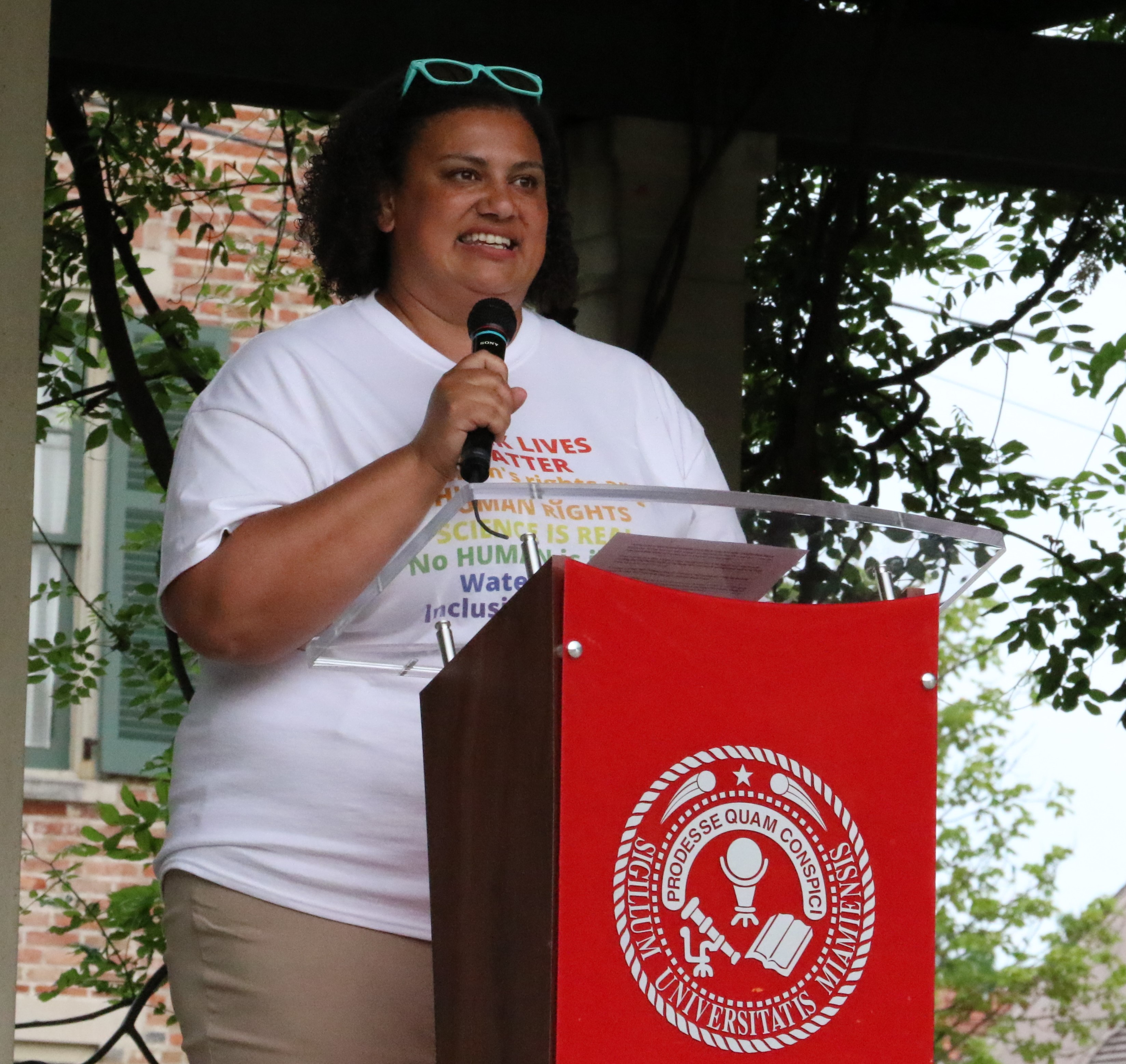 LaTricia Hillman organized the event as a peaceful way to mourn. Photo by Rosemary Pennington

As most of the protests across the nation deal with the actions of police, Chief Jones was asked to speak on how he thinks the healing process should start. Jones, with many police chiefs, has denounced the actions that resulted in the death of George Floyd at the hands of officers in Minneapolis last month. Floyd, apprehended in connection with a non-violent offense, suffocated when an officer knelt on his neck for nine minutes. Floyd can be heard pleading for his life and saying he can’t breathe on a video of the incident.

“I want to thank all of you for standing together in solidarity against this injustice,” Jones told the crowd at the vigil. “ I know that the reason we are gathering here is about the death of George Floyd and others (that) are a result of police misconduct and gross violation of human dignity (by) people who wear a badge, like the one I’m wearing. I understand that and I’m ashamed of that.”

Jones said he wants the police department to do more training, work harder on community outreach and work harder to recruit minorities.

Oxford city officials have said that the only way such incidents don’t happen again is to have open and honest conversations about the issues.

President Crawford agreed with this in his speech. “Our society, law enforcement and legal system has failed the black community over and over again. In order to progress and change, we must engage in honest and difficult dialogue. Truth and reconciliation are essential.”

Hillman is the owner and teacher of The Loft Preschool in Oxford. She has been a member of the Oxford community for more than 15 years and is a member of the local NAACP. She created the  Take a Stand Against Racism and Injustice Facebook page to organize and record the vigil.

She asked that anyone with pictures or videos from the vigil that they would like to share message them to her through Facebook. She said she will be creating an album including all of the content she receives.