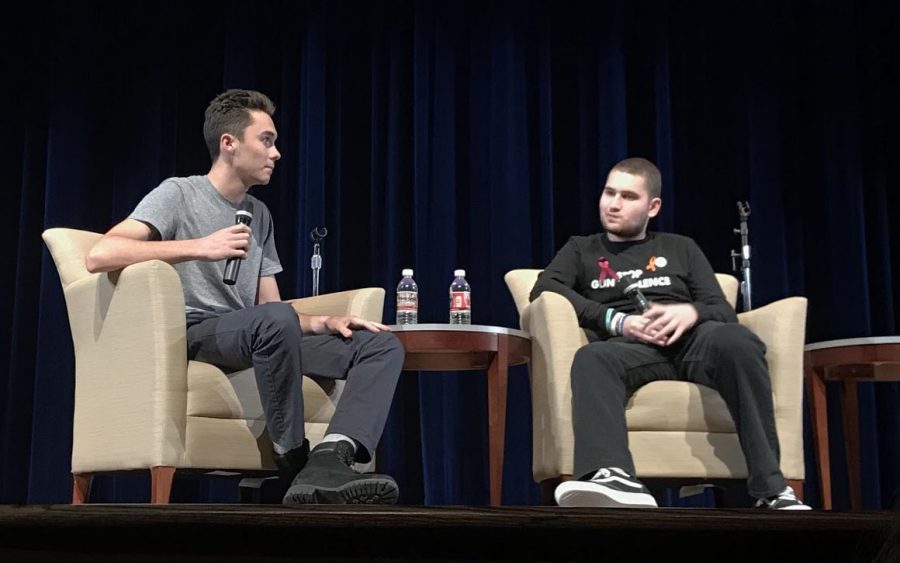 After surviving a shooting that killed 17 people at his high school, Alex Wind refuses to believe there is no way to end such tragedies.

“We will not and cannot accept that there is no solution to end gun violence,” he said in Oxford on Monday night. Wind and fellow survivor David Hogg held a press conference and later delivered a lecture in Hall Auditorium entitled “The Students Voice: Parkland Students Speak.”

Wind, 18, is a senior at Marjory Stoneman Douglas High School, in Parkland, Florida. Hogg, 18, is a former classmate who is taking a gap year to focus on the gun violence prevention movement. He will attend Harvard University in the fall.

Hogg and Wind recently commemorated the one-year anniversary of the tragic shooting that killed 14 students and three staff members at their school on Valentine’s Day last year.

Since the massacre, “Parkland has become synonymous with gun violence,” Wind said.

On Feb. 14, 2018, Hogg and Wind became part of a growing list of gun violence survivors, but are using their experience to advocate for gun violence research and prevention.

A Movement Born Out of Tragedy

Hogg, Wind, and a group of other students organized the gun violence prevention movement March for Our Lives and use social media platforms to spread their message.

On March 24, 2018, there were 800 marches worldwide — on every continent including Antarctica.

One proposed solution for school shootings is arming teachers and militarizing schools; however, the students disagree with this strategy.

“If teachers wanted guns, they would have been cops,” Wind said at the press conference.

Nearly two-thirds of all gun related deaths are suicides, with white men making up 74% of these deaths.

“Young men are taught to not feel any other emotion but anger,” Hogg said. He attributed these higher rates of gun violence among men to toxic masculinity perpetuated in society.

The two speakers believe that gun violence research is an important step to finding a solution to the systemic problem.

Hogg and Wind said that the biggest problem they faced in their movement was misinformation, and they believe that adequate research can help educate both the public and lawmakers.

They said they feel that stricter gun regulations will help prevent guns from getting into the hands of shooters, however, many pro-gun advocates argue that stricter gun laws impede their Second Amendment rights.

“There is no difference between school shootings and everyday shootings,” said Hogg.

In 2016, America had the second highest number of gun-related deaths in the world, behind Brazil. One hundred Americans are killed by gun violence every day, and death by firearm is the second leading cause of death for children and teens.

Hogg and Wind want to attack the source of gun violence, not just in schools, but outside as well.

Hogg had three questions for those wondering why he and his friends want “to take your guns away”:

Young People Must Step Up

They said a next step toward solving the gun violence problem is to get young people to run for public office, starting at the local levels, to challenge corruption and represent the younger generations in politics.

“It’s the young people who are going to stand up and make the change,” Wind said.

As for the future of their movement, Hogg and Wind hope to continue acting as allies for victims of gun violence, particularly in non-white communities, where they believe shootings don’t receive enough attention from the media.

The two encouraged the audience to call their representatives, figure out their opinion, and vote. Their goal is a 71 percent voter turnout in the next presidential election.

As for now, the movement they helped to found continues to maintain momentum as more and more people become survivors or lose loved ones to gun violence.

Hogg and Wind said they are committed to enacting change to end gun violence both in and out of schools in America.

“I want to show that school can be a safe place,” Wind said. “Even at Douglas.”