The smell of cordite, the sight of brass bullet casings, and the report of gunfire are part of the typical date night ambience at the Mayday Gun Range, in Oxford.

What started as a simple promotion for a business has since become a popular Friday night activity for many of Miami University international students.

‍“Date Night” is one of many promotions Mayday offers throughout the week. A pair going to Mayday on a Friday gets a free target and the second shooter in a lane is free. Normally, it costs $16 for an hour of range time and $10 for a half-hour. An extra shooter in a lane typically costs $5 extra.

Trying something not available at home

Nick Quan, a senior at Miami and an international student from China, said he “loves” going to the range. “In China, most people cannot have guns—there are no places like this,” Quan said. It’s not just the guns that keep him coming back. “The people there are very nice and love helping us,” he said. 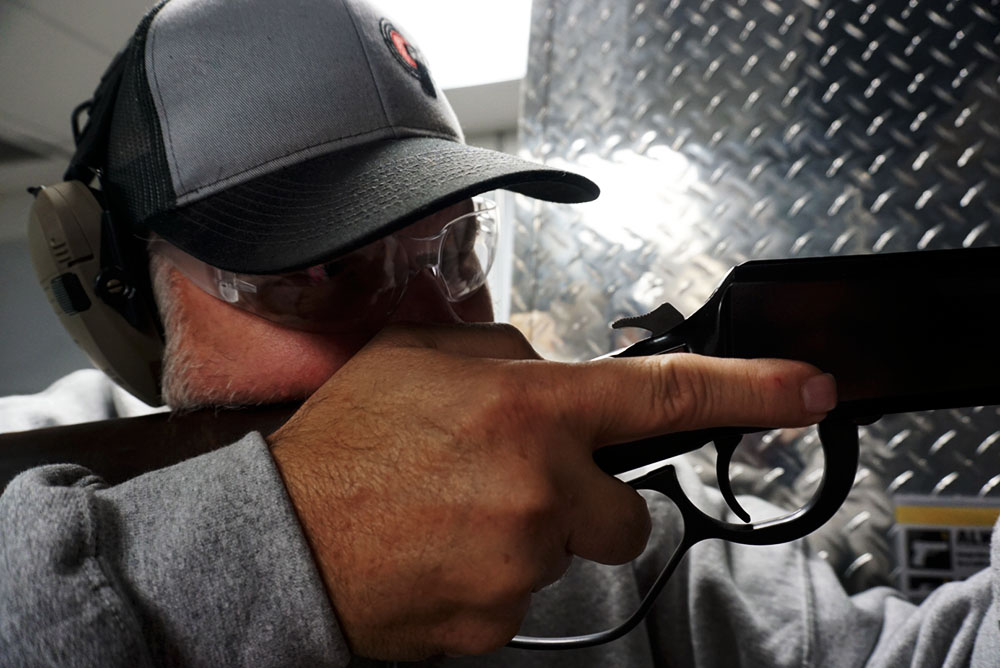 “We were shocked, to say the least,” at the range’s popularity among the Chinese students, said Jeff Day, owner of Mayday. Day is a lifelong Oxford resident and respected firearms instructor around southern Ohio. “We haven’t quite hit the wider student market yet, but the Chinese students have loved coming here almost since the beginning,” Day said.

Leonard Chen, a Miami junior, said he remembers how nervous he was when he first tried shooting at Mayday last winter. Today, Chen has sampled almost every gun Mayday has to offer.

“I was scared first. Now that I have learned, my friends and I go often. We want to be as good as John Wick,” said Chen, referring to the movie anti-hero who never seems to miss. 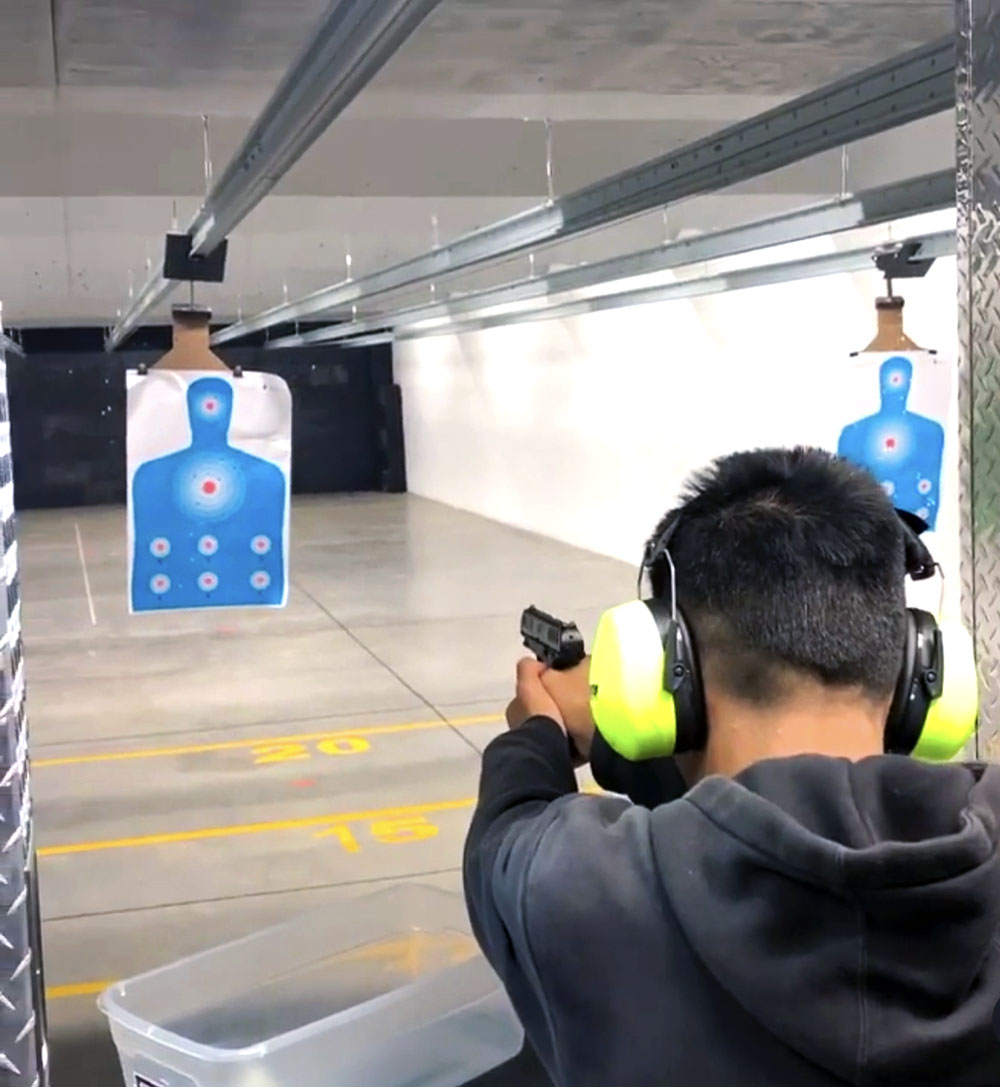 Leonard Chen, a Miami student from China, said he was nervous when he first went to the range. Now a regular customer, he said he has fired almost every type of gun available at Mayday. Photo by Houston Vick

‍Mayday’s indoor range offers two rooms or “bays” featuring six lanes for shooting at targets. Twenty handguns and six long guns are available for rent, starting at $7. The range is open from 10 a.m. to 9 p.m., Tuesday through Saturday; from 10 a.m. to 6 p.m. on Sunday and from noon to 9 p.m. on Monday.

Once peak class hours at Miami are over, around 6 p.m.  or 7 p.m., there usually at least five Chinese students at the range firing at targets, Day said. Miami’s ROTC classes also use the range for training sessions throughout each week. In addition to attracting international students, he said four of Miami’s fraternities and two sororities have scheduled events with Mayday as part of the Greek organizations’ Dads’ Weekends. Mayday seems popular with its customers, garnering five-star reviews on Yelp.com and Google.

Making sure nothing is lost in translation

While welcoming the business of the international students, Day said he and his staff realized that a language barrier presented the same problems other Oxford businesses sometimes experience with students who are not fully conversant in English. They particularly did not want to have any misunderstandings of firearm safety rules.

“Our priority here is education,” Day said. “If you own a gun range and education isn’t your main focus, you’re being irresponsible.”

Thus, Day’s daughter, Moriah—a manager at the range, along with one of the regular Chinese customers, who has since graduated and returned home, collaborated to translate the range’s rules and other firearm regulations.

Moriah Day also helped provide an understanding of the American vernacular associated with firearms. “One of the most common phrases we hear from a new Chinese customer is ‘I want to play guns’,” she said. “It was important to clarify that the word ‘play’ takes away from the seriousness behind handling something that could potentially be dangerous to themselves and others,” she said.

All patrons wishing to shoot at Mayday must first read the rules before they are handed any weapon or ammunition. Today, these rules are available in English as well as Cantonese and Mandarin, the two most widely spoken dialects in China. The Days believe the translation of the rules and regulations helped foster a new culture of loyal customers.

Both Days said several international students completed the Ohio concealed carry permit classes offered at the range. Even though such permits are only obtainable by United States citizens, Jeff and Moriah Day were more than happy to allow several international students to attend their classes and admired their willingness to learn as much as they could about firearm techniques and safety.

“I think there’s sometimes a sort of embarrassment attached to not knowing something among American,” said Moriah Day. “With the Chinese students, they aren’t embarrassed about not knowing much about guns, they want to learn and we’re really happy that we have so many people coming to the range willing to learn.”

Another surprise for Jeff Day came in the form of one of Miami’s Chinese interpreters asking if he would accommodate a group of Chinese high schoolers looking to attend college in the states. The students were going to several major US cities sightseeing and touring colleges, and while checking out Miami, they wanted a side trip to the range.

“These kids were going on tours of New York, Chicago and Cincinnati to see what American cities were like and one of their stops just happened to be right here,” said Day. “There was even a Chinese diving team that was in the states for a tournament nearby and they stopped by to shoot for a while too,” he added.

According to Global Times, one of China’s English-language news publications, China has some of the strictest gun-control laws in the world. Generally, private citizens are not allowed to have firearms of any kind, despite the fact that gunpowder was invented in China over 1,000 years ago. Unlawful possession of a gun in China can result in up to three years imprisonment. The penalty for using a gun in a crime in China often equals the death penalty. A Chinese citizen may apply for a hunting license, but the application process is lengthy with many fees.

“We really just want to give these people an opportunity to do something they can only do here, and if they learn a thing or two while they’re here, that’s even better,” said Day. 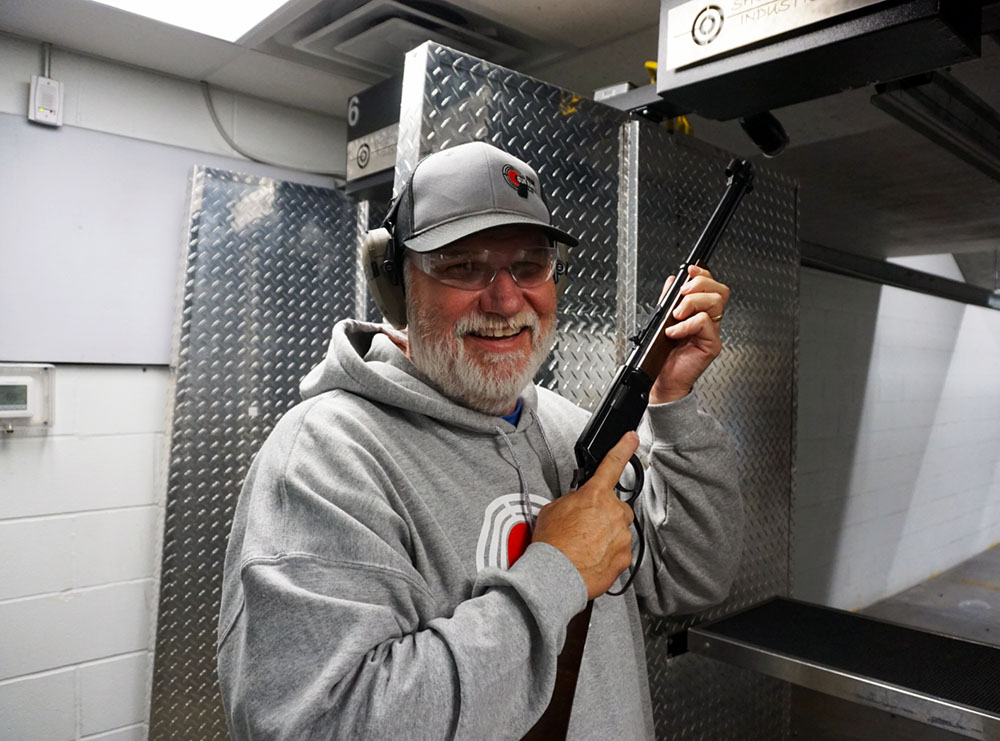 In addition to the Friday “Date Night,” Monday is “Student Day,” when Miami students receive a free target and a discounted price on range time. Wednesday is “Ladies’ Day,” with women receiving a free target and discounted rate. Active duty military and law enforcement personnel can come in and shoot for free every day, Day said. Memberships are available at both monthly and yearly rates. You can learn more at https://maydaygunrange.com