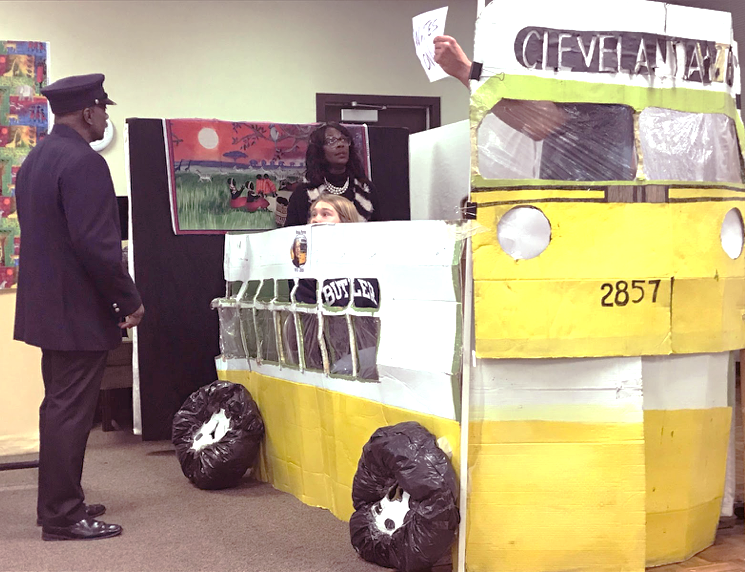 “If it hadn’t been for the Lord, I wouldn’t be here tonight,” said Betty Daniels Rosemond, a member of the 1961 Freedom Riders. Rosemond spoke at the Oxford Senior’s 11th Annual Soul Celebration on Saturday, Feb. 23, to celebrate Black History Month.

Karen Byrd-Gibson, organizer of the event, wanted guests to learn more about African-American history from Rosemond’s personal account as an African-American woman in an area where discrimination and racism dominated.

Bathrooms, buses, schools, drinking fountains, and just about everything was segregated, Rosemond explained while talking about her early life in New Orleans.

“School was separate, but it sure wasn’t equal,” said Rosemond, referencing the 1896 judicial decision under Plessy v Ferguson that legally segregated schools to make them separate but equal.

Jim Crow laws also prevented African-Americans from voting, where they were required to pass voting exams that were designed for failure.

“How black is midnight?” asked Rosemond. “How many stars are in the sky?” Unable to answer these type of questions, Rosemond’s mother was consistently denied voter registration.

On behalf of her mother, Rosemond joined CORE (Congress of Racial Equality) to protest for equal rights.

“I was tired of seeing my mama crying,” said Rosemond.

She told the story of one of her bus rides through Poplarville, Mississippi. A group of white men attacked the other members of her CORE group after they left their bus. Scared and alone hiding in a phone booth, Rosemond received a ride back to New Orleans from a kind man at the gas station where they had stopped.

Despite her dangerous experiences, she would get on the bus again.

“I believe in angels,” said Rosemond.

Segregation Wasn’t Just in the South 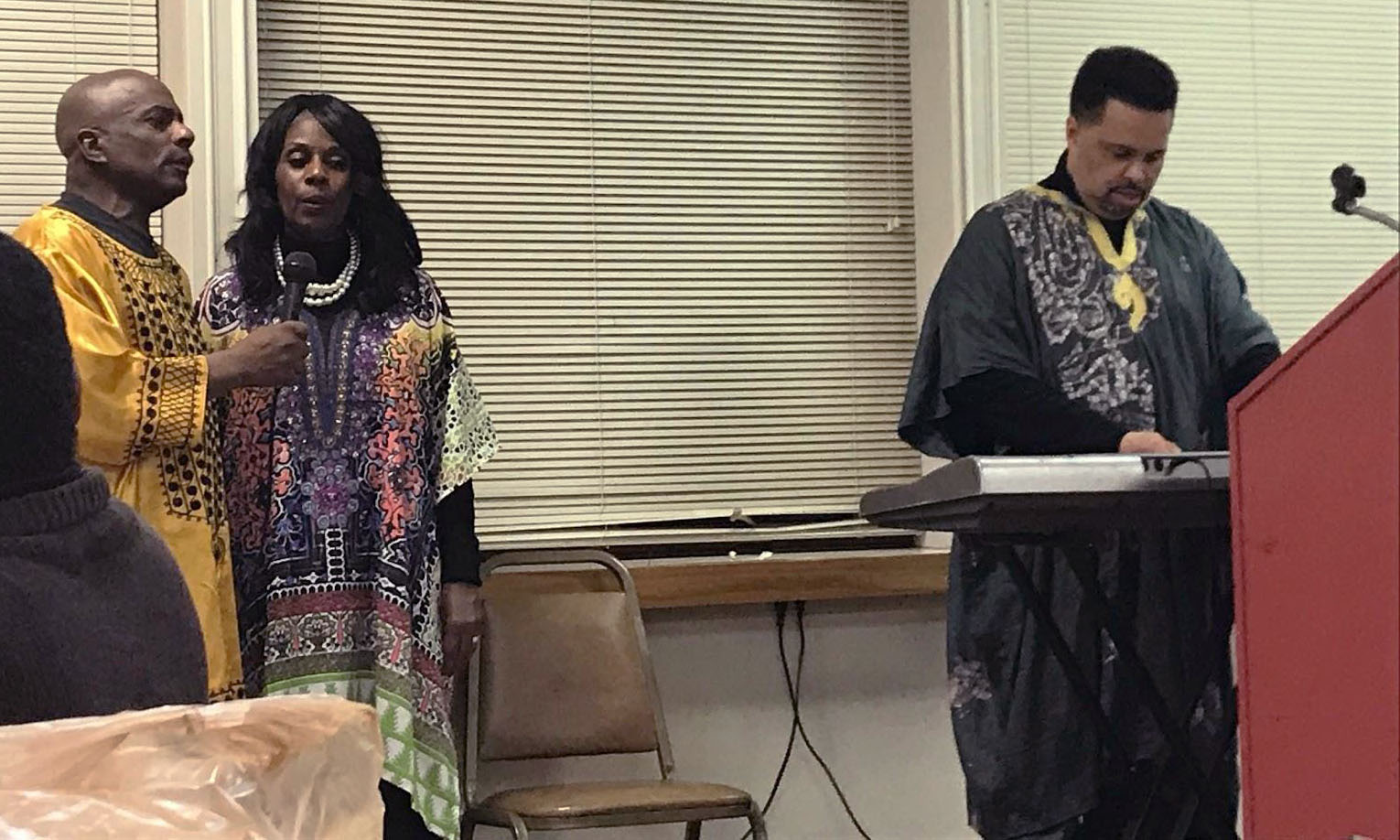 Karen Byrd-Gibson and Rodney Gibson perform a duet with the accompaniment of John Byrd with his keyboard. Photo by Caroline Roethlisberger

When Rosemond later moved to Cincinnati, the racial inequality she endured in the South did not completely disappear. She was surprised to discover the dentist having a segregated waiting room.

Oxford has its own history of racism and segregation.

In 1892, Oxford resident, Henry Corbin was lynched at Uptown Park. He was accused of murdering Georgina Horner, who lived in Mile Square. He received no trial.

After the lynching proceeded, the crowd continued to torture his hanging body by repeatedly shooting at it.

The de-segregation of Oxford schools occurred in 1887, when the Butler County Circuit Court decided that the Union (South) School for white children must admit black students who attended the North School, also known as “the School for Negroes,” according to local histories.

Even with illegal segregation laws, white and black children were still separated in schools, bathrooms, clubs, and even on the playground.

When Improvements were Made

Despite Oxford’s racist past, the town contributed to the improvement of civil rights, both locally and nationally.

Miami University’s Western Campus, which was previously the Western College for Women, served as the training grounds for Freedom Summer in 1964.

Students and volunteers were trained to encourage voter registration in Mississippi, where less than seven percent of the eligible African-American population was registered to vote.

According to a Southern Poverty Law Center report, the number of hate groups in America today reached 1,020, an all-time high.

Despite this alarming statistic, Byrd-Gibson believes that relations between African-Americans and the white community in the Oxford area have improved.

“We work very well together,” she said, noting positive energy and support from the community, but she has concerns about the job opportunities available to African-Americans.

“We don’t have the opportunities that we could get,” she said.

While segregation is no longer legal, its effects are still present. Cities across the country are segregated into predominantly white and non-white communities.

This racial divide in communities echos the Jim Crow era practice of “redlining,” a technique used to classify living areas. “Hazardous” neighborhoods were marked on a map in red ink, and real estate was discounted for minority groups, which resulted in larger concentrations of minority populations in these areas. ‍ 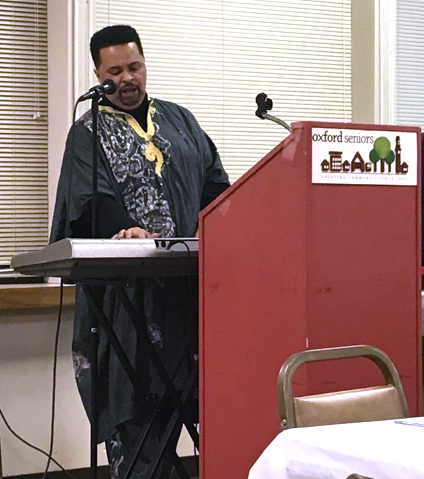 John Burg performing on his keyboard at Oxford Seniors on Feb. 23. Photo by Caroline Roethlisberger

The Oxford Seniors’ Soul Celebration event was started eleven years ago to diminish community segregation and increase diversity at the center.

The event “. . .celebrates history and recognizes the amazing contributions that the African-American community has provided to our town,” said Sabrina Jewell, board member and outreach coordinator.

“Oxford Seniors is a melting pot of this community,” Jewell said.

Despite these improvements, Steve Schnabl, Executive Director at Oxford Seniors, sees a disconnect in representation.

“The Seniors Center doesn’t have a fair representation of the African-American community that we would like,” Schnabl said.

According to the U.S. Census Bureau, Oxford’s African-American minority only makes up about four percent of the population.

The goal of the Soul Celebration is to change the under-representation of minorities and educate the community with “rich history from storytelling,” said Jewell.

With a Kroger-sponsored dinner, over 100 guests celebrated Black History Month. Music was provided by John Burg, a Middletown-based musician who gave a soulful performance on his keyboard, and Byrd-Gibson with her husband, Rodney Gibson, performing a mix of songs.

The pair also acted in a skit with student volunteers, portraying Rosa Parks and her arrest for protesting bus segregation.

Byrd-Gibson’s personal goals for the event were to increase minority participation and “Pull people in,” Gibson said.

While students helped serve the guests and set up the event, the audience consisted mostly of Oxford Seniors community members, ages 50 and older.

For future events, “I would love to see Miami students involved with the celebration,” said Byrd-Gibson.