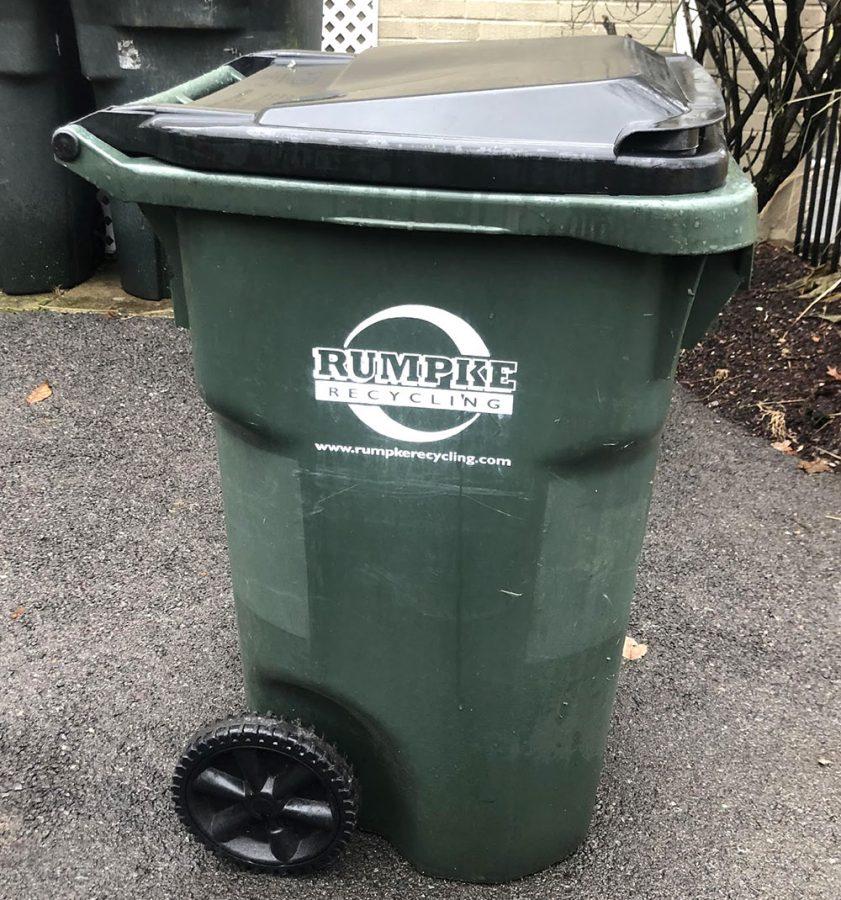 Within the next few weeks, Oxford residents will be able to get a large green rolling bins like this one to put their recyclables out on the curb. Photo by Alec Vianello

Big green Rumpke recycling carts will arrive in Oxford with the beginning of spring semester in a citywide effort to reduce the waste stream and encourage people to separate what’s recyclable from the true trash.

Rumpke of Ohio Inc. entered a contract with the city of Oxford to allow residents the choice of upgrading from the old 18-gallon red bins to the larger green 65-gallon recycling carts at no additional cost. Previously, it cost $1 per month to upgrade, according to David Treleaven, who handles the trash and recycling contract for Oxford.

“In our conversations with Rumpke, they said from their experience the best way to increase recycling within residential services is to provide bigger containers,” Treleaven said.

Molly Yeager, corporate communications manager for Rumpke, said the bigger carts are a big convenience for people because they allow residents to put more materials in and not have to break as many materials down.

“The 18-gallon bins are allowing people to recycle, but with people realizing the benefits of recycling more there is a need for the larger 65-gallon bin,” said Yeager.

The program had planned to start Jan. 1, but was delayed until the start of the semester to ensure that there were enough of the new carts on hand and so that the program could be publicized to widest possible audience, said Jessica Greene, assistant city manager. The semester begins Monday, Jan. 27, and the city will send out fliers to all residences and the new carts will start showing up soon after that, Greene said.

The demand for bigger and lidded carts is due to the trash and recyclable materials that are frequently scattered on the streets and in the alleys of Oxford.

“The lids help contain the trash so it doesn’t become litter,” said Treleaven.

Oxford has big business, but not a lot of room, mainly on High Street. With little space, a large amount of businesses share waste containers.

“If you go down the alley it’s basically just wall to wall of trash cans and if people aren’t getting things well into a container as they are rolling them around, things fall out,” said Treleaven.

According to Treleaven, some more fortunate businesses have already created a solution by using compactors through deals with Rumpke, but others don’t have the money.

“Businesses are now diverting their cardboard out of the compactor and that seems to have really alleviated the volume issues they were having,” said Treleaven.

A large area where the city sees these issues intensify is with off-campus housing for students who attend Miami University. Treleaven said that most student housing should be equipped with some sort of trash or recycling bins or carts, which stay with the house after the students move out, but sometimes students report that they go missing.

The city’s new contract with Rumpke states that all residential accounts in the greater mile square will be provided lidded and wheeled recycling carts. That area stretches roughly from Sycamore Street to Chestnut Street, and from Tallawanda Road and S. Campus Avenue to Locust Street.

It is unclear whether residents in this area will have to pick up their new carts or if Rumpke will be dropping them off. Outside of this area, it is going to be harder to get one of these new carts.

The City of Oxford has roughly 3,300 residential accounts and 1,024 of them already utilize green carts, according to Treleaven. The red bins still will be available to households that do not switch to the larger, wheeled carts.

“I think the carts are the most effective way to capture recycling,” said Flaig. “They keep the community clean because they have a lid and they collect about three times as much recycling as those smaller red bins recycling bins.”

Oxford is currently the top recycling community in Butler County, “but I think with the role of the carts, they’re going to increase their margin with how far ahead they are,” said Flaig.

Besides the carts being a huge way to help save the environment, they are also safer than the old bins. The fact that they have wheels makes it easier for all people to move them.

“I think they are even safer for people to move from their garage down to the curb,”  said Flaig. “So, I think it’s a good development and I’m glad that Oxford is doing that and overall I think that they would have a lot more recycling that they will capture.”