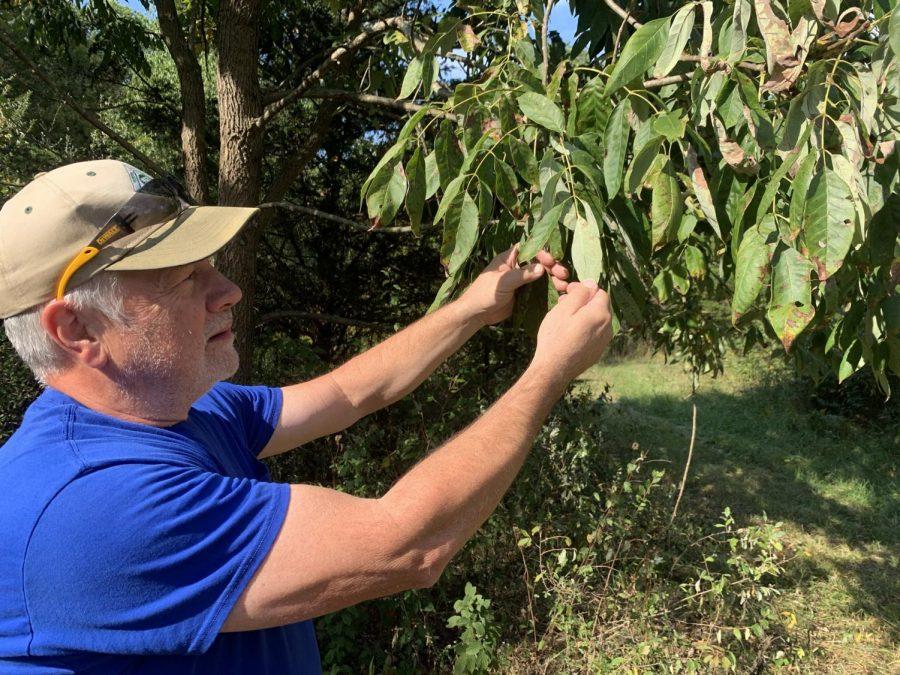 John Kinne examines the trees on his Oxford Township property searching for the emerald ash borers. Photo by Ryan McSheffrey

Oxford Township resident John Kinne is looking to fight fire with fire when it comes to an invasive species—the emerald ash borer (EAB)—which has devastated ash trees across the country.

The hopeful solution hails from China, the same country as the ash borer: Chinese wasps — a term used for four species of stinger-less wasps about the size of gnats.

In August, Alistair Reynolds of the Ohio Division of Forestry—part of the Ohio Department of Natural Resources—assisted Kinne with the distribution of two species of Chinese wasps on his property. The hope is the wasps will prey on the ash borers, keeping them in check.

“They (the government) studied these things for years to see if they’d hurt something else,” Kinne said. “After years of study, the U.S. Department of Agriculture decided that it would be OK to distribute some of these Chinese wasps to see if they’d be effective in controlling the emerald ash borers like they are in China.”

According to Reynolds, there are four options for fighting invasive species.

“You’ve got insecticides, host removal, and viruses,” Reynolds said. “And another method is biocontrol: you find an insect, parasite, or fungus that kills the insect you’re having a problem with.” 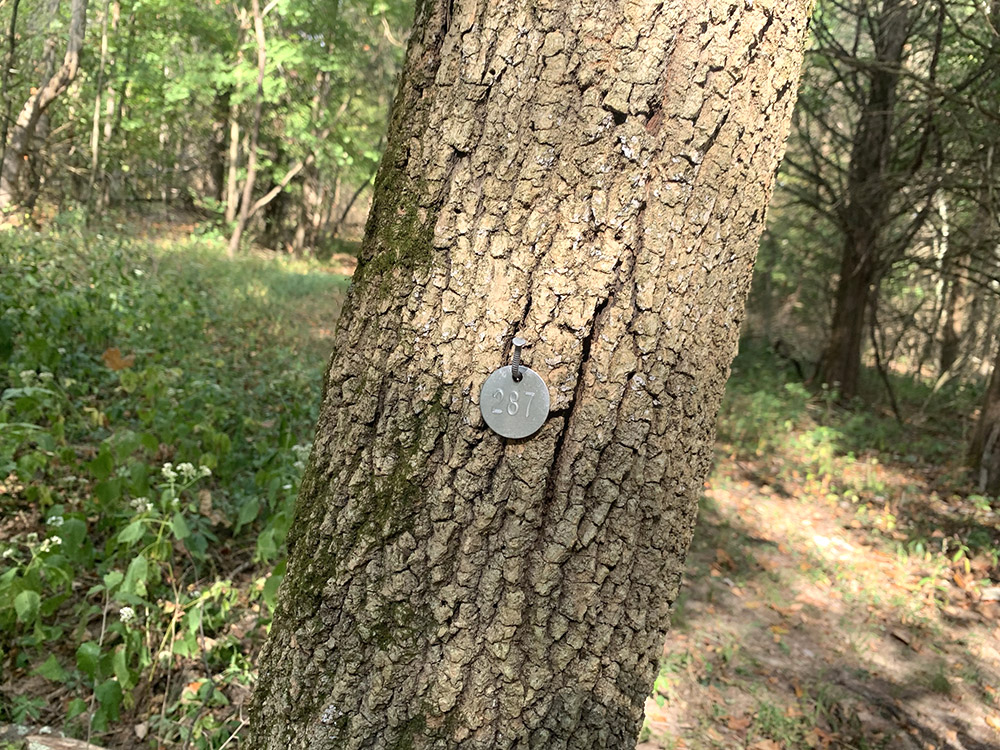 An infested ash tree on John Kinne’s farm is tagged to be treated by Chinese wasps. Photo by Ryan McSheffrey

Insecticide is a less cost-efficient long-term solution, so Chinese wasps were chosen. The imports face an uphill battle to taper the EAB population.

The ash tree made up 30% of Ohio’s tree population only 20 years ago, Kinne said. But in 2003, the EAB—a species that is deadly to North American ash trees because it digs tunnels under the bark—was discovered in Michigan. It is thought the invader was brought over unwittingly in shipping containers from China.

In the years since, ash trees have taken a beating in Michigan, Pennsylvania, Ohio and parts of Appalachia. According to the U.S. Department of Agriculture, the EABs  now infest trees throughout the eastern United States.

“We got hammered, we got absolutely hammered,” Reynolds said. “I’ve heard it’s (killed) like 99.7 percent of our ash.” According to a 2018 report by the U.S. Forestry Service, the EAB  poses a threat to 100% of the ash trees it infests. 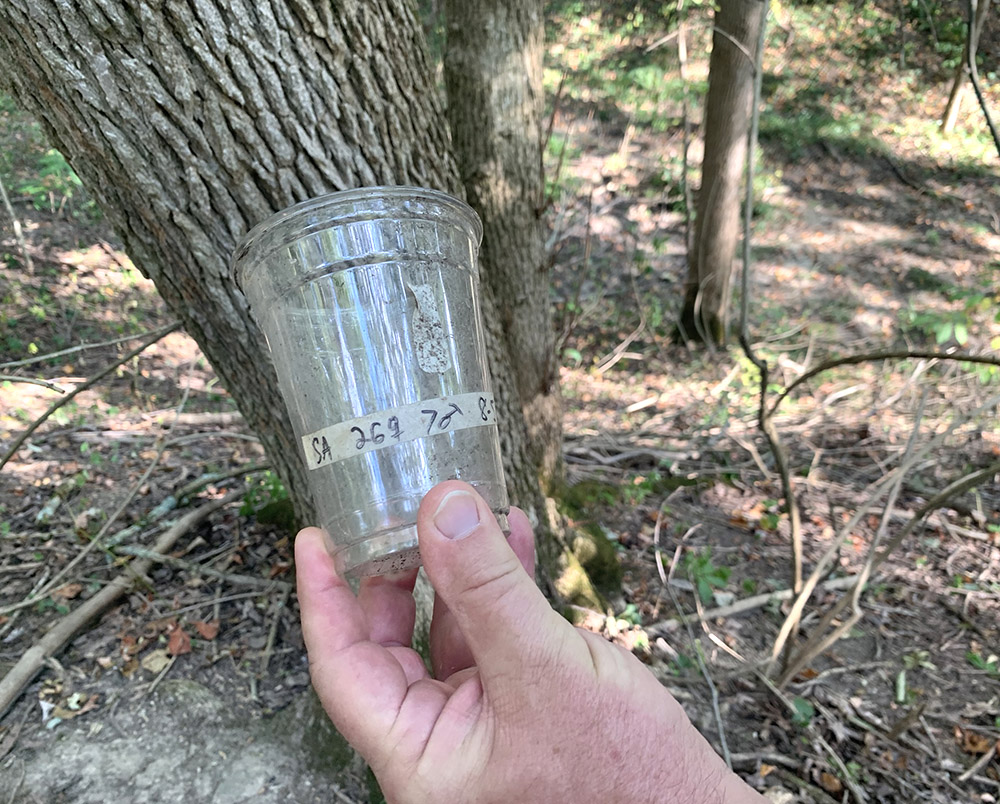 A cup with dozens of the gnat-sized Chinese wasps is opened to release the wasps on a tree infested with emerald ash borers. Photo by Ryan McSheffrey

Almost every tree has a type of borer that makes its home inside, but most trees have built up a genetic resistance to the species that does so. In China, Manchurian ashes are relatively resistant because they co-evolved with the emerald ash borers. North American ones, however, did not.

And when the borer cuts the bark off continuously around any part of the tree, it proves deadly.

“The sapwood takes water to the rest of the tree, most of the water goes to the leaves, and the leaves photosynthesize, where they load it with water, and . . . send the nutrient-rich fluid back to the bark and the parts that need energy.”

When people were searching for answers to prevent that kind of destruction, they found several species of Chinese wasp, which prey on the EAB, Reynolds said.

Federal agencies extensively studied the Chinese wasps, and four varieties were eventually approved to not have any significant effect on other American ecosystems, except for preying on EABs, Reynolds said. 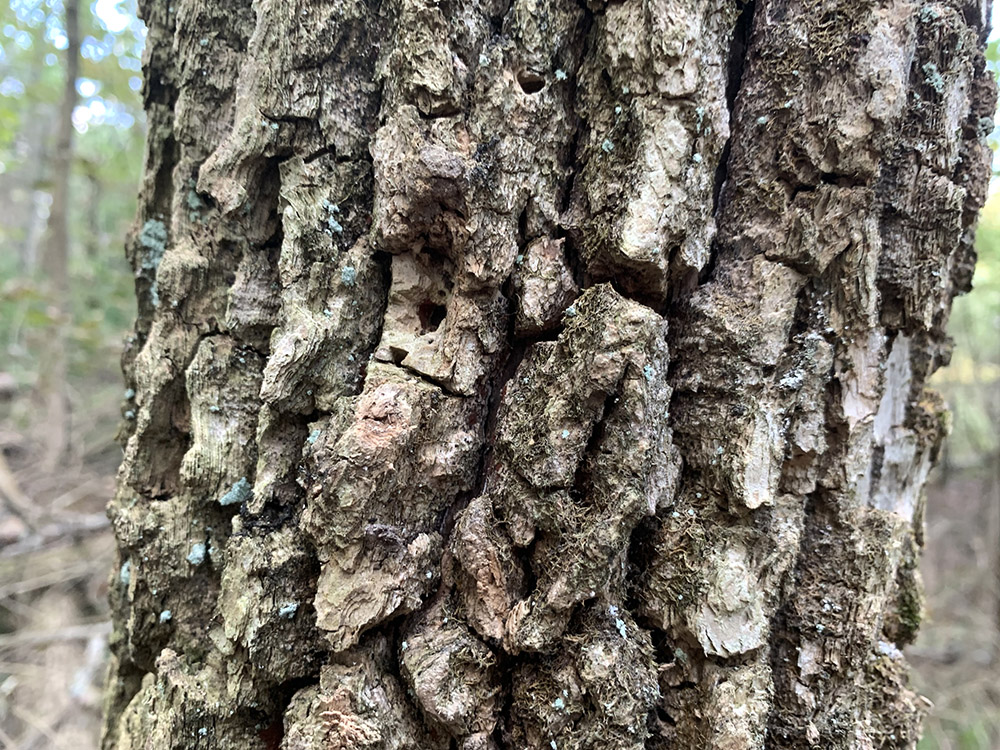 The emerald ash borer bores a tiny hole like this one into a tree and then tunnels under the bark, killing the tree. Photo by Ryan McSheffrey

“The Oobius wasps lays its eggs inside the emerald ash borers’ eggs, and the little wasp has something to eat — it eats the egg for a long time,” Kinne said.

Kinne said he had been waiting for testing to finish up for a while when he first met Reynolds a year ago at the annual Paul Bunyan Show, east of Columbus in Lore City. The two had been in contact for some time.

Reynolds eventually came to survey Kinne’s 53-acre property, on which he operates a tree farm in his woods. The woods were deemed acceptable by the Animal and Plant Health Inspection Service (APHIS)—a subdivision of the U.S. Department of Agriculture (USDA).

“They ask that there be about 25% ash in the forest, so plenty of host material and plenty for the biocontrol to feed off,” Reynolds said.

Kinne’s is one of the rare properties in Ohio that still measures up to that standard of living ash trees. Reynolds, who operates throughout Ohio, has only done this treatment on one other property, he said.

“He got adults,” Reynolds said. “When you open the cup, they just kind of fly everywhere.”

“When we distributed these things, they were like dust particles,” Kinne said. “I didn’t breathe too hard because I didn’t want to inhale them all.”

The trees that were targeted were spread across five acres. The pair said the plan is to distribute the Chinese wasps for two more years and then “trap” to determine whether the wasps have gained a foothold.

“When you set these traps out, you catch all kinds of bugs, and then you bag that up and send it to a lab, and they sort through all the insects and identify if your biocontrol is in there,” Reynolds said.

But even if the current generation of mature ash trees is killed, there is hope the Chinese wasps will aid in the survival of an “orphan generation” of ash trees.

“The ashes put seeds in the ground, and they’re viable for three years,” Kinne said.

“So even if this generation dies off, the next generation might survive.”