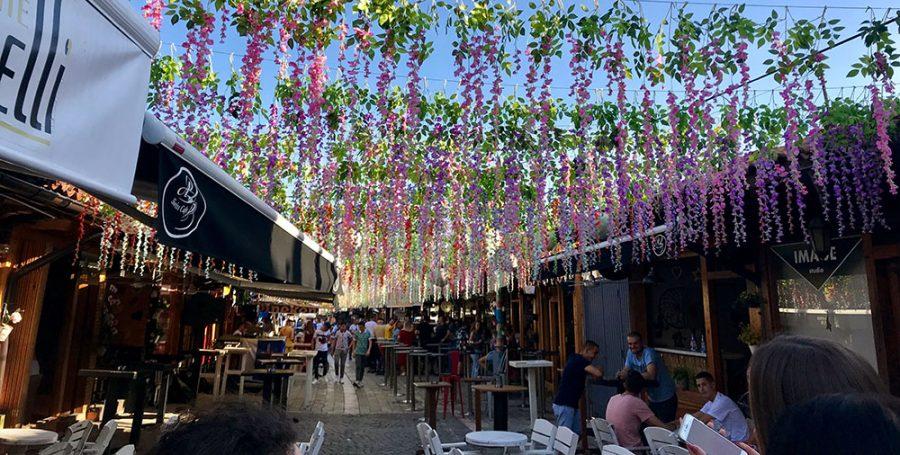 The streets were strung with flowers during Carshia Fest, a popular music festival in Kosovo. Photo by Darby Grant.

In Prishtina, the capital of Kosovo, nights also are long and lively. The bars and streets are filled with University of Prishtina students. And despite the predominantly Muslim culture, almost all can be seen with drinks in hand. The difference is that the drinks stay in their hands, instead of being thrown back and set down in a matter of minutes (or tossed, in the case of Oxford’s Brick Street or New Bar).

Alleys sprouting off Mother Teresa Boulevard in the city boast the same number (if not more) of bars as Oxford’s High Street. Women put as much effort into their appearance on any given night as Oxford girls at their sorority formal.

Chanel, Givenchy and Louis Vuitton are just a short list of the designer handbags women are seen sporting. Their clothes are sleek, and high fashion (an evident Kardashian flair). Their hair is styled and their nails are perfectly manicured.

Appearances are very important, and Kosovar society places a heavy emphasis on it; even more than the U.S. does.

Erblina Ramadani, Diana Shkoza and Mirjeta Aliu are three women in their 20s from Prishtina. Attending the Carshia Fest musical festival with them revealed their thoughts on Kosovo drinking culture and their perception of American drinking culture.

The festival took place in Gjakova, Kosovo, in the old bazaar known as Carshia. It was a little street encompassed by two long rows of shops and restaurants. Flowers were strung between the buildings and bars were open, facing the tables that were filled with people and music being produced by bands and DJs.

Much like university students in Oxford, those at the Carshia Fest wanted to have fun, spend time with their friends, take some Instagram photos and enjoy pounding, contagious music. The differences come in regards to how they have fun and how it is acceptable to have fun.

“Usually I go out once a week, with heavy drinking until one or two a.m…. most … youth drink and the nightlife is very active,” Ramadani said. From this perspective, Prishtina and Oxford drinking cultures seem very similar.

“It’s more common for men to go out, probably 60/40 percent men to women,” Shkoza said. While Muslims in Kosovo are secular, and it isn’t unusual to see couples and mixed groups of men and women, there often is a larger proportion of males to females.

Shkoza commented on the influence of Islam on the drinking culture: “I think it does have an impact, I have friends that don’t drink because of religion… thinking about it, years ago they used to drink less, it’s changing because the youth aren’t as into religion. For me, I don’t drink so often for personal reasons.” A strict interpretation of Islam prohibits the consumption of alcohol.

While Aliu did not speak much English, Ramadani offered that Aliu’s religious upbringing has influenced her perspective and participation in drinking. At the festival,  Aliu had a beer, but otherwise stuck to nonalcoholic beverages. She did dance, and enjoyed the live music with her friends.

“Young people generally are not so religious; it really does depend though” Ramadani said. Aliu agreed with Ramadani’s statement that, “the holy month of Ramadan (most of May and part of June) is very important here, even though we drink 11 other months of the year, we try not to drink that month as it is prohibited in the holy book.”

It seems that many of the differences between Oxford and Prishtina can be attributed to religion. In Oxford, it is uncommon to meet someone refraining from alcohol for

religious reasons, usually it is for personal or other reasons. In Prishtina, the correlation between religion and drinking is clear.

Further, the drinking culture at bars is visibly different. In Oxford the bars are often plagued with students who have had too many drinks and get belligerent. In Prishtina, the students seemed to take their drinks at a much slower rate.

At the Carshia Fest, youth were seen dancing in the streets until late hours, drinking, but under control.

The type of alcohol consumed in the U.S. and in Kosovo varies drastically. Prishtina bars serve mixed drinks and beers like any typical bar in Oxford. However, wine and basic drinks such as gin and tonic seem to be the favorites of students enjoying a night out. If you were to tell any given Pristina student about what goes into a Brick “trash can” (a mix of vodka, gin, rum, triple sec, blue curacao, Sprite and a can of Red Bull), their jaws would drop.

In describing a typical night out in Pristina, Ramadani said, “We usually start out and finish with wine and beer, sometimes gin and tonic but for the most part, wine and beer.” Aliu and Shkoza agreed with this.

Deeper into the interview, Ramadani revealed she studied abroad in Michigan for a year. She said American students drink more during nights out and they go out more nights a week than the students in Prishtina. She also emphasized the prevalence of underage drinking problems in the U.S. Drinking laws are much more relaxed in Kosovo, she said.

Ramadani said some of the reasons American students drink more at college is because underage students can’t get alcohol as easily and when they do, they take advantage of it and sometimes drink to excess.

Darby Grant participated in a Miami Study Abroad program in Kosovo this past summer. The students study in Kosovo, a new democracy in the Balkan region of Europe.