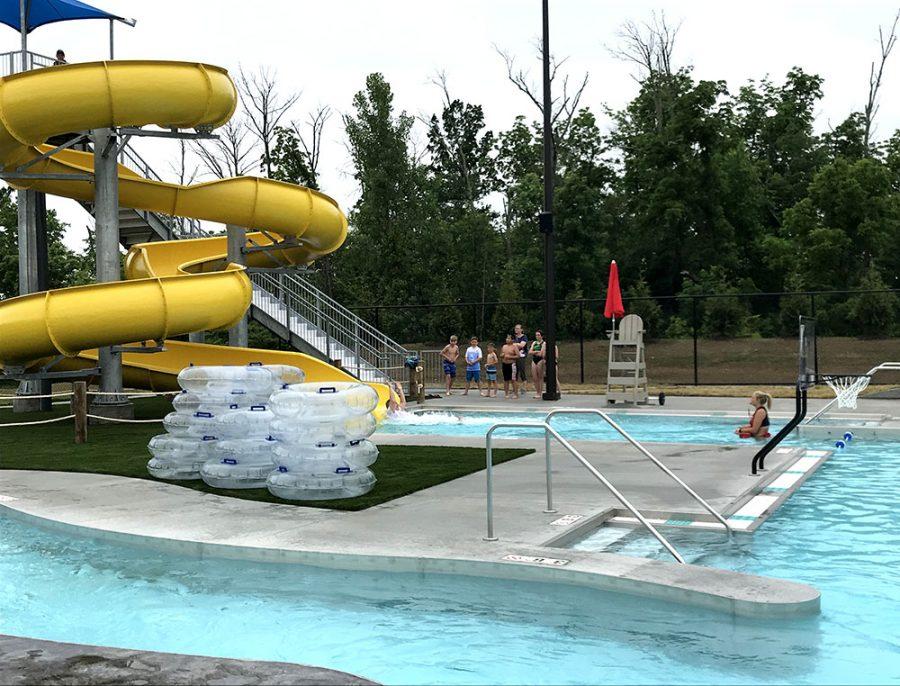 Colorful water slides are expected to be popular features at the pool. Photo by Chris Vinel

Shortly after 11:30 a.m. last Saturday, Oxford Mayor, Kate Rousmaniere swung open the iron gates of the new Oxford Aquatic Center, letting the public into the facility for the first time and signaling the end of a 14-year project.

The process to replace the old pool, located at 6025 Fairfield Road, started in 2005, when city council first voted on the project. Construction began last August and was completed earlier this month, after a three-week delay from the originally-scheduled grand opening on May 25.

Braving intermittent rain showers and temperatures struggled to hit 70 degrees, roughly 100 Oxford residents came to the Aquatic Center’s grand opening. The ceremony was free and open to all comers, but only paid members of the complex could stay after the pool opened to swimmers at 12:30 p.m.

Casey Wooddell, Oxford’s director of parks and recreation, said 145 people checked in with passes. Although the air was 70 degrees, the pool was turned up to a comfortable 80.

After Rousmaniere opened the gates, attendees were given 30 minutes to check out the facility and find a spot for the day. The Aquatic Center drew high praise.

“I’m so pleased,” seven-year Oxford resident Karen Bachman said. “It’s so colorful with the beautiful umbrellas and the different-colored slides, and it’s just amazing. This city is so lucky to have this. The dream became a reality, and I think people will come from all around to see this facility and have fun here.”

“It was just so much fun, every day, to come to the park and see what was happening here,” Bachman said.

Bachman already knew what her favorite part of the new Aquatic Center would be.

“I can’t wait to bring my granddaughters,” Bachman said. “I have been sending them pictures. They live in Columbus, so we’ll bring them out here (when they’re in town). They’re going to love it.” 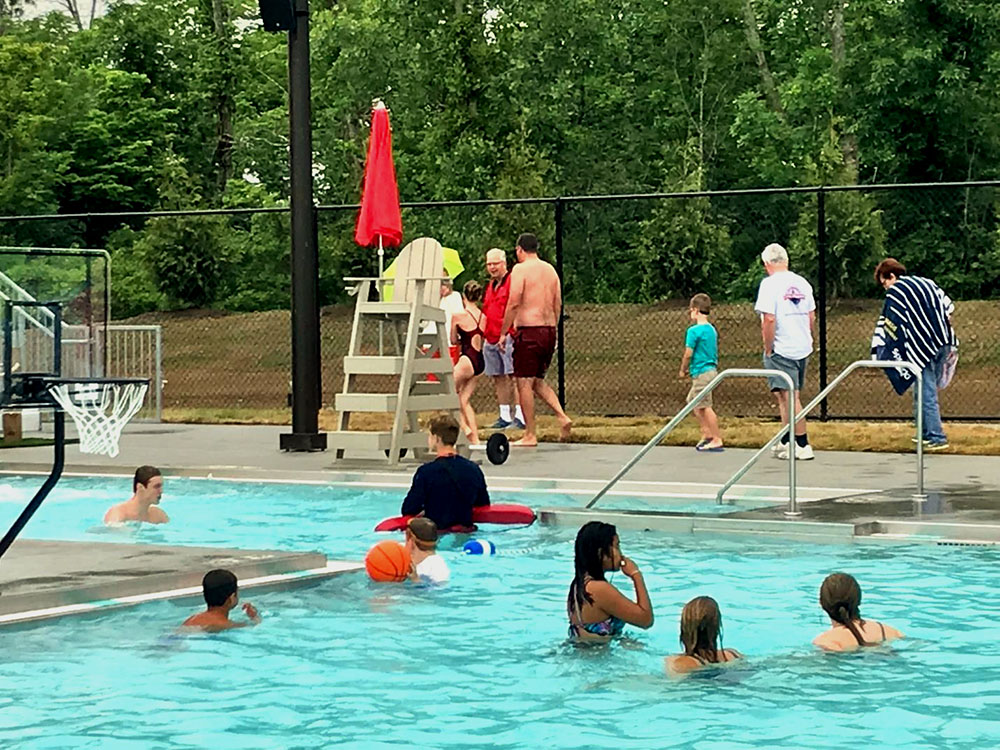 It was a rainy, cloudy opening day, but the weather didn’t stop people from enjoying Oxford’s new pool. Photo by Chris Vinel

Steve Lippmann and his family were members of the old pool and also bought passes to the new one. He said they plan to spend a lot of time there this summer.

“My daughter is on the Oxford Swimming and Diving Team, but I’m sure we’ll be here all the time anyways,” Lippmann, an Oxford resident of 12 years, said. “It’s just a really nice place.”

Lippman joked the Aquatic Center will be a nice place to work on his tan.

Once the ceremony started up again at noon, Rousmaniere performed a cannonball, off the diving board, into the pool. She’s been opening the old pool with a jump for the last few years. 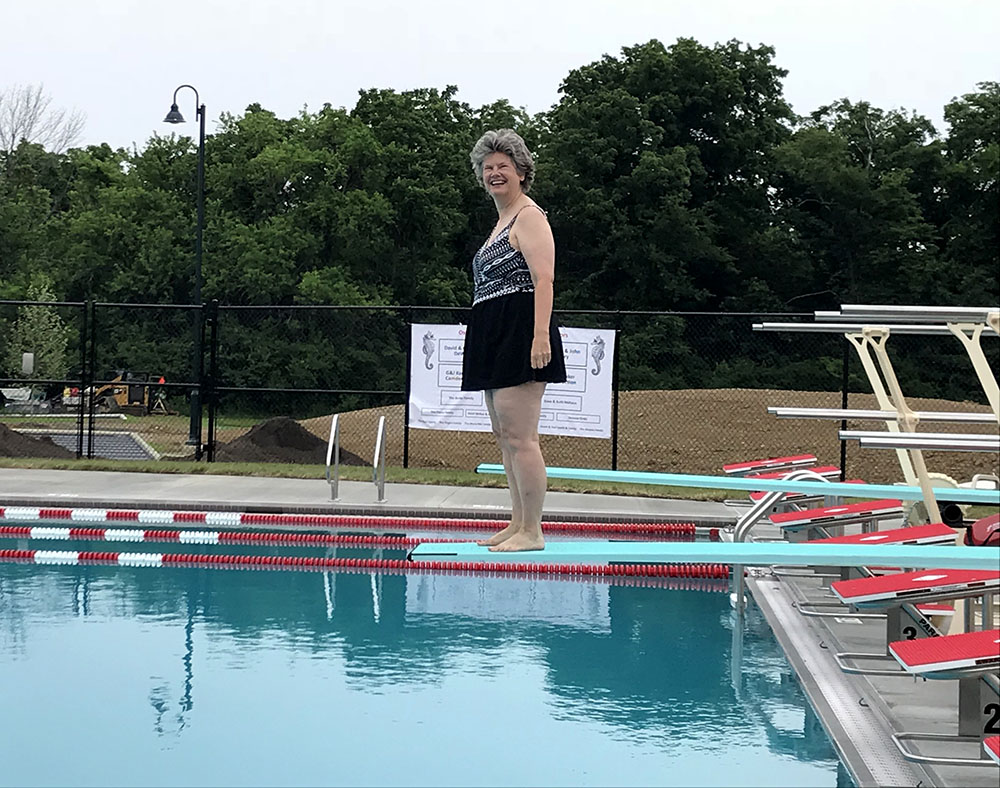 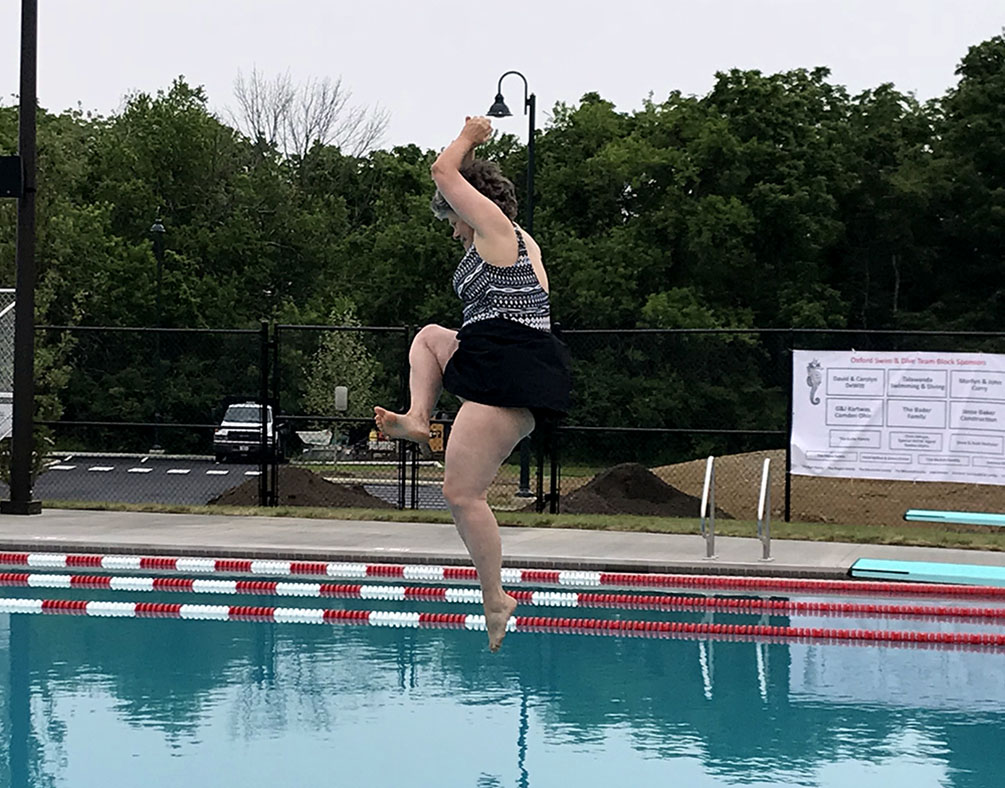 Oxford Mayor Kate Rousmaniere carries on the tradition she established at the old pool — the inaugural cannonball from the diving board. Photos by Chris Vinel

“Now, it’s become a tradition,” Rousmaniere said. “The next mayor is going to curse me, but it’s pretty fun. The kids really like it. It’s probably the most important thing I do as mayor, because all year round, kids will say, ‘You’re the lady who did the cannonball!’”

Rousmaniere, like Lippmann, thinks the new facility will be great for the community.

“To have it here, to have the soccer fields nearby, the playgrounds, the whole park out here, it’s really building up this park,” Rousmaniere said. “It’s making this park be, like, the center of community activities.”

The festivities ended and the pool season began at 12:30 p.m., after the completion of a speech by Wooddell—during which he thanked many of the people involved in the project—and a series of “firsts.”

Wooddell talked about he and many of co-workers spending long days and late nights at the pool during the week leading up to the grand opening.

“It was a stressful week, but today’s not a stressful day,” Wooddell said. “Today is the best part of the week.”