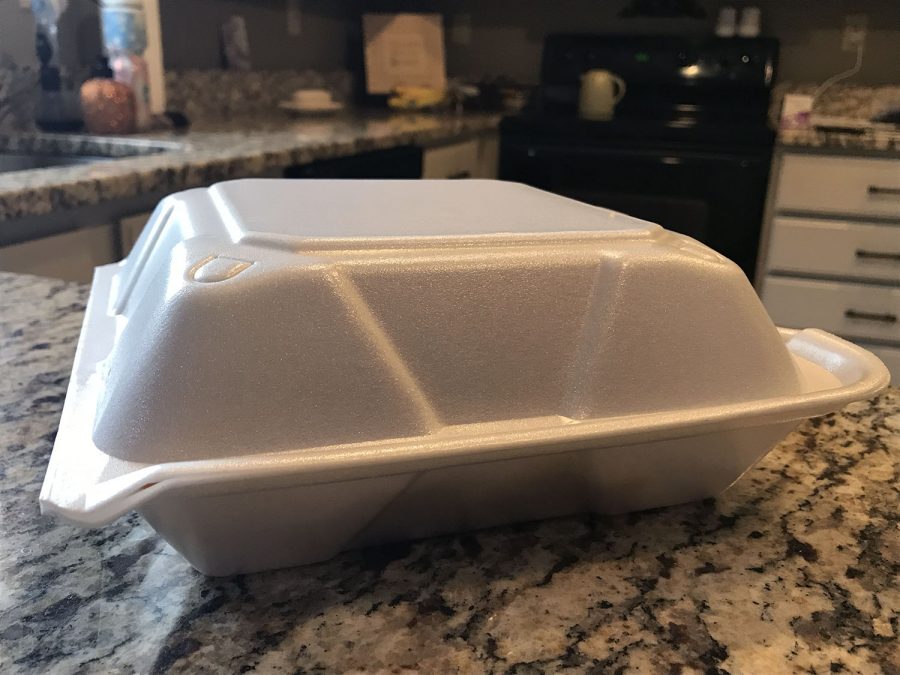 Oxford has adopted a program to phase out the use of polystyrene carryout containers such as this one over the next two years. Oxford Observer file photo

Oxford City Council voted this week to phase out the use of polystyrene carryout containers over the next two years in an effort to reduce the single-use plastic from the city’s waste stream.

The two-year timeline, which begins immediately, is meant to give time to local businesses to use up existing stocks of the containers and to find suitable substitutes to use instead.

The two years will also help in building more support for the cause in the community. “We still have two years if we need to do some more community engagement,” Mayor Mike Smith said at Tuesday’s meeting.

Polystyrene can be expanded into the foam products often referred to by the brand name Styrofoam. It has a wide variety of uses due to its insulating and cushioning effects, which led it to be popular in the food industry. Although beneficial for keeping food warm and safe, polystyrene takes up to 500 years to biodegrade, according to a 2016 study done at St. Louis University. By contrast,  cardboard only takes an average three months to decompose.

According to City Councilor Jason Bracken, “The material [polystyrene] is not good… it’s detrimental to our environment.” Polystyrene is resistant to a process called photolysis, which means it can’t be broken down by light.

Polystyrene can be expanded into the foam products often referred to by the brand name Styrofoam.

Polystyrene also breaks into small pieces, making it easily spreadable if littered and capable of being ingested by fish and animals. The toxins can cause disease and animals can choke or develop digestive blockages from the material. This material floats, polluting waterways and shorelines.

Other than the effects this material has on the environment, polystyrene poses a multitude of other dangers that need to be accounted for. Emissions from producing, and disposing of the material are toxic to humans.

The state of Maine has banned the use of polystyrene, as have a number of cities, including New York, San Francisco, Washington D.C. and Seattle.

Miami University has already stopped using polystyrene in food and beverage containers, as have several national food chains, including Burger King, McDonald’s and Starbucks. However, many independent businesses in Oxford still use the material on a daily basis.

Andrew Amarantos, owner of Skipper’s Pub and Top Deck on High Street, said he likes the polystyrene containers for their performance, “They hold the product very well,” he said. However, he also said that he was sure that he will be able to find an alternative that will do the job just as well.

Amarantos has worked on High Street for over 35 years and pointed out that the City of Oxford is constantly changing. He is intent on following the rules the city adopts, as he has in the past.

The polystyrene ban has been under consideration by council since early December. It has been widely publicized discussed at three council meetings and a meeting of the city’s environmental commission. A few members of the public have spoken in favor of the ban, and there has been some talk that the city should make sure there is a suitable alternative available before enacting a ban. City Manager Doug Elliott said he is unsure how such a ban will be enforced at the end of the two-year phase out period.

However, there has been little reaction against the ban. No members of the public spoke for or against it at Tuesday’s meeting.

At a retreat of city council and department heads from the city administration on Monday, it was decided that sustainability should continue to be Oxford’s number one strategic priority. “There are so many other issues, this is just the tip of the iceberg,” said Oxford City Councilor David Prytherch.