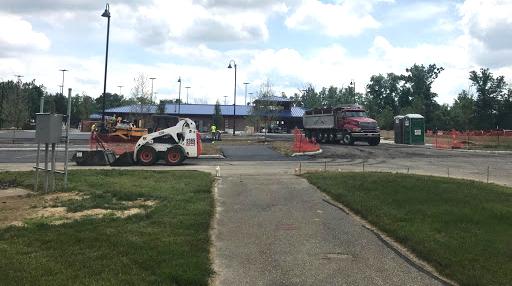 Landscaping and some finishing touches are all that’s left to be done at the new Oxford Aquatic Center, scheduled to open June 25, after a 21-day delay. Photo by Chris Vinel

The Oxford Parks and Recreation Department is hoping the old adage of “the best things are worth the wait” rings true next week, when the new Oxford Aquatic Center is scheduled to open.

Casey Wooddell, the city’s director of parks and recreation, said the facility is on track to open on Saturday, June 15, after a 21-day delay. On Thursday, one of the two pools housed by the complex was filled with water. The new center is located at Oxford Community Park, 6801 Fairfield Road.

“I don’t know if I have a word for it,” Wooddell said. “I would say just crazy excited, in general, and anxious all at the same time about it finally coming together and getting all the pieces of the puzzle put together, so we can make this happen, get this opened and give the people of the community their pool back. They’re ready for it.”

The pool was originally scheduled to open on May 25, but on May 17, the Parks and Recreation Department announced that date had been pushed back to June 15 due to a rainy construction season.

Wooddell said Thursday that the upcoming grand opening is planned to be an exciting one.

The ceremony will begin with Oxford Mayor Kate Rousmaniere performing a gate-opening at 11:30 a.m.

“I don’t want to do (a ribbon-cutting) because it’s kind of cliché,” Wooddell said. “We’ll do a gate-opening, with these really cool, giant iron gates.”

Then, there will be a 30-minute free period for people to enter the facility, pay their admissions and find a seat.

At noon, there will be a ceremony that includes a number of “firsts.”

“There will be a first time around the lazy river, first time down the slide, the first time jumping off the diving boards, and for each amenity of the facility, we’ll do a first with a different person – somebody local, whether that’s the mayor, city manager, the swim team – somebody will do each first,” said Wooddell.

Memberships to the new pool have been available for purchase since April 1. So far, more than 350 season passes have been sold.

Wooddell said, because of the loss of 21 pool days out of the 100-day season, the price of the passes has been prorated to account for the delay. Prices started at $195 for a family of four Oxford residents and have been knocked down to $154.05. For non-residents, the new rate sits at $169.85.

Membership fees for the new pool have increased from their rates at the old pool. At the old pool, it cost $135 per family of four. Wooddell said the new Aquatic Center’s rates were determined after a study of six other local aquatic centers.

“$195 is basically the middle line of those six, so we’re average cost-wise compared to those,” Wooddell said.

As workers dealt with landscaping and were putting the finishing touches on the new aquatic center, other crews were demolishing the old city pool, at 6025 Fairfield Road. That pool closed at the end of last summer, after 45 seasons. It was located on site owned by the Talawanda Recreation Inc., and leased by the city. As part of the city’s deal with TRI, the site has to be restored to grass now that the old pool is closed.

Bulldozers began filling in the old city pool this week. The site will be returned to grass as part of the TRI recreation complex at 6025 Fairfield Rd. Photo by Chris Vinel

The delay at the new pool also forced some adaptations for the facility’s employees and organizations like the Oxford Swimming and Diving Team.

Wooddell said all lifeguards for the new pool have been hired, and 95% of them have been through initial orientation. Next week, they will help set up the pool furniture and do other preparation for the grand opening.

“They weren’t working on May 25 as anticipated,” Wooddell said. “We did adjust some orientation dates and training dates. We were able to get some of them hours over at the (Oxford Country Club pool) because that’s where the swim team is practicing now.”

The country club, The Oxford Swimming and Diving Team started its practices on its scheduled date of May 28, albeit in a different location than members originally thought.

“I’m thankful (the country club) took us on as our backup,” Oxford Swimming and Diving Team President Julie Warholak said. “We are disappointed the pool didn’t open on time and that it was behind schedule. There are 176 kids signed up and their families that have been affected by it. We’ve had to adjust a little.”

Warholak said, however, there was nothing anyone could do about the construction delay, and she and the team remains excited about moving into the new facility. Wooddell said the team will begin practice at the new facility on June 17.

The Aquatic Center’s main pool will feature eight lanes – two more than the old pool had—and two diving boards. All of the diving blocks were donated to the swimming and diving team.

Luckily, the team’s meet schedule was not affected by the delay. Its season starts on June 13, but it doesn’t host its first home meet until June 20.

“That meet is scheduled to happen, and I, at this point, don’t see any reason why it wouldn’t,” Wooddell said.

Last season, the team won the Butler County Swim Championship, and Warholak said she’d love to open the new pool by successfully defending that crown. The Oxford Swimming and Diving Team will host the diving championships at the new facility on July 22.