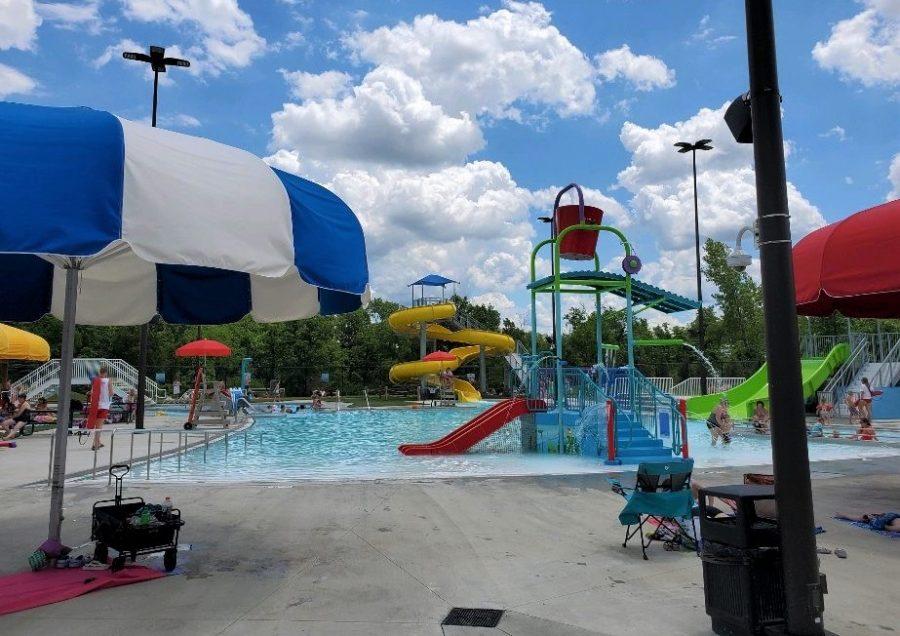 The Oxford Aquatic Center is open for swimmers, but in limited numbers. Photo by Blake Boyd

The Oxford Aquatic Center opened for the season last Saturday, June 20, welcoming patrons to cool off and have fun under the state of Ohio’s social distancing requirements.

The Aquatic Center is required by law to place social distancing guidelines and markers throughout the facilities. This means that designated areas to relax and lay out in the sun are spread throughout the green area surrounding the pool.

No lounge chairs of any kind will be provided, so patrons must bring their own if desired. There are also instructional videos scattered throughout the park reminding people of the new rules, sanitized life jackets for children and certain restrictive distancing measures in place at the snack stand.

The pool is open for two sessions each day: an early period, from noon to 3 p.m. and a late period, from 4-7 p.m. A maximum of 200 people are allowed into the facility at each session. The center is closed from 3-4 p.m. for cleaning.

On its opening day, the Aquatic Center hosted 126 people during its first time slot and then 150 people during its second session. On June 25, the pool reached the maximum occupancy limit of 200 people for the first time since opening, said Casey Wooddell, director of the city’s Parks & Recreation Department. Wooddell said he expects the center to hit the 200-person limit often during the summer.

It is hoped that the two daily sessions will provide enough time for people to swim while also reducing the crowd size to mitigate the possibility of spreading COVID-19. Separate admission fees are required for each time slot, Wooddell said.

Ryan Himes, the aquatic program supervisor, said there is not a huge difference in the atmosphere of the Aquatic Center with the restrictions. “The experience that families take part in when here has not changed. The main change is the smaller crowd. Everything is still open from last summer. We work really hard to make sure that everyone who enters knows the rules and that we are attentive to every detail,” Himes said.

The Oxford Aquatic Center has faced unfortunate circumstances in its first two summers of operation. The facility opened late during the summer of 2019 because of construction delays caused in part by bad weather, and this summer it has faced the pandemic restrictions that delayed its opening by almost a month and forced the rules described above. Wooddell said he is ready for a full season come summer 2021.

The pool itself is safe for swimmers, as there has been scant evidence to support the idea that coronavirus can be transmitted through the water, according to the Centers for Disease Control (CDC). Most pools contain chlorine or bromine, which are effective at killing bacteria and viruses.