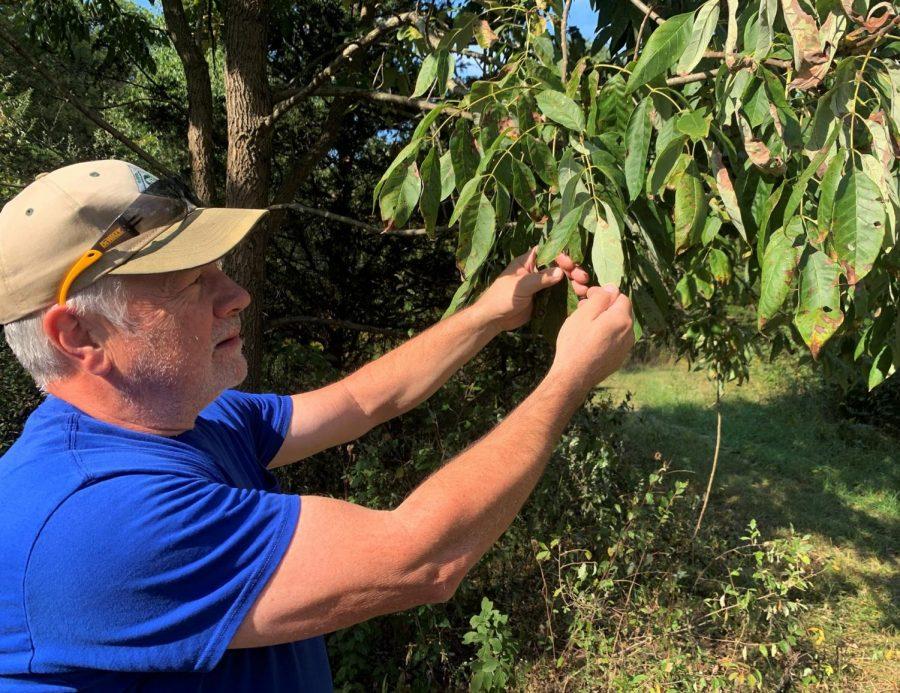 Oxford resident John Kinne continued the fight against the emerald ash borer last week with the fourth release of Asian wasps, or parasitoids, at his tree farm in Oxford Township.

Steve Sullivan, director of Miami University’s Hefner Museum, and graduate student Alisha Singleton, were on hand to assist with the release. Sullivan said they released around 1,000 wasps that day.

“Asian wasps” is a term used to refer to the four species of parasitoid wasps that are suitable for release in the United States against the emerald ash borer. While the term might conjure up images of black-and-yellow insects with pointed stingers on the ends of their bodies, Sullivan said “one of the neat things about these organisms….for the average person looking at them, they look like tiny little sugar ants with wings.”

The emerald ash borer is an invasive insect native to northeast Asia, and its presence was first reported in the United States in Michigan in 2002. Emerald ash borers lay their eggs on the bark of ash tree trunks. Once the eggs hatch, the larvae burrow into the trunk itself and begin to feed on the inside tissue. If they eat all the way around the diameter of the trunk, the tree can die from lack of nutrients — this is known as “girdling” the tree. To date, the emerald ash borer has spread to 35 states and Washington, DC.

Kinne’s farm features a diverse collection of tree species across 53 acres — including three kinds of ash: green, white and blue. “These wasps are wonderful,”  Kinne said. Rather than being a place to raise young trees, Kinne said, the goal of his farm is to take care of the woods to have healthy lumber and a place for wildlife. “It’s a place that’s enjoyable because it’s a great part of Ohio ecology,” Kinne said, referring to the farm.

The program distributing the wasps is called the Emerald Ash Borer Biological Control Program, and is part of the USDA’s APHIS, or Animal and Plant Health Inspection Service. To date, wasps have been released in 26 states so far, with the first being Michigan in 2007. Two conditions must be met for a site to be considered for parasitoid release: the site must have a considerable population of emerald ash borers, and a large enough population of healthy, non-infested ash trees. Kinne’s farm is the 13th such site in the state of Ohio.

Singleton is a graduate student with Project Dragonfly, a Miami initiative, and got involved when she received an email from her research advisor saying Kinne was looking for students to help with the release. She assisted Kinne last year with the collection of data regarding the presence of the emerald ash borer in the trees. “I plan to continue to be a part of not only the wasp release, but also of future surveys and data collection events on the property,” Singleton said.

Singleton said she “absolutely” thinks more students should care about events such as the wasp release, and said “programs like these give you a chance to be an active participant towards environmental solutions right here at home.”

The wasps are bred and raised at the Emerald Ash Borer Biocontrol Rearing Facility in Brighton, Michigan. From there, they are shipped to program participants in boxes filled with plastic cups. Kinne has done four releases so far, with the first occurring last November, and said he plans to release as many wasps as the facility is able to send him.

Sullivan said the date of release hinges on two factors: if there are sufficient numbers of wasps available at the Brighton facility, and if the environmental conditions are sufficient for the survival of the wasps. The next step after release is to collect data to determine if the wasps have been able to survive and reproduce, but that won’t happen for a few years, Sullivan said.

Sullivan wants the public to know that the four species of wasps chosen are not a danger to the ecosystem or human population; the emerald ash borer is the only species they prey upon, they cannot sting people or animals, and they aren’t poisonous to any other animal that might eat them. “You can compare them to a queen bee,” he said, another insect that only lays eggs and is neither venomous or poisonous.

While the presence of the wasps won’t be able to be studied for a few years, and their effects won’t be known for a few years after that, it seems like there might finally be hope for Ohio’s and America’s ash trees.