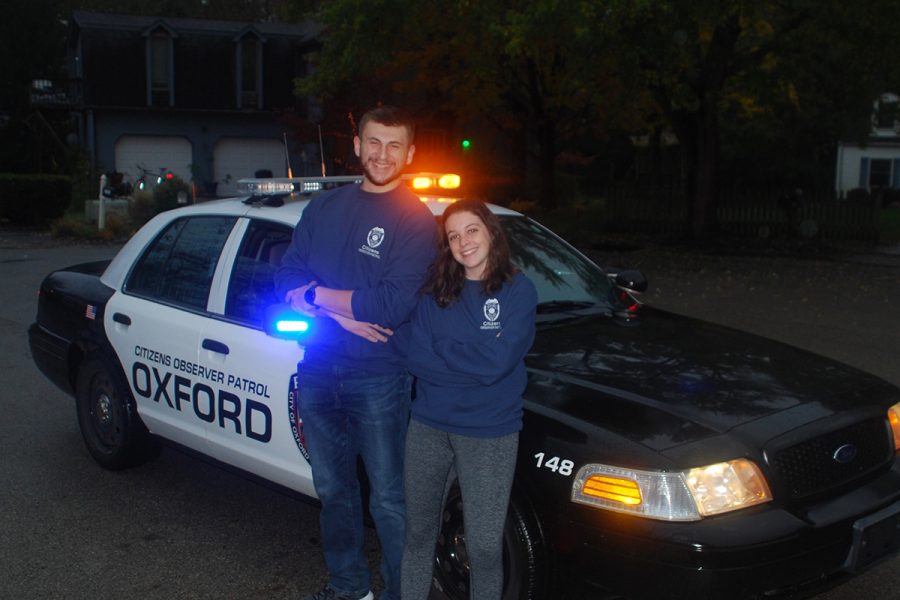 The Oxford Police have a force that supplements their efforts: the Citizens Observer Patrol (COP).

COP volunteers don’t carry guns or badges. If they come across a non-criminal situation needing a police response, they’re supposed to radio it in and help as needed.

“In the last couple months one of our [COP volunteers] was out patrolling in the vehicle and came upon a significant crash at McGuffey Avenue and Chestnut Street, and he was the first one to report the crash,” Oxford Police Chief John Jones said.

“He radioed it in on the police radio, which helped get the police started quicker than the time it goes through the 911 system.”

The COP volunteer then blocked off the intersection with his car, and helped to direct traffic.

The COP car is an older Ford Crown Victoria that looks an awful lot like a police cruiser, except that, upon closer inspection, it reads “Citizens Observer Patrol Oxford” on the side. It’s not technically a police cruiser, but the look can be deceiving, Jones said.

“If somebody’s up there and up to no good, if they see that car coming down the street, they see that police car, they might not know the difference between that and a police officer,” Jones said.

“The main focus for the patrol is to be observed,” said John Buchholz, Oxford Police’s community outreach specialist, and a retired detective sergeant, who runs the COP program.

“Most of the time, they’ll run across a lot of other things except a crime,” Buchholz said.

A Force of Students and Townspeople

COP is made up of seven Miami students who intern as part of their criminology minor, as well as a group of 15 community residents, among them Miami employees and retirees, according to Buchholz. Sometimes, interns will even stay on as volunteers after completing the required 160 hours that go toward their minor.

The interns from Miami do most of the patrolling in the COP car, he said, while the other volunteers mostly supplement police efforts at parades and events.

“If we didn’t have them, we’d have a hard time pulling [big events] off, because they help with traffic control and parking,” Jones said.

COP also serves a number of other purposes. Volunteers conduct traffic speed studies, which involves sitting off a road with a radar gun and alerting the police if drivers are frequently exceeding the speed limit over a period of time.

Volunteers update a database that lists the addresses of Oxford’s many “named” houses, in case the police or sheriff’s department receive an emergency call where the caller only knows the house name.

Additionally, volunteers check on the condition of street lights around Oxford and report ones that need to be repaired or replaced.

Most of the volunteers’ patrolling is done Monday through Friday, Buchholz said.

“We started it back in the late ’90s. That’s when police in the United States were moving towards community-based policing,” Buchholz said.

Buchholz has handled the program since his retirement from the force in 2010. But his retirement includes training COP hopefuls, as well as heading up the Citizens Police Academy (CPA).

Buchholz, who is now the police community outreach specialist, saw his role quickly evolve into one in which he was overseeing COP, CPA and the Community Picnic.

“It’s a people job,” he said. “A lot of times, people just want a call back that someone was working on their issue.”Citizens and students interested in joining COP are welcome to fill out an application and email it to Buchholz at [email protected]