A professor’s perspective: Time to march 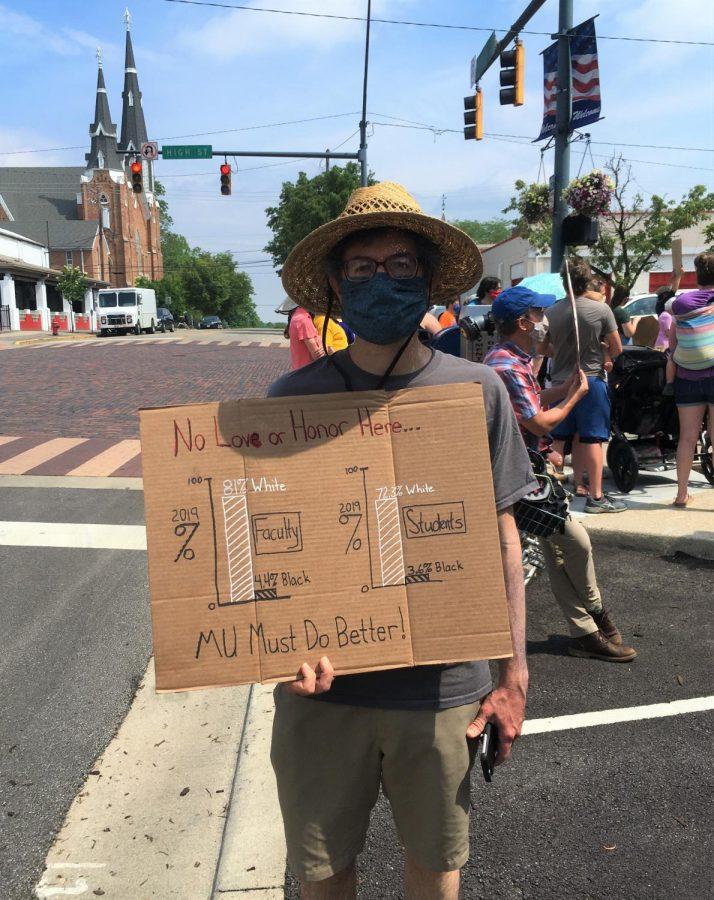 Three Miami students who attended the marches in Cincinnati last weekend hustled from Monday to Wednesday to organize and publicize a Thursday protest in Oxford. I enthusiastically attended.

Nicole Newsome, a rising senior majoring in media & culture, Charlie Paul, a rising junior currently majoring in instrumental music education, and Charlotte Oestrich, a recent graduate from the master’s program in rhetoric and composition who has a background in community organizing, led a peaceful protest march of around 250 Oxford residents, including students, professors, and community members.

Starting with introductions and a statement of ground rules for non-violent protest at the Tri Community Park, we marched with our signs up Spring Street past the Kroger shopping center, then north to the police station on High Street.  March leaders led the group in chants of “Black Lives Matter” and “No justice, no peace!” along the way. Then we headed to the courthouse to stage a nine-minute “die in” to symbolize the duration that former Minneapolis police officer Derek Chauvin applied the “knee-on-neck hold” to George Floyd, asphyxiating him against the pavement.

Lying flat on our stomachs on the sidewalk and hot, brick-covered parking spaces in front of the building, we feel that duration acutely. Time passes slowly in such moments of meditation. I think about the strange disjuncture between living in beautiful weather and planting a garden here with my kids as the world burns, and about what this protest might have felt like a mile outside of town, where the district turns bright red and even canvassing draws hostility.

My mind drifts to the bothersome image that Miami University presents of itself to the public, pablum about how “Miami is ‘college as college should be,’” and remember that our brick fantasy-land plopped in the woods was once a part of the North that fought for the South, near to where the KKK was recruiting even into the 1960s.  MAGA signs ubiquitous between Oxford and Cincinnati testify to this legacy, as do the occasional racial slurs that pop up in MU student group chats.  “It’s crazy how long nine minutes seems to take,” says Oestrich into her megaphone.

As we walked back to the TRI, I talked with Amber Franklin, an associate professor of speech pathology who serves on the Oxford Police Community Relations & Review Commission (PCRRC). She spoke hopefully about the openness of the city’s current police chief, John Jones, and mentioned that residents will have the opportunity to “discuss policing in America in light of current events and what steps would be appropriate in Oxford” on a Zoom call scheduled for 7 p.m .Thursday, June 11 (check the city’s YouTube page or website early next week to find the Zoom call link).

The commission especially wants to hear citizens’ thoughts about how Oxford can continue to build trust between residents and police, and recommendations about what the PCRRC might do to help facilitate this process. This year, she said, the commission is grateful to have access to the first dataset on traffic stops by race in Oxford. It has requested that the Oxford Police Department begin collecting data as well on officer-initiated pedestrian stops, about which members of the community have expressed concern over the last few years.  For those who would like to participate in this conversation, Franklin recommended reading current policing policies and considering how the City of Oxford might best implement the evidence-based suggestions on the website 8cantwait.org.

So what’s next? “We’re going to keep fighting,” said Newsome.  I plan to fight along with her.

Andy Rice is an Oxford resident and an assistant professor in Miami’s Department of Media, Journalism & Film.