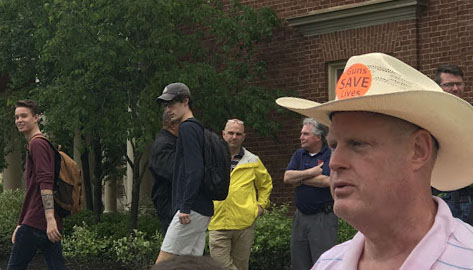 effry Smith talks about his philosophy on the right to carry guns on the steps of Armstrong Student Center as students passed by May 3. Photo by Quentin Baker

By Riely Miracle and Quentin Baker

A group of Second Amendment advocates led by Jeffry Smith marched through Miami University’s campus carrying their guns on Friday, May 3.

“The route wasn’t specific, but was focused on where the most people would be,” said Smith.

“The goal was to generate open conversation between those of us who participated, or even just among students themselves.”

Smith asked participants to keep chambers empty on all long weapons and to leave all firearms’ safety mechanisms on.

“I take steps to minimize the opportunity for things to go wrong or for people to intentionally cause danger,” he said.

Prior to the event, Miami President Gregory Crawford sent out an email to all students making them aware of the planned demonstration. According to an official statement the university issued, while school policy prohibits faculty, staff and students from carrying guns on campus, “Miami students wishing to participate in the walk will not face disciplinary action for violating the Code of Student Conduct.”

Few students who joined Smith and his volunteers in the march. However, the participants were very open to conversation with anyone interested in speaking with them.

“I think it’s great that people are expressing their rights in a safe and informational manner,” Miami junior Ronnie Turner said as he observed the event.

Other students, such as sophomore Sam Miller, wondered why anyone felt the need to carry a gun on campus. “Yes it’s legal to open carry in Ohio, but it still makes me nervous that people are walking around with assault rifles.”

Princess Kuevor, a volunteer who said she has been to several of Smith’s rallies, said she thinks these open carry events are important because they emphasize personal rights.

“I use my vacation days to come out and express my rights,” Kuevor said.

“I am out here to represent people of color, and exemplify that people need to exercise their rights and be informed about what is happening outside of the media,” she said.

“Every one of us loves the conversations we are able to have,” Smith said. “We enjoy giving information to anyone who wants to learn more, along with hearing opinions students have, both negative and positive.”