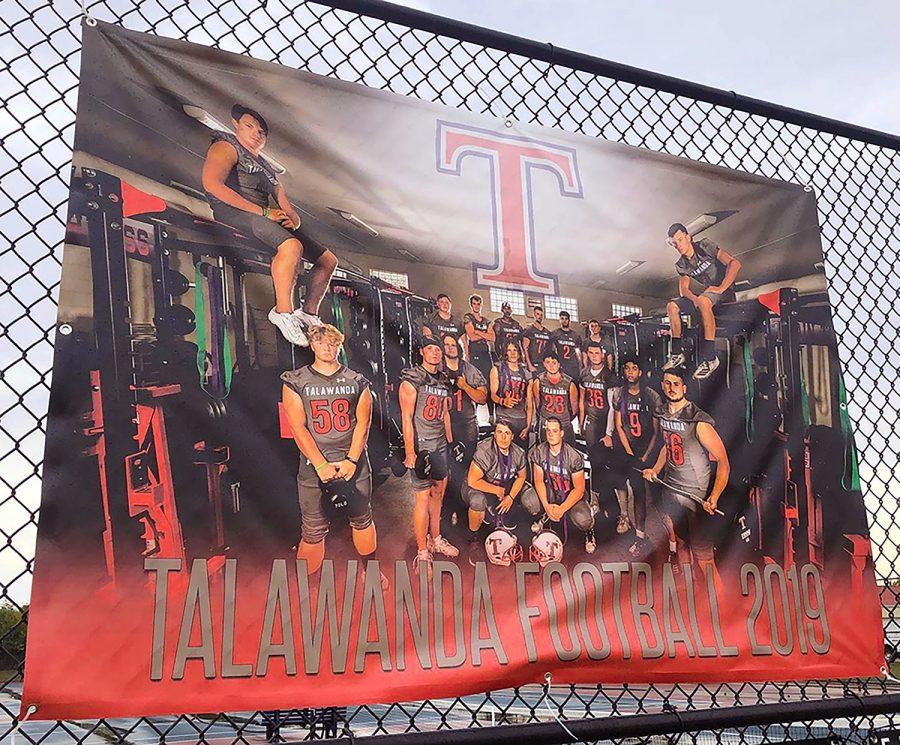 A banner showing layers on this year’s Talawanda football team in the high school weight room. Photo by Massillon Myers

When Larry Cox took over in December as head coach of the Talawanda Brave high school football team, he had a lot of work to do.

The team was coming off a four-year stretch where they went 5-35. Through the addition of “The Creed” and intentional team relationship building, the Brave are changing the culture of Talawanda football.

This season, they’re 6-2 and eyeing a playoff game.

“When I first got here, and we had our first meeting, I walked in and they were all sitting with their heads down, looking at their cell phones,” said Cox. “They looked like maybe they had been defeated. Getting the attitude of get the eyes up, be proud, be proud of who you are and what you do, I don’t ask the kids to go where the coaches aren’t going to go. They’ll say it, where one goes, we all go.”

Cox was hired last December after leading Lakota West for 21 seasons. As coach of the Firebirds, he compiled a 114-103 record, including co-championships in 2009 and 2013, five playoff appearances and an appearance in the regional semifinals in 2014. Cox took over this year after J.D. Vonderheide resigned in November after seven seasons with the Brave.

Cox came in looking to transform a program that hadn’t had a winning record since 2014. He set about instilling a set of core values in the players that focuses on putting the team above the player.

“If we can teach them ‘team above me,’ your chance for success doubles,” said Cox. “If we can get them to reach these values, the winning and losing will take care of itself.” 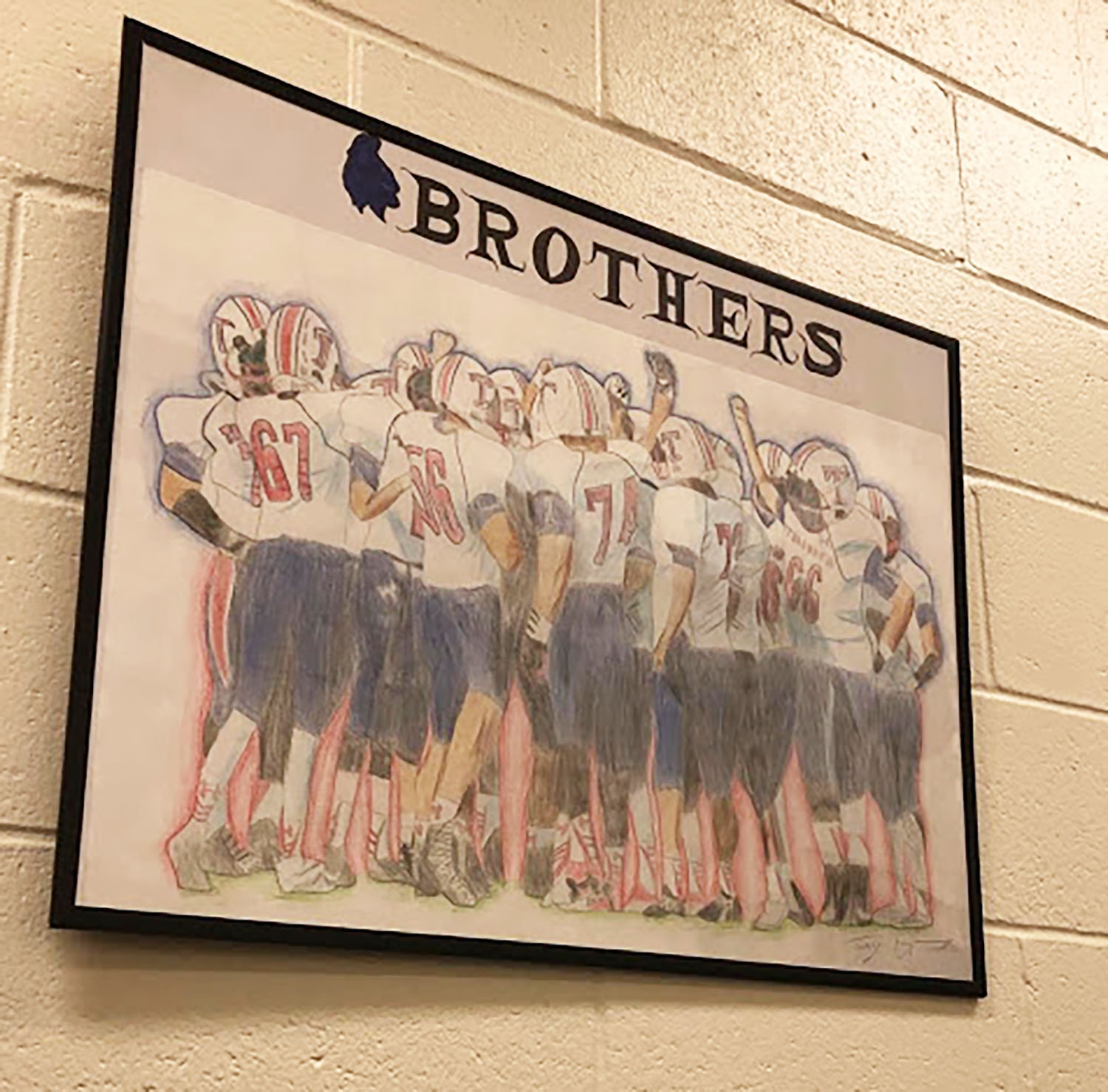 Hanging in the coach’s office, a drawing by senior lineman Tony Ditullio depicts the team in a huddle with “Brothers” across the top. Coach Cox has worked to instill a relationship-driven atmosphere. Photo by Massillon Myers

When Cox was announced as coach, there was excitement surrounding the team. The players bought in immediately, especially the seniors, and that helped to begin the transformation of the culture of the program. In the coach’s office, there is a drawing of Talawanda players huddled together with the caption “Brothers” across the top that was drawn by senior lineman Tony Ditullio.

“There’s a totally different vibe to the team this year than there’s been in the past,” said the two-year captain and senior outside linebacker Dalton Norris. “Last year really wasn’t what we wanted but coming into this year, we had high expectations for what some thought we shouldn’t have had. Coming off of a 2-8 season, a lot of people looked at this as a rebuilding year.”‍

Playing and practicing with a creed‍

This change can be attributed to “The Creed”, a statement the players say before each game, practice and lifting session. According to Cox, the creed states “I am a Talawanda football player. I will put my team first. I will produce. I will never make excuses. I am an example on and off the field. I am respected for my honesty, mental and physical toughness.”

“The creed is kind of what we started off of,” said Norris. “That first meeting, Coach Cox has said a lot that our heads were down, we didn’t have an identity. We were upset at ourselves because we knew what we could’ve been, but we didn’t produce. So that creed was the first cement into the change that we knew we were going to have to have going into this year. Us saying it after every lift and every practice, that cemented our legacy of what we wanted to be remembered by.” 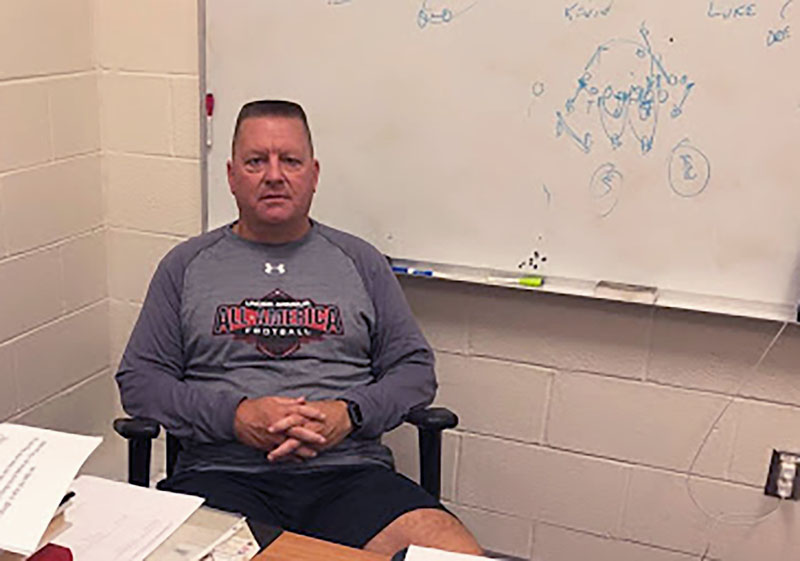 Coach Cox sits in his office before practice. Photo by Massillon Myers

Injuries were a big part of the storyline behind the team’s 2-8 finish. Twelve players suffered season-ending injuries during last season.

This year, Cox cut down on the length of practices and increased the focus on weight lifting to mitigate injuries. Cox also came in wanting to focus on “prehab” exercises to prevent injuries and when there are injuries, to make sure that the player fully recovers before having him practice or play again. ‍‍

“I grew up at a time where a 2.5-hour practice was common, and you just can’t do that anymore,” said Cox. “When you look at the benefits of length, they don’t outweigh the risk because injuries happen more often towards the end of practice.”

The Brave practice Monday-Thursday, play a game Friday night, review the previous day’s game during “Tell the Truth Saturday” and get Sunday off. In addition, they lift as a team, supervised by the coaches, three days a week. Cox also has a specific practice schedule that is unique to each day and outlines what will be focused on in each segment of practice.

The Brave are fighting for a playoff spot in the Division Two playoffs, with two games remaining, both at home. They face Northwest (1-7) at 7 p.m. Friday, before closing the season against Ross Friday, Nov. 1. 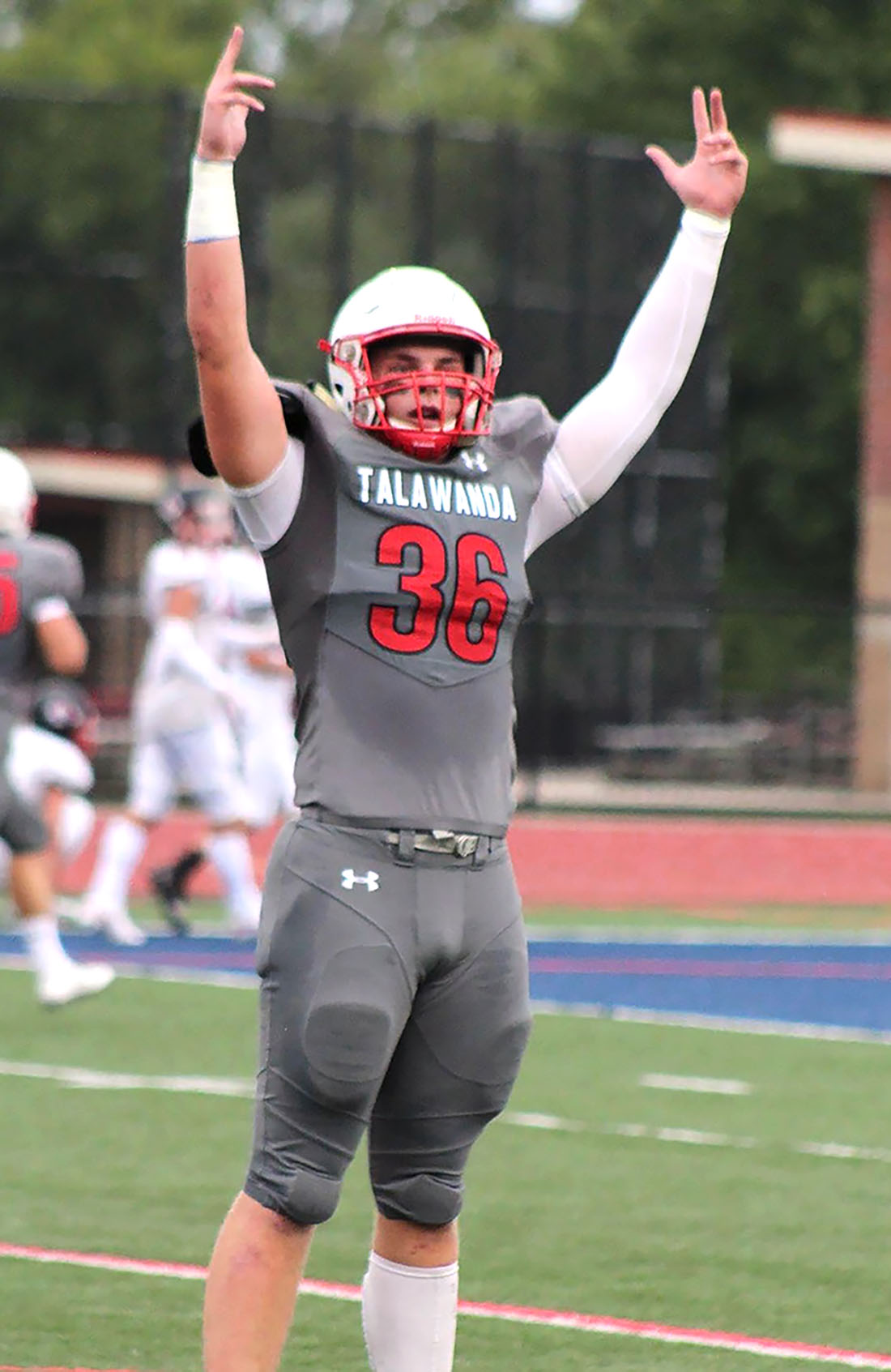 A playoff appearance would be a huge turnaround for a team that went 5-35 over the past four years, something that Norris attributes to Cox.

“He expects a lot out of everyone. With those expectations, competition breeds itself. Going into practice knowing it’s competition every single day, it makes guys want to be better. This change has been a whole different culture because of Coach Cox coming in.”

Although they’ve had a good season so far, record-wise, that’s not the only thing that matters to Cox.

“It’s easy to look at the record and say you’re happy,” said Cox. “I’m happy about the progress we’ve made in relationships with the kids. To me, that defines your success or failure. Are you able to establish a relationship where you get each other? That’s when you’ve got some success. I’ve had teams that didn’t have winning records, but they were very successful seasons because you reached them, and you got the most out of them. I love the fact that our kids took ownership and said, ‘This is our team, this is where we want to go, help us’.”