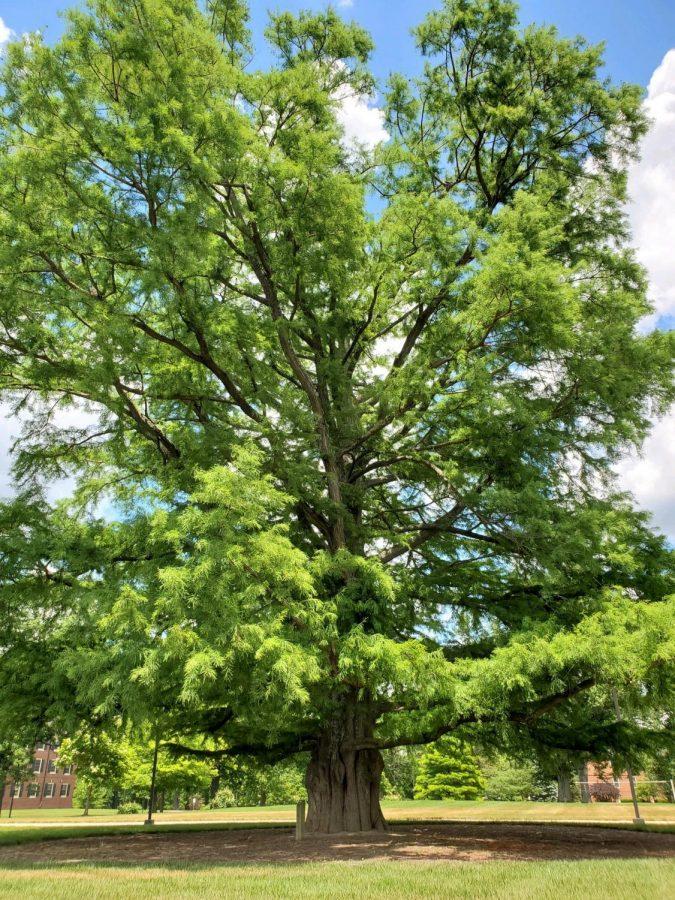 This Osage Orange is number 53 on the tree walk and sits near the site of where Wilson Hall used to be. Photo by Blake Boyd

Miami students and Oxford residents alike can expect to see a new museum exhibit on campus soon after they return in the fall.

For the past few years, Hefner Museum director Steven Sullivan has been working to develop an outdoor museum exhibit to highlight the trees on campus. Installation was scheduled for the spring, but has been postponed due to the pandemic, and is now planned for the fall of 2020.

Called The Trees of Miami, the exhibit isn’t completely new; Sullivan is building on the foundation of Miami’s original “tree walk.” First installed in the early 1990’s, it’s still around today and consists of wooden posts with numbered, colored tags on them. Each number correlates to a different species of tree on a map, and each color is one of three routes covering Western campus, Central Quad and the Formal Gardens. Over the years, it has fallen out of use, and today tags are scratched, posts are damaged or missing altogether, and some trees have been removed entirely. The university has maps for all three routes, but they’re outdated and difficult to get a hold of. 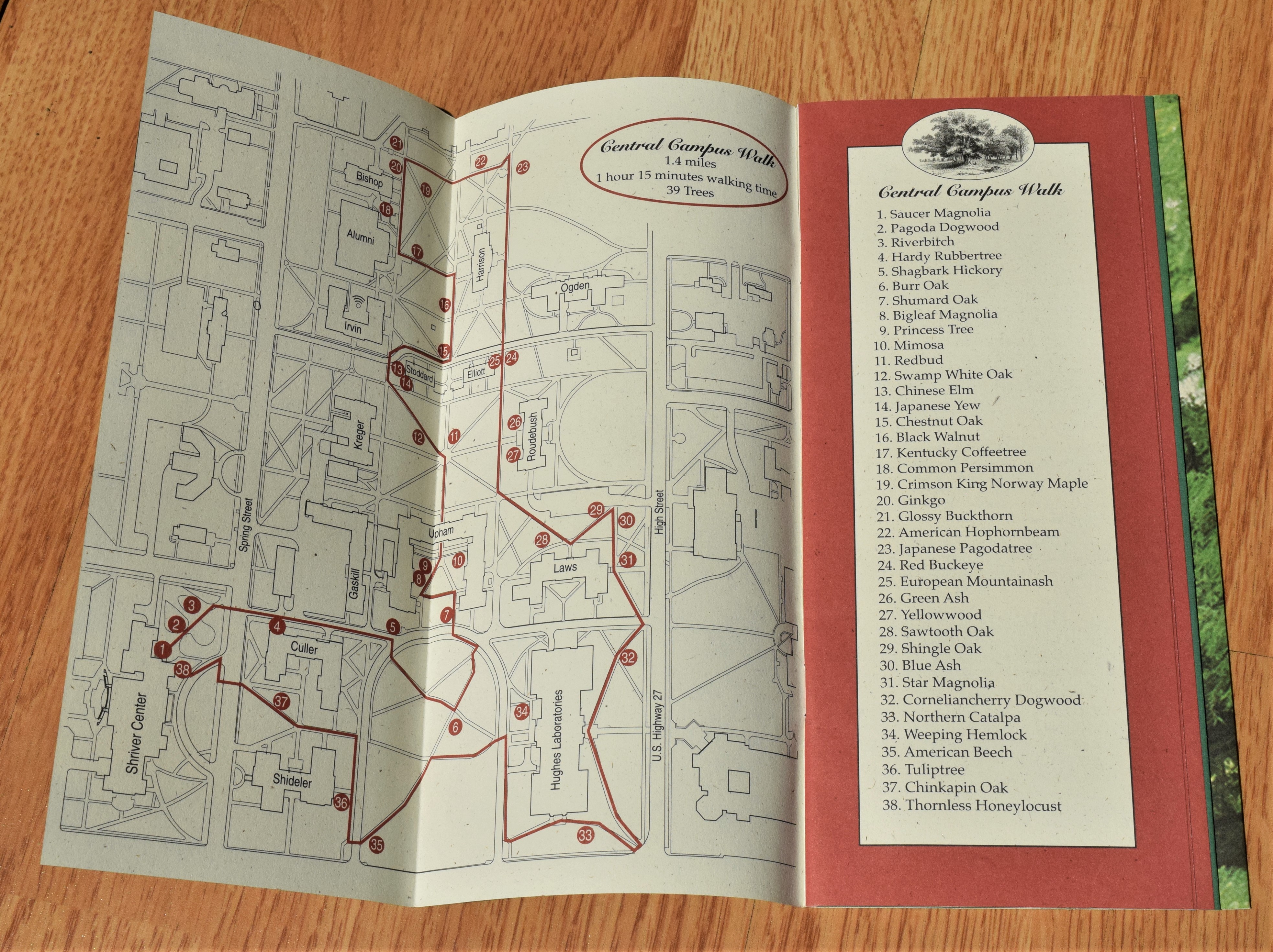 A map and brochure describing the original tree walk through the Miami campus. Photo by Steve Sullivan
Yet, it hasn’t been faculty who’ve been working on the exhibit– it’s students. Students in Sullivan’s FYRE (First Year Research Experience) class have been responsible for carrying out research every step of the way. Students in the first FYRE class began several years ago by conducting surveys to gather information on how familiar their audience– the staff, faculty and students of Miami– were with the trees around them. 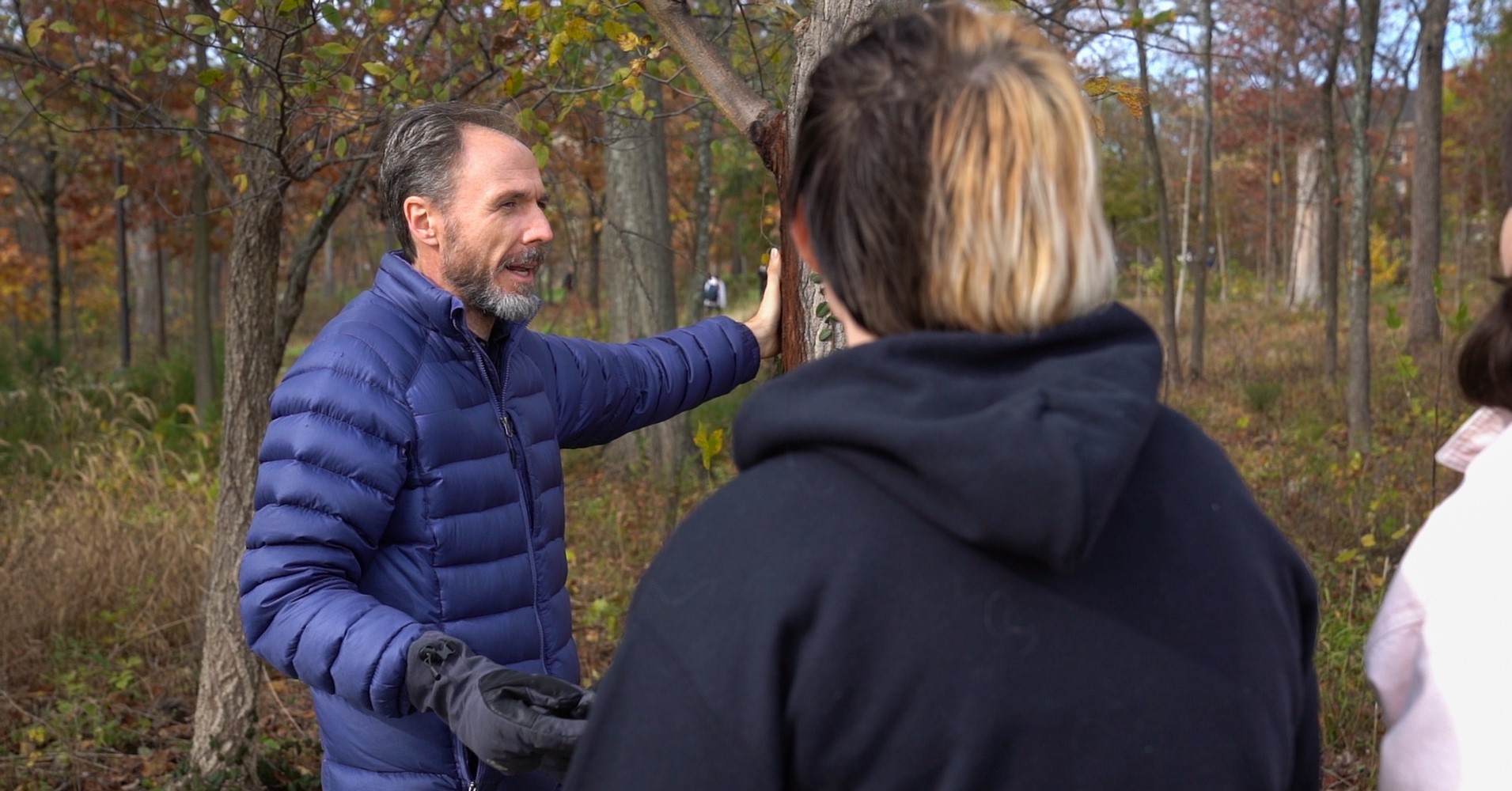 They designed new labels for the walk that will consist of a short paragraph about the species, accompanied by a relevant illustration, and the species’ name in its common, scientific and indigenous form. These past two years, students worked on the researching and writing information for the labels. They’ve even sought out two student artists to do the illustrations. 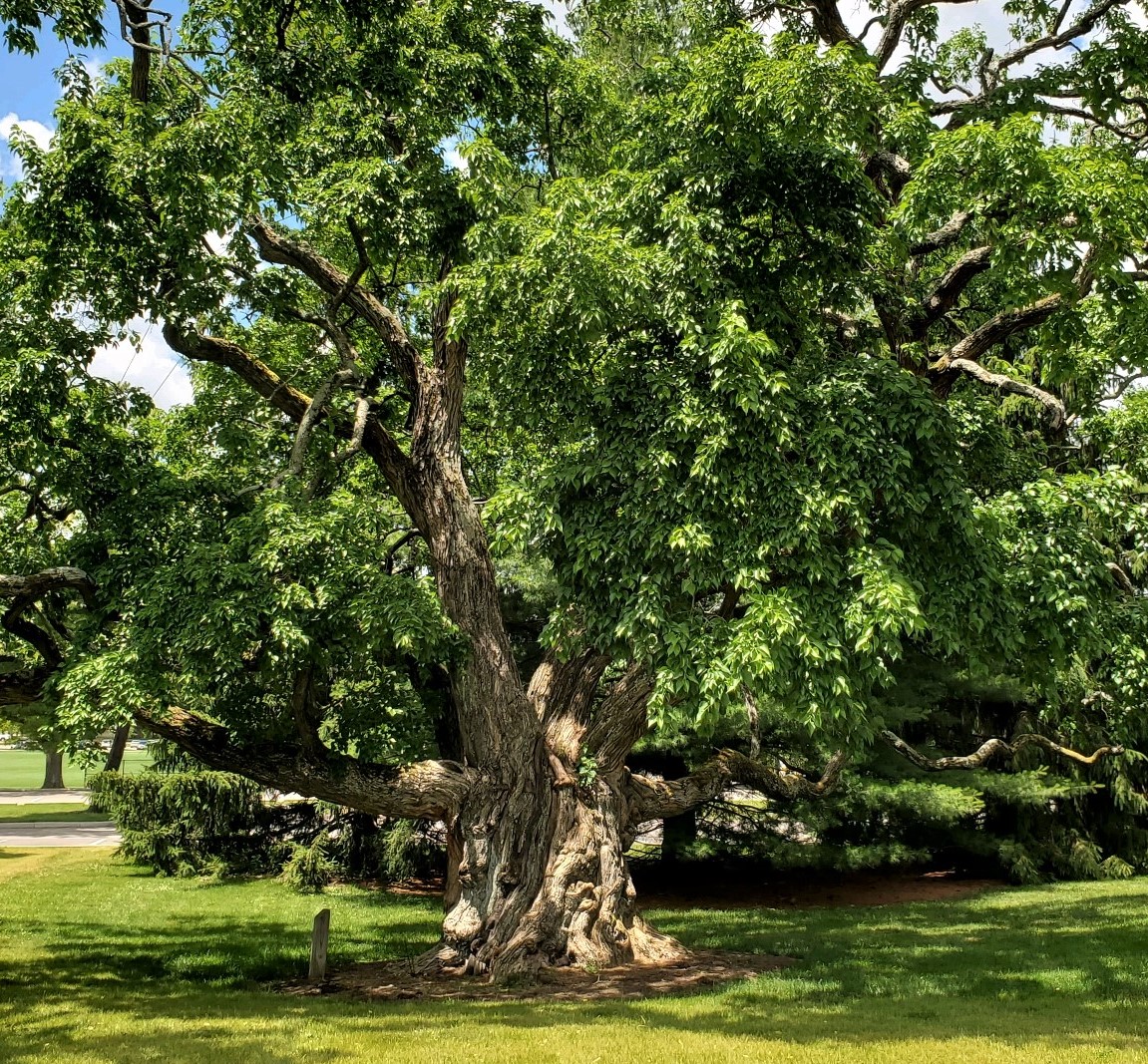 The Bald Cypress is number 48 on the original walk and sits behind Dorsey Hall, on the road leading to the Marcum Conference center. Photo by Blake Boyd
‍

Darin Banks and Elizabeth Hedge were the first students to work on the walk in the ‘90s. At the time, Banks was a sophomore, conducting an independent study for Professor Jack Keegan. Keegan was the one who had the idea for the walk, Banks said, and told him “to just run with it.” Banks identified “great specimen trees around campus,” but wasn’t too familiar with the layout of campus itself.

That’s where Elizabeth Hedge came in.  ‍
A new exhibit from an old walk
The tree walk’s revitalization began several years ago when the museum was approached by Jim Oris, then-vice president of Research and Innovation, to be part of a team to highlight the biodiversity and ecosystems of Miami’s campus. 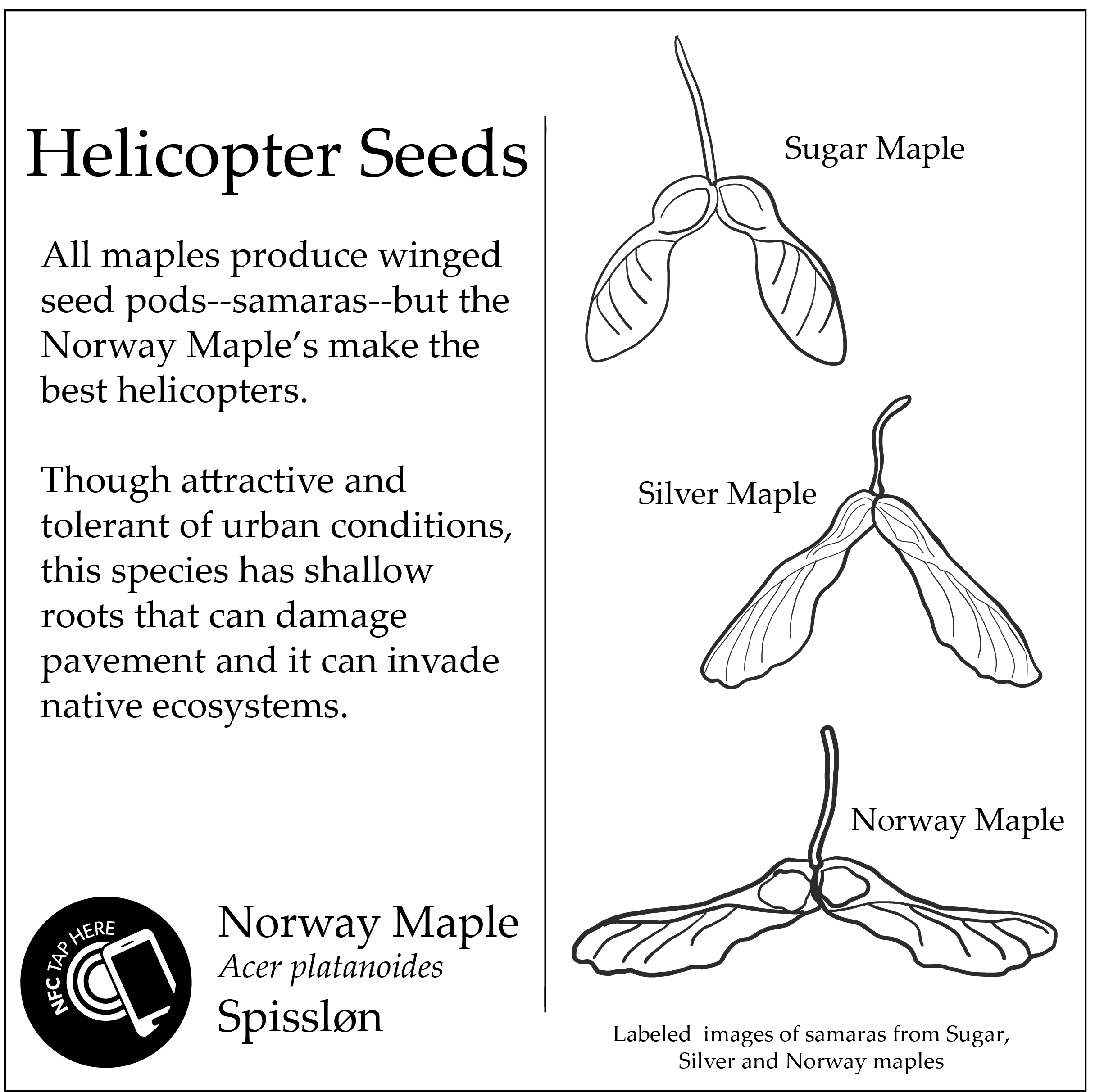 A mock-up of the new panel design that will be next to the trees on the tree walk. Image provided by the Hefner Museum of Natural History
‍

“We identified the living tree collection as one of the university’s major assets and one that would benefit from a higher profile,” Sullivan said. Around the same time, Research and Innovation also came to him with the idea to create a first-year research course that wouldn’t be lab based– and therefore appeal to both STEM and non-STEM majors. “Synergy between the museum’s expertise and resources, the need for a revitalized tree walk, and the need for a FYRE class that appeals to a diverse, creative cohort of students resulted in….the current FYRE course,” said Sullivan.

Ginny Boehme got involved when Sullivan approached her in the spring of 2018 about co-teaching the class with her. Boehme is a science librarian in the Advise & Instruct department and an information literacy instructor, meaning she often visits classes, or teaches her own, to talk about and teach research skills. Boehme said she hopes students get “an expanded appreciation for how complex and vital trees are to the entire planet.” 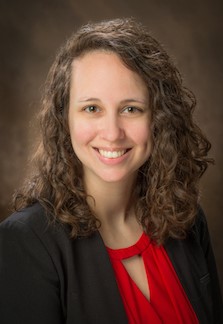 Ginny Boehme hopes the Tree Walk will  become a resource for people on campus and off. Photo provided by Miami University
‍

Looking to the future, Boehme hopes The Trees of Miami will become a digital, accessible resource for people both on campus and off. The team has plans for a website with more information on the species and further reading suggestions for visitors. Both Boehme and fellow student Castor LaPack hope the exhibit will be utilized by professors and their classes. “There’s a lot more to plants than botany or biology,” LaPack said. 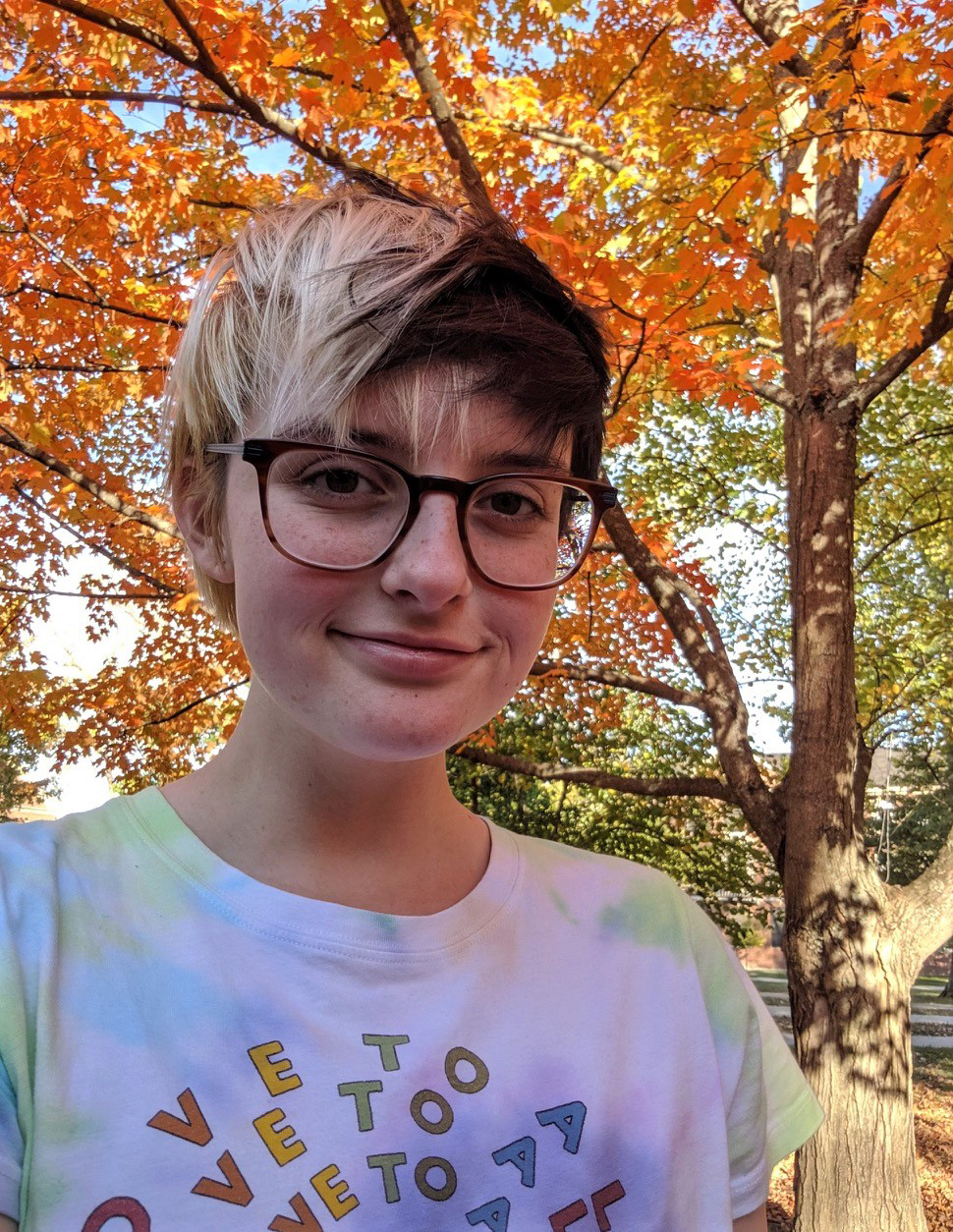 Student Castor LaPack says there is more to trees that botany or biology. Photo provided by Miami University
The walk is just one part of a larger trend toward sustainability in the area.
Oxford has long been a ‘tree city’
Oxford has been an official Tree City every year since 1986. Established by the Arbor Day Foundation, becoming part of the Tree City USA program “provides the framework necessary for communities to manage and expand their public trees.” Oxford has almost 4,000 public trees.

This spring, the city amended its zoning ordinances to protect trees and vegetation within the city. Additionally, the city has been working to combat the Emerald Ash Borer, an invasive insect that has devastated America’s ash trees.

Meanwhile, Miami University has focused on infrastructure, most notably the installation of a geothermal energy plant for heating and cooling buildings on Western campus a few years ago. A club was also formed by previous FYRE class students. Called No Tree, No Shade, they have created a way for people to get together and raise awareness about the trees on campus.

Sullivan and Boehme are both Oxford residents, and both said that one of the easiest ways for residents to be sustainable is to plant pollinator-friendly plants and flowers. If residents want to get involved with trees, Sullivan said, “go to local nurseries that breed trees. . . select a native species, and follow an arborist’s suggestions for planting and care.” Even if you don’t have much space, Sullivan said, a planter of pollinator-friendly flowers can make a difference.

The best time to plant a tree was 20 years ago, Sullivan says, but the second-best time is today.