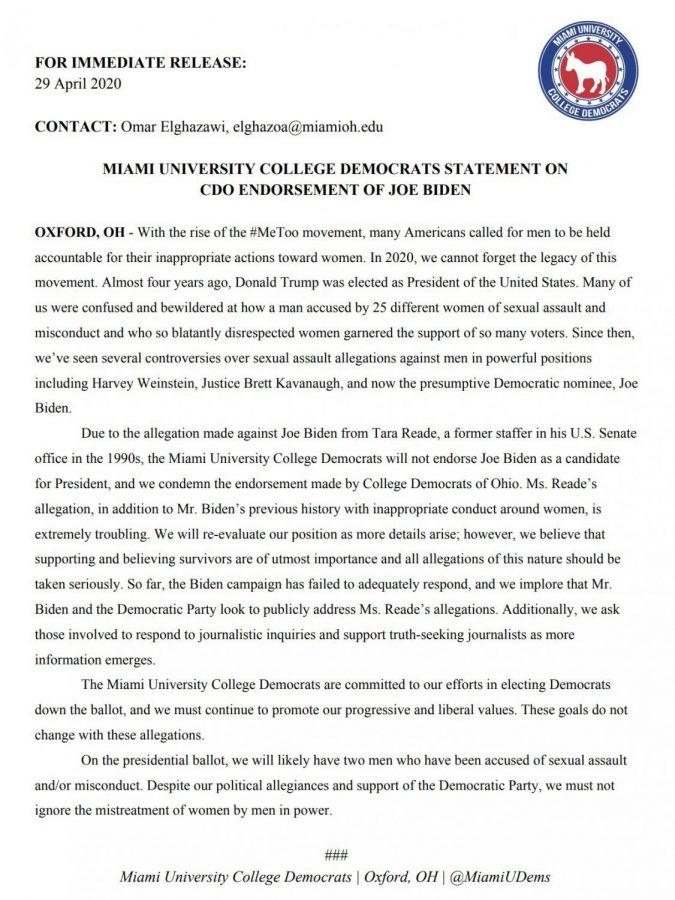 The press release by Miami University College Democrats explaining why the group will not endorse Joe Biden for president. The release was posted on social media.

Citing allegations by a former senate aide that Joe Biden sexually assaulted her in 1993, Miami University’s College Democrats have refused to endorse Biden for president.

MUCD ‘s executive board explained the group’s position in an April 29 press release that it posted on social media: “On the presidential ballot, we will likely have two men who have been accused of sexual assault and/or misconduct. Despite our political allegiances and support of the Democratic Party, we must not ignore the mistreatment of women by men in power.”

Tara Reade, a staffer in Biden’s senate office in 1993, was one of several women who came forward last year saying that Biden made them uncomfortable by touching their hair shoulders and neck. In recent weeks, Reade told CNN and other news outlets that once, while she worked for him, Biden pushed her up against a wall and inserted his fingers into her vagina. She said the incident happened somewhere in the Capitol complex.

She told CNN she filed a complaint at the time with a Capitol personnel office regarding uncomfortable interactions, but not alleging sexual assault. She said she does not have a copy of the complaint.

According to CNN, a former neighbor of Reade, a friend from the time and her brother, all have said recall Reade telling them back in the 1990s about having been touched and or assaulted by Biden.

Biden appeared on the “Morning Joe” show on MSNBC last week and adamantly denied Reade’s allegations. He asked the secretary of the Senate to do a record search for any complaint Reade may have filed. However, Senate rules prohibit such records from being searched or released for 50 years.

Caroline Roethlisberger, president of MUCD, said she believed the group’s statement reflected her generation’s “changing views on the importance of not dismissing sexual assault allegations.”

MUCD tweeted a photo of the press release last week. The tweet received dozens of replies and more than 500 likes. That’s almost half of the organization’s 1100 Twitter followers. Almost every reply was approving of the decision. One person even replied that “MU just moved way up on my kid’s college search list.”

But one replier to the tweet was displeased with MUCD’s decision. 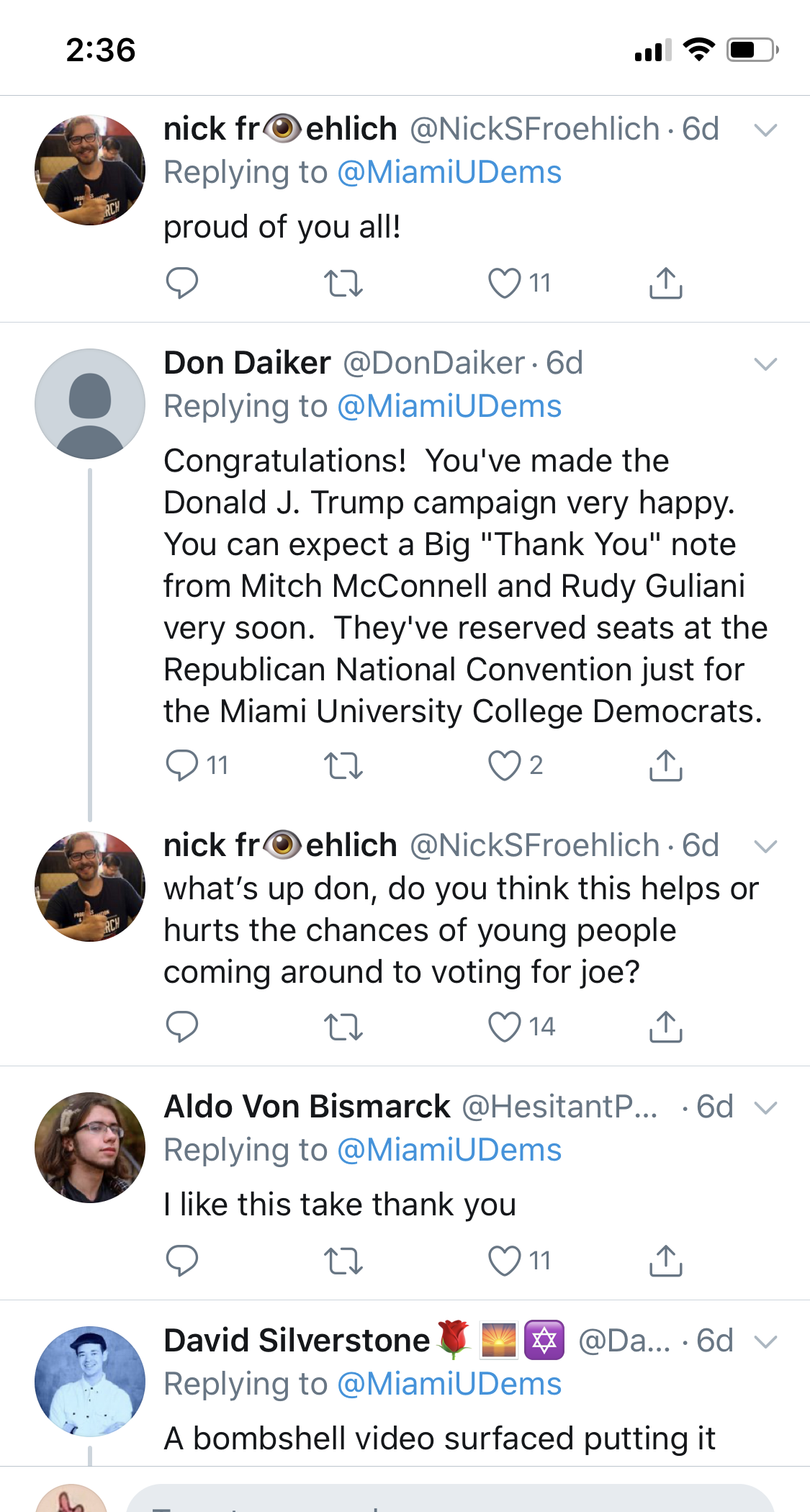 Don Daiker, founder of the Butler County Progressive PAC, slammed the college democrats on Twitter for their position, saying it helps Donald Trump.

Don Daiker, a professor of English Emeritus at Miami and founder of the Butler County Progressive PAC, took to Twitter for the first time since 2018 to voice his discontent with MUCD. Daiker’s reply, which in turn triggered a dozen more replies directed to him, sarcastically congratulated the Miami college Dems for “making the Donald J. Trump campaign very happy.”

“You can expect a big ‘Thank You’ note from Mitch McConnell and Rudy Giuliani very soon,” Daiker fumed. “They’ve reserved seats at the Republican National Convention just for the Miami University College Democrats.”

Nick Froehlich, a Miami alum and former College Democrats board member, questioned Daiker’s statement, replying “Do you think this helps or hurts the chances of young people coming around to vote for Joe?”

More replies rushed in to Daiker’s tweet. “It’s a good thing you aren’t a professor emeritus of Social Justice Studies or Women and Gender Studies,” said one student. “Rape is wrong, Professor. It is a crime no matter who does it,” said another.

One particularly scalding reply accused Daiker of using his university position to “chastise a group with a large number of women when they speak up against sexual assault.”

“Systemic power structures like the one you’re perpetuating are why so many remain silent,” read the reply.

Regarding Daiker’s comments, Roethlisberger said they were not completely unexpected. “Everyone is able to express their views on Twitter,” she said. “Unfortunately, politics regarding sexual assault allegations are often met with controversy.”