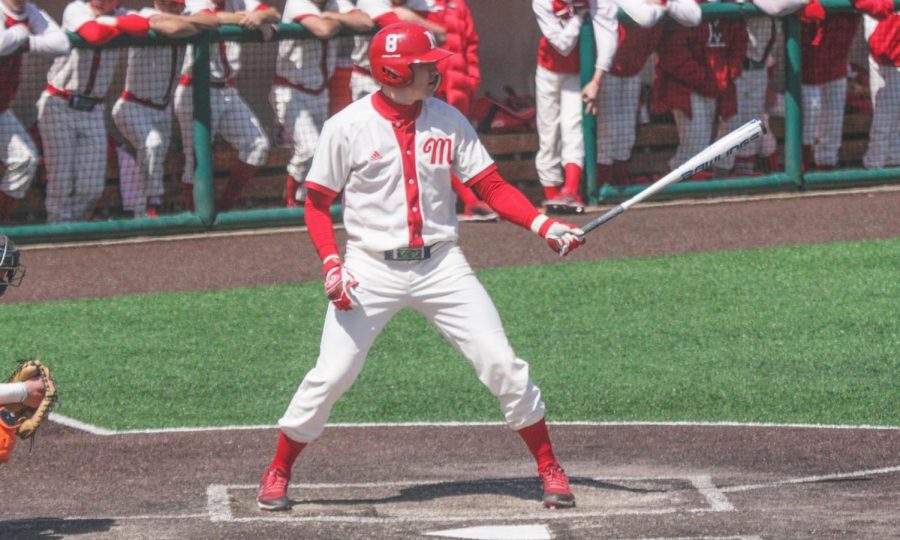 Hamilton native and Miami University senior Landon Stephens signs as a free-agent with the Atlanta Braves Sunday. Stephens was named First-Team All-Mid-American Conference as a junior and finished his collegiate career third all-time in Miami history with 53 career doubles. Photo courtesy of the Miami Athletic Department

When Landon Stephens stepped off the turf of Miami’s McKie Field at Hayden Park on March 12, he didn’t know when or where he would step on a baseball field again.

That answer became a little more clear on Sunday when the Hamilton, Ohio native was signed by the Atlanta Braves after the shortened Major League Baseball draft was completed.

The draft was held virtually, June 10-11 and according to Major League Baseball, teams had to wait until 9 a.m. EDT, June 14, to sign undrafted players. Stephens didn’t have to wait long on Sunday to know his fate.

“Right at 9 o’clock the Braves called me and asked me to be a Brave,” Stephens said. “I achieved my dream of being a professional baseball player. The rest of the day was pretty easy.”

This year due to COVID-19, the MLB draft was set for five rounds instead of 40, so Stephens knew his chances of being picked were slim.

“I kind of knew I wasn’t going to be drafted in those first five rounds, so for me, it was a waiting game till Sunday,” Stephens said.

After a junior season in 2019, which saw him earn First-Team All-MAC honors, Stephens had a shot to be drafted, but the call never came. He came back to Miami for his senior season and put together a solid first 15 games before the rest of the season was cancelled.

“I’m so happy for him,” Miami baseball coach Danny Hayden said. “It was definitely a real sense of pride and I’m really grateful and happy for him that he got that opportunity because he worked hard enough to earn it.”

The outfielder signed the contract Monday night and in the next few weeks the Braves will connect with their newly-signed players in various ways to bring them into the organization, according to Stephens.

“From an organizational standpoint, they said that they are going to get some new guys on some Zoom calls with upper level management to get to know some faces, say hello, and get welcomed into the organization,” Stephens said. “Then they’ll disperse us based on position and have us talk to the hitting coach. Just to get acclimated with the organization and understand what they’re about.”

Stephens grew up 20 minutes from Oxford and played on the Hamilton Little League baseball team that played in the 2010 Little League World Series in South Williamsport, Pennsylvania. Initially, he didn’t want to go to Miami but ended up picking the school because of the tradition of the baseball program and the Farmer School of Business.

“I always told myself that I didn’t want to go to Miami, as funny as that is,” Stephens said. “But when it came down to it and I was old enough to understand all the positives about Miami and how beautiful the campus is, I knew that if baseball didn’t work out, I would have a positive future.”

The utility player moved around from second and third base to outfield and played and started the last 71 games of his junior and senior seasons. Before the 2020 season was cut short due to the NCAA baseball suspending the season because of COVID-19, Stephens led the team in hits, RBIs, walks, and doubles, was second on the team with three home runs and was third on the team with a .311 batting average.

Stephens put together one of the best hitting seasons for the RedHawks which saw him finish his collegiate career with a .301 batting average. He’s third all-time in Miami history with 53 career doubles, tied for 10th with 11 triples and 136 RBIs. In 2019 he earned First-Team All-Mid-American Conference honors after hitting .310 with nine home runs and 46 RBIs.

“For me going to school at Miami was an absolutely awesome experience,” Stephens said. “They helped develop and grow me into the person I am and for that I’m forever grateful to my coaches, teammates, professors, family, the City of Oxford and Miami University. I’m just grateful and it’s an awesome place and to go and spend four years there was quite a blessing.”

He had a prolific career at Miami, but the highlight came the last game of the shortened season, March 12 against Penn State. Before the game, it was announced that the NCAA would be suspending the season.

“That was probably one of the most fun days I’ve had on a baseball field,” Stephens said. “There was freedom to just play the game and have fun. Competing against Penn State, a Big Ten school, you want to win but you also want to show that you can compete with some of the bigger schools.”

The RedHawks won the game 5-1 thanks to a three-run home run by Stephens in the sixth inning. That would be the last home run he hit at McKie Field.

“I hit a home run that put us ahead and I remember after I hit that home run, I got to home plate and pointed to my dad who’s been at every single game and I remember getting teary-eyed,” Stephens said. “It was like I knew that it was over.”

His Miami career may be over, but he’s onto the next challenge of making it at the professional level. That’s something he’s dreamt of since he started playing baseball at the age of 5.