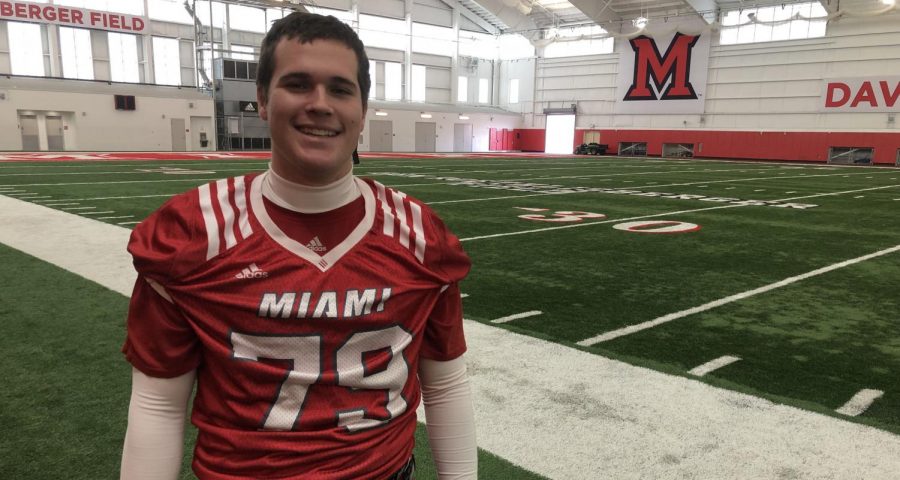 Miami RedHawks senior placekicker Samuel Sloman didn’t begin kicking until his junior year of high school. He played soccer all his life, but not football.

Now, he’s one of the 20 best kickers in the nation.

A few weeks ago, Sloman was named a semi-finalist for the Lou Groza award, given to the nation’s top collegiate placekicker. The award is named after National Football League Hall of Fame kicker Lou Groza, who played 21 seasons with the Cleveland Browns and pioneered the kicking position. He won four NFL championships and was named the NFL player of the year in 1954.

Since the award was first handed out in 1992, 27 finalists including 15 winners have gone on to play in the NFL. Some of the most notable Groza award winners include Sebastian Janikowski, Mike Nugent, and Dan Bailey. Sloman looks to add his name to the list Dec. 12 when the winner is announced live on ESPN at the Home Depot College Football Awards Show.

“I think it’s a testament of not only my hard work but also Crabtree and Kyle. You can’t make a kick without a good snap and a good holder,” Sloman said. “Especially our O-line, they’ve put a big emphasis on doing their job, which you don’t get that everywhere.”

Sloman is putting together quite the impressive season. He’s made 19-23 field goals, including a long of 53 yards, the game-winner against Ohio University. He ranks fifth in the nation with 19 field goals made and has the eleventh longest field goal made (53 yards), and is first in fieldgoal percentage from 50 yards and further (75%).

Sloman grew up playing soccer in Atlanta, Georgia. It was his favorite sport, but he knew he wasn’t going to have a future playing it beyond high school. He also grew up going to Georgia Bulldogs and Atlanta Falcons games each week, so he was a big football fan. It wasn’t until his junior year of high school that he tried kicking for the Pace Academy high school football team. He had a good season and got recruited to play at Miami.

“If you grow up in Georgia, everyone loves football,” Sloman said. “A bunch of buddies were like, ‘you should play, you should play (football),’ because I always kicked around for fun and I was like, ‘I’ll regret not trying it,’ and I tried it out my junior year and it worked out pretty well. I had a good senior year and luckily I was able to end up here.”

“We (kickers) are all in our last year of eligibility, so coming from our first year, seeing each other grow, especially this last year, everyone has made a little bit more of a bigger stride than usual,” senior punter Kramer said. “Seeing each other grow on and off the field has been awesome.”

Last season wasn’t as good as Sloman wanted, so he went back to work in the offseason. He reached out to his coach back home in Atlanta and changed the way he trained. Sophomore year he hit the weight room harder, but in the offseason, he began to do more drill work. He focused more on kicking technique and approach to the ball.

“I don’t really kick in between the hashes that much except during field goal period in games,” Sloman said. “I usually work down the sideline and work on my contact and my steps. I work more on my approach to the ball and my contact with the ball than I do with worrying about the result. Changing and doing drill work has really helped me out in every phase.”

He and Kramer have been the backbone of a special teams’ unit that has been solid this year. Special teams’ coordinator Doug Shearer is in his first season with the RedHawks after serving as a graduate assistant at North Carolina State. He said Sloman, Kramer, and senior long snapper Crabtree have been receptive towards being coached by someone new during their final year. 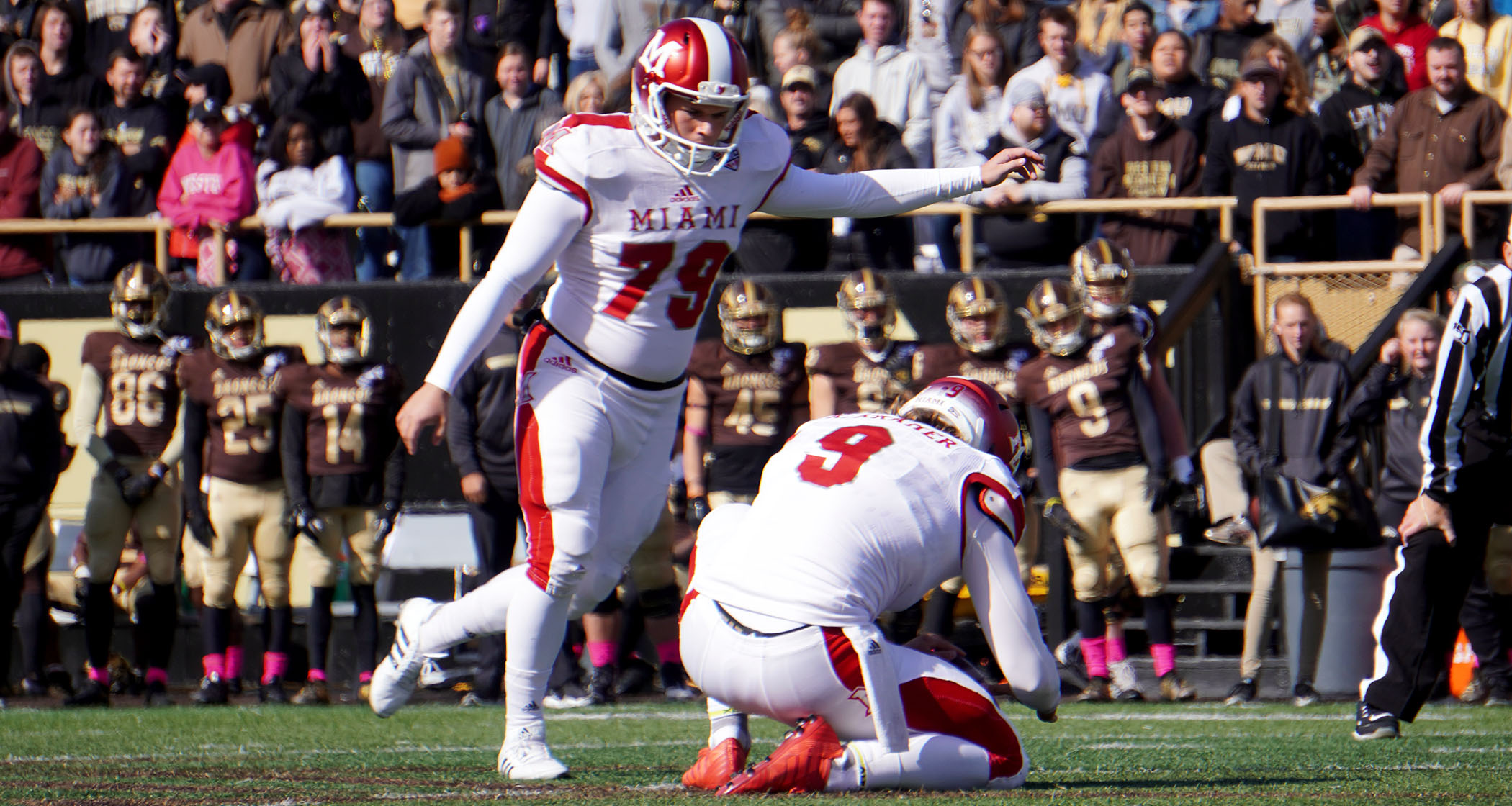 Sloman lines up a field goal as holder Kyle Kramer puts the ball on the ground during a game against Western Michigan this year. Photo by Logan Stevens

‍“It’s an interesting transition because with a new coach their senior year they could’ve easily turned their heads away and kept doing what they’re doing. But they’ve done a great job of being open and I’ve been open too, and we’ve worked together,” Shearer said. “There’s things that they’ve added to their routines and there’s things that they’ve added to my coaching. I always tell my guys that I hopefully learn more from them than they do from me.”

Sloman has a routine he runs through each week. He’s specific about what foods he eats before and after games and what restaurants he goes to.

“Sloman, in particular, has an amazing routine that he sticks to on and off the field,” Shearer said. “When he wants to go to a certain restaurant to eat on a certain night of the week, he is so routine and regimented, I think that’s what makes him so good because he doesn’t flinch. We try to make every kick the same kick, I think that’s been the biggest thing so far.”

When it comes to making long field goals, trying to approach each one the same way is important. Before games, Sloman will test his range from both ends of the field and then report to Shearer what he feels his range is that night. Sloman’s distance is unquestioned but the wind is the one variable.

Last week, Miami (6-4) clinched the MAC eastern division title with the 44-3 win against Bowling Green and booked its spot in the MAC championship game in Detroit. Beginning with the game on Sept. 6, all of the RedHawks games have been televised on ESPN’s networks as part of the deal that was signed with the conference to promote midweek “MACtion.” Sloman hit the game-winner against Ohio in the team’s for midweek game of the season on ESPN.

It’s not every day that Miami sporting events are televised on national television but the RedHawks and the Groza award finalist have taken full advantage of the spotlight.

“It’s really cool,” Sloman said. “It’s awesome for all of us because we see our hard work paying off and getting some national recognition at a place that doesn’t happen all too often.”