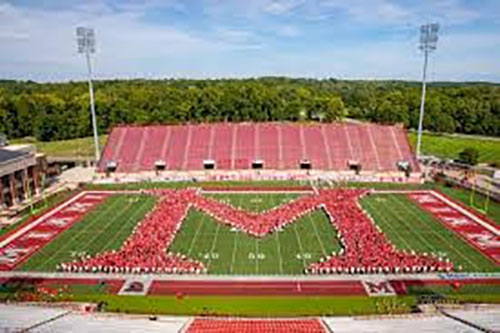 The 4,300 incoming freshmen formed the Miami “M” at Yager Stadium at the start of the fall semester. Photo provided by Miami University

Many American universities have seen declining enrollment in recent years as students struggle with the costly tuition and the prospect of huge college debts after graduation.

According to data from the National Center for Education Statistics (NCES), not all universities are following the trend, including Miami University.

The NCES is a federal entity responsible for collecting data related to education in the United States. After their findings, USA Today published a list of the top 100 colleges which saw their enrollment numbers increase.

Number one on the list went to Southern New Hampshire University. Miami came in at number 90 and has seen its enrollment numbers rise over the past few years.

Each year the freshman classes are getting larger and larger. In 2017, Miami reported a total of 3,991 total students in the freshman class for the Oxford campus, in 2018 the total rose to 4,005, and this year Miami once again rose their all-time high to 4,300 students.

“More and more families are aware of the value of choosing Miami,” said Claire Wagner, director of news and communication for the university.

She pointed to the amount of recognition Miami has received nationally in a variety of areas which makes them so appealing. U.S. News & World ranked Miami number three for undergraduate teaching, and the latest numbers show 96% of Miami students were either employed or on to further education by the time of their graduation.

This third-party validation makes Miami a strong frontrunner for many students and helps keep Miami in front of prospective students’ minds.

Another reason Wagner cites as a bonus for Miami is their ability to recruit from all over.

“We have always recruited across the country and the world,” Wagner said.

This year’s class of freshmen had students come from 43 states and 28 countries with Ohio residents making up about 59% of the class.

Miami has people who live in other parts of the country to help with recruiting and work with high school guidance counselors in addition to sending recruiters to college fairs when they can.

Miami boasts a 68% acceptance rate, but the high number does not mean they are sacrificing numbers for quality. Students in the class had an average high school GPA of 3.78 and an ACT score of 28. Also, 88 of the students were ranked number one in their class and another 34% graduated in the top ten percent of their classes.