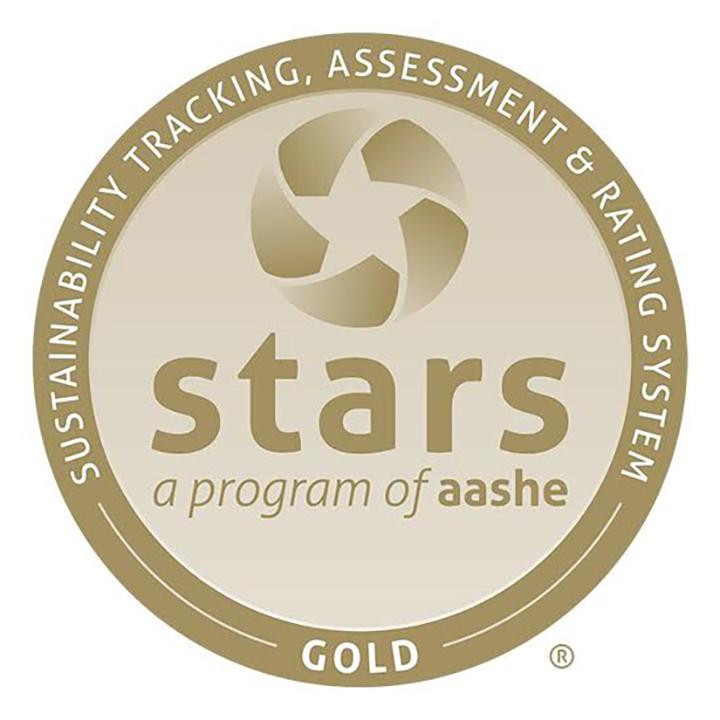 The logo of the Sustainability Tracking, Assessment and Ratings System (STARS). Image courtesy of Adam Sizemore.

In its continuing quest for sustainability in academics, resources and all other aspects of campus life, Miami University has achieved a gold ranking under the Sustainability Tracking, Assessment and Ratings System (STARS), for the first time.

STARS is a transparent, self-reporting framework for 300 American colleges and universities to measure their sustainability performance. This is the first time that the university has achieved a gold rating since it began participating in the STARS program in 2013.

“To say that I’m excited is an understatement,” said Dr. Adam Sizemore, Miami’s Sustainability Director and Liaison for the STARS program. “Being able to showcase the progress of the university as it pushes to become more sustainable is a very exciting thing for someone in their first year as director.”

Sustainability, or the avoidance of the depletion of natural resources in order to maintain an ecological balance, became an integral part of Miami’s mission in 2010 when it established its first  Sustainability Commitments and Goals. Many of these goals were met by 2015 and a new set of goals was drafted in 2016.

In a letter to the STARS Steering Committee in February, Miami President Gregory P. Crawford outlined the following ways that the university has met and exceeded these sustainability goals:

The most significant factor in this new STARS rating was the university’s Lean business strategy, a systematic method for the elimination of waste within processes. In 2017 alone, 153 Lean projects were completed by Miami, 40% of which specifically identified “Going Green” as a goal. Through the completion of these programs a total cost avoidance of $2,478,728 and a total cost reduction of $841,863 were achieved. Since 2008, Miami has reduced carbon emissions from coal, natural gas, and reduced purchased electricity by 44% and reduced energy consumption by 36% on a square foot basis. This exceeded a sustainability goal that was set to be met by 2020.Total carbon emissions have been reduced by 30% and this past February marked the third fiscal year where no coal was burned on site at the university.From October 2016 to March 2018, 11 buildings on Miami’s campus received LEED Certification, the most widely used green building rating system in the world, with two buildings ranked at a gold level and nine at a silver.Eight acres of land that had previously been farmed using traditional techniques are now farmed using organic techniques by Miami’s Institute for Food farm.From 2016 to 2018, the number of parking passes issued for entire university dropped by 9%, including Miami’s regional campuses.

Colleges and universities that participate in the STARS program are re-evaluated on their sustainability efforts every three years and are ranked by a point system that ranges from zero to 100.

With the STARS rating system, sustainability is measured in a variety of ways. University academics, administration, campus engagement, and operations all play important parts in an institution’s score.

The new rankings were announced May 20. In three years, Miami’s sustainability will be reevaluated through STARS. Miami will now look forward to attaining a platinum rating, the STARS program’s highest honor, Sizemore said. Of the over 300 colleges and universities that participate in STARS across the country, 120 have gold ratings, but only six have earned platinum, he said.

“It’s going to be a wonderful three years improving upon this and planning how we can move towards the next rating,” Sizemore said. “Sustainability can be taught in every discipline. At the end of the day it isn’t about points. STARS provides us with a blueprint and it’s up to us to learn from it and move ourselves toward change. Together, we’re building a more sustainable world.”