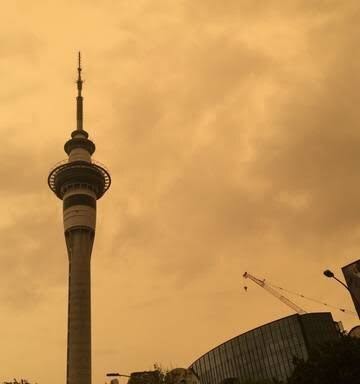 Although it is thousands of miles from the Australian wildfires, the air above the Sky Tower in Auckland, New Zealand reflects the fiery orange of the blaze. Photo by Curtis Herzog

The worst wildfires in Australian history are raging on the far side of the world from Oxford, but two Miami students studying in Australia and New Zealand this winter report they can actually breathe the smoke and see the heat from the blazes.

Since September, the wildfires that have burned over 12 million acres of land and also  have killed at least 24 people and up to 800 million animals in New South Wales, and as many as a billion animals nationally, according to a report by Prof. Chris Dickman at the University of Sydney.

The fires are believed to have sparked from a drought that began in 2017, according to Insider. Due to the extremely dry environment, once the bushfire season began this past October, the wildfires were able to grow and spread quickly.

Paul Filonowich, a junior at Miami studying bioengineering, is part of the International Business and Marketing study abroad program in Sydney.

Filonowich, who is taking classes while also exploring the country, spoke to the Observer this week. The group has gone on walking tours of the city, checked out the zoo, visited art museums, spent time at the beach and shopped around the city. They haven’t had to make any alterations because of the fires, he said.

“We’ve found plenty to do without leaving Sydney, but we do feel a little trapped with all the restrictions,” Filonowich said. They have been warned not to go or cross through burning areas, like the Blue Mountains, where fires are burning, he said.

Filonowich says that even in Sydney, the air quality has been unpredictable.

“One day might be blue sky, sunny, and beautiful, and the next has reduced visibility and smells strange because of the smoke that blew in,” he said. “We’ve been discouraged from jogging, hiking, or biking outside on these days to limit smoke exposure.”

More than 2,000 miles away from the fires, in neighboring New Zealand, the blazes cast a glow in the skies, said Miami student Curtis Herzog. Herzog is there participating in a Miami study-abroad course called Sport, Commerce & Culture in the Global Marketplace: New Zealand. The program examines the realm of sport in the country and how that relates to society as a whole.

Herzog, a junior on the trip, and the rest of the group went to visit Auckland’s Sky Tower last week. When they came out of the tower, the sky had turned a hazy orange color from the fires. It stayed like that until the following morning, he said.

“It wasn’t like smog or anything it was just colored,” he said. “It was like crazy and so sad.”

Herzog has also seen efforts around Auckland to support the people of Australia. At a restaurant on the harbor, people set out a collection container for donations, with a photo of a kiwi, a koala and a heart that said “please help our neighbors.”

“I’ve seen stuff like that in a couple of different places,” Herzog said. “So there’s a noticeable effort to aide them financially and help them with all that.”

With Australia’s fire season expected to last through the summer, people are looking for ways to help.

‍Donations can be made to the Australian Red Cross Disaster Relief and Recovery Fund; GIVIT, an organization that pairs donated goods with products that are needed by victims; the Australian Salvation Army, which asks for monetary donations instead of items; directly to local Australian firefighting brigades; the Country Fire Authority’s (CFA) Bushfire Disaster Appeal fund; BlazeAid, which helps rebuild communities affected by natural disasters; and to the Port Macquarie Koala Hospital which has helped treat koalas injured in the fires.