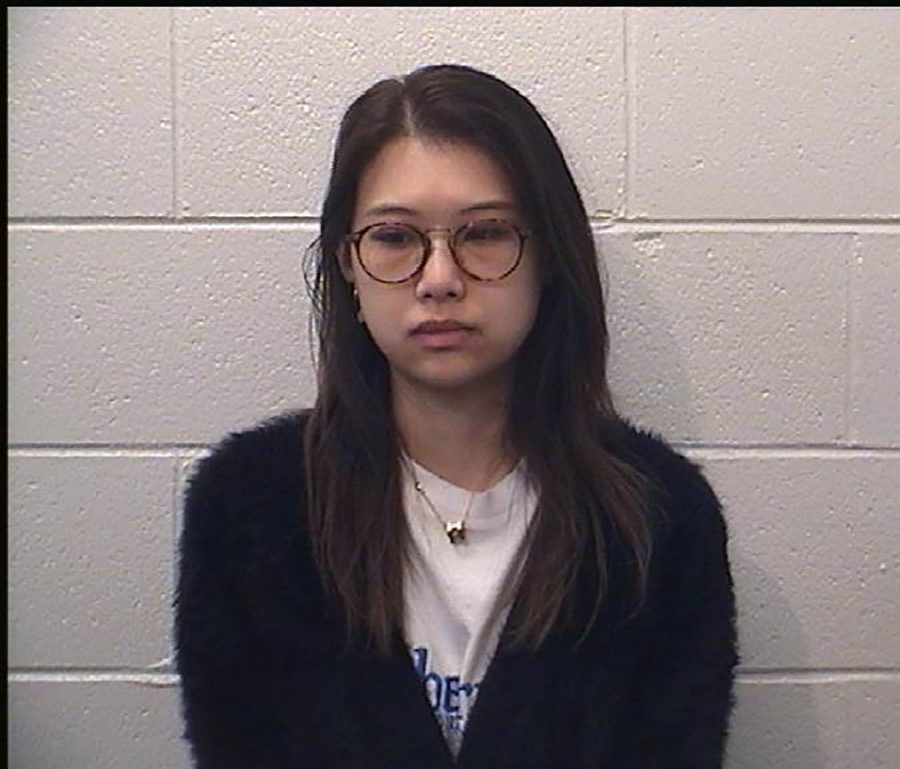 Zichang Li, after being charged with misdemeanor cruelty to a companion animal. Photo provided by Oxford Police

Miami student Zichang Li pleaded not guilty Thursday to a charge of cruelty to a companion animal after police said her pet rottweiler had been locked in a cage in her apartment without adequate food or water for weeks.

Li, 21, a Chinese international student, has surrendered ownership of the dog, which now is receiving veterinary care. The case was continued in Oxford Area Court Thursday for a pre-trial hearing Oct. 31. She remains free on her own recognizance.

The male dog, Dollar, was significantly underweight, but has a good prognosis, said Angela Schatzle, the Oxford public safety assistant who filed the charges. Schatzle, whose duties include serving as one of the city’s animal control officers, testified Thursday that police had received a complaint from the management of the Oxford Commons apartments, where Li lives, that the dog was not being properly cared for.

Schatzle wrote in the police report that she visited or attempted to visit the apartment nine times between Sept. 13 and Oct. 18, to follow up with Li on the dog’s care. At the initial visit in September, she said she had advised Li on Ohio animal care laws and had told her to take Dollar to a vet, which she did Sept. 14.

At that time, the dog weighed 55.2 pounds. The vet sold Li some dog food and gave her a feeding schedule for the dog.

When the dog was confiscated Oct. 18, its weight was down to 45.2 pounds, Schatzle testified.

Li said there was dog food still in her apartment to feed the rottweiler when he was confiscated. The food could have been food not prescribed by the veterinarian, but according to the police report, the veterinarian said Li had only purchased one bag and would have run out well before Oct. 18.

Li never scheduled the follow-up appointment with the veterinarian that was supposed to be one month after the initial appointment, according to the report. The feces Schatzle observed Oct. 18 made her think the dog was sick, she testified, leading to the dog’s confiscation.

“I don’t think that the dog would have had the nasty putrid feces without it being sick,” Schatzle said.

When Li returned to China over the summer, she claims to have left the dog with a student caretaker, who took care of several other dogs. She said when she reclaimed the dog at the start of the semester, it appeared to have lost weight. 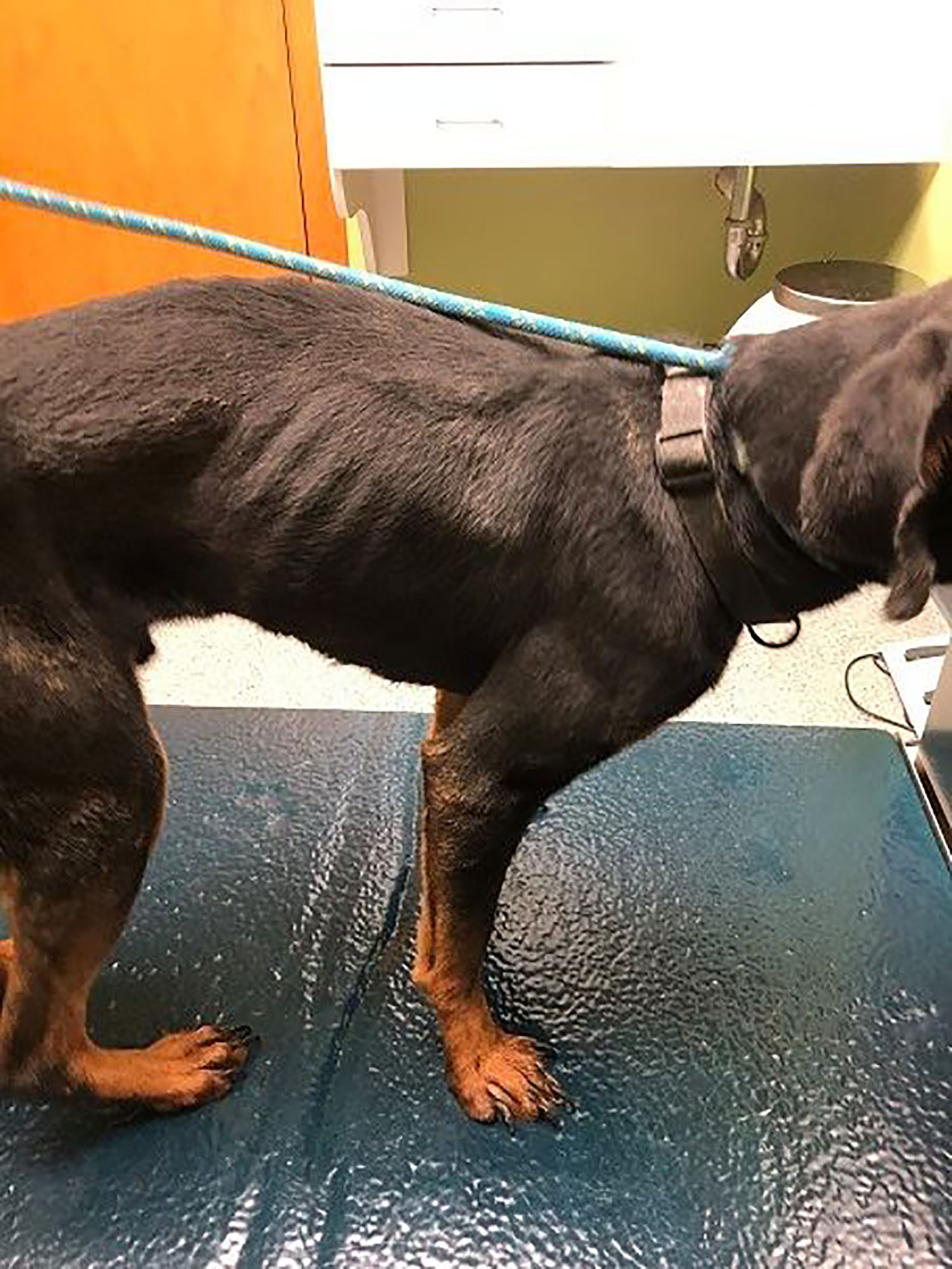 Dollar, the one-year-old rottweiler, was significantly underweight when police charged the owner with neglecting him. Photo provided by Oxford Police

According to her, she takes the dog out of its cage and for walks when she’s home, but she’s frequently away at classes, and Schatzle would often come at inconvenient times when there happened to be waste in the dog’s cage. Schatzle did indicate in her police report that the feces she had observed in the dog’s cage during her Oct. 17 visit had been removed the next day.

The police report also indicates that Li said she attempted to put her dog up for adoption with Animal Friends Humane Society (AFHS) in Hamilton–the same shelter where the dog is now– in late September, but was turned away because the shelter said it was too full.

Li thinks the charges are unfair because she wasn’t purposely harming the dog.

“I wasn’t trying to hurt the dog, and nobody (in the courtroom) is saying that,” Li said.

Li agreed to surrender the dog after she said she could not afford to pay the $1,500 bill for Dollar’s veterinary care and boarding while the case is pending. Oxford police transferred the dog to the AFHS, where it is being cared for.

While this sort of mistreatment in Oxford isn’t exactly common, there have been similar cases in the past, Schatzle said.

“I’ve only had one other case with regards to something of this nature, back in July of 2018,” Schatzle said.

“There were six dogs that were left in a rented apartment and the owners had returned home to China, and had arranged for a caretaker to take care of the animals.”

Schatzle said that the caretaker was charged, as per Ohio law.

She’s sometimes called to conduct these welfare checks, just like the one that led to Li’s charge. Schatzle said OPD has worked to train apartment managers in town to look for signs of neglected animals around students’ move-out dates. She said it behooves the managers to check, as animals can easily lead to property damage.

But the animal isn’t always in danger.

“I received a call, for example, of a dog that was tied out without water,” she said. “When I went to check with the dog, there was a pillar that the lead was tied to, but there was a water bowl that could not be seen (because it was obstructed).”

Additionally, Schatzle does work dealing with wild animals, such as raccoons, possums, squirrels, birds, and skunks.

“(We deal with animals that are) sick or injured, stuck, or they are living somewhere where a human doesn’t want them to be,” Schatzle said.

And finally, Schatzle does work to reunite lost dogs with their owners. She and her fellow public safety assistants will check tags, search for microchips, and scan social media.

“What I find interesting about Oxford is I might go a month without receiving a call for a stray dog, and then I have four dog days, where I have to pick up and release four dogs,” Schatzle said.

“So, you can go from not having much activity to having a lot.”