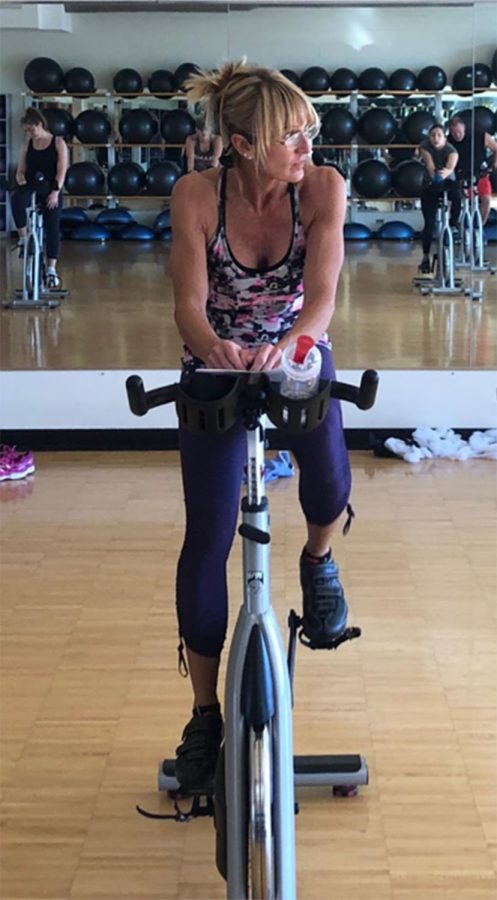 Kelly Halderman keeps up a running commentator as she leads a spinning class at the Miami Rec Center. Photo by Patrick Donovan

Kelly Halderman’s wispy blonde bangs sway across her face, as she enlightens the patrons of her morning spin class with another entertaining anecdote from her weekend.

Huff. Huff. Gasps of exhaustion escape from the riders, but Halderman breathes perfectly normally as she pedals  on the metallic bike at the front of the exercise room in Miami’s Rec Center. A Cardi B song blasts from overhead speakers.

She steps off her bike, peers at her sweating students through oval-shaped glasses, and describes how her husband needs to take her to Ireland for their 30th wedding anniversary next year. Faint laughter circulates. She cackles loudly after saying her only contribution to the trip will be to look good. She also mentions how her husband “married up in looks.”

Halderman, has worked at the Rec for 23 years. She teaches a slew of classes including spinning, total body tone and step. She maintains a perfectly toned body with sculpted arms and thin legs.

Her workout sessions attract a mixed group of Miami students and Oxford residents. She keeps the diverse demographics motivated and entertained throughout her classes using stories, positivity and laughter.

Her exercise journey started at the YMCA in Middletown, Ohio when she was 23 years old. Halderman merely attended the gym to stay fit. One day, an instructor abruptly quit. The YMCA management approached Halderman and asked her to step into the teaching role. With nothing to lose, the free-spirit enthusiastically agreed. She didn’t anticipate her spontaneous decision would turn into a career.

Now calling the Miami Rec Center her place of employment, Halderman captivates her audience with her distinct teaching style. An animated and colorful story-teller, Halderman has no trouble sharing intimate details of her personal life with workout attendees. During any given class, she enlightens her patrons with tales of her husband, what she drank over the weekend, living on a farm, her opinions on celebrities and even singing songs that are playing during the class.

“I feel like I try to talk about things that are going on in life,” Halderman says. “People can relate to what I have to say.”

The fitness guru said she loves Miami students and Oxford residents alike. Halderman respects the college age-group and admires their open-mindedness and free-spirits. She mentions how the energy Miami students emit is so contagious for her.

Ellie Pierce is a junior who attends Halderman’s group fitness classes. The student says her favorite part of these classes is the encouragement provided by Halderman and the instructor’s ability to bring others together.

“It is positive and upbeat,” Pierce said. “She does partner work where she encourages you to meet someone new.”

Shannon Speed, assistant fitness director at the Rec, is Halderman’s boss. The duo boasts a friendship outside of work and know each other well. Speed says Halderman’s multi-faceted personality enables her to connect with a wide demographic.

“She is a young person at heart, but also is a role model to youth,” Speed says. “In a group fitness environment, you have to connect to the instructor. People connect to Kelly.”

Sara Foley also works at Miami’s Rec as a group fitness instructor. Halderman trained Foley and showed her the ropes of being an instructor. Foley says Halderman’s witty banter and expressive personality help create a fast-paced and high energy environment that takes people’s minds off the task at hand — working out.

“She makes people feel so welcome,” Foley says. “She knows people want entertainment and don’t want to think about the group fitness. She gets her fans to bring other friends back to her classes.” 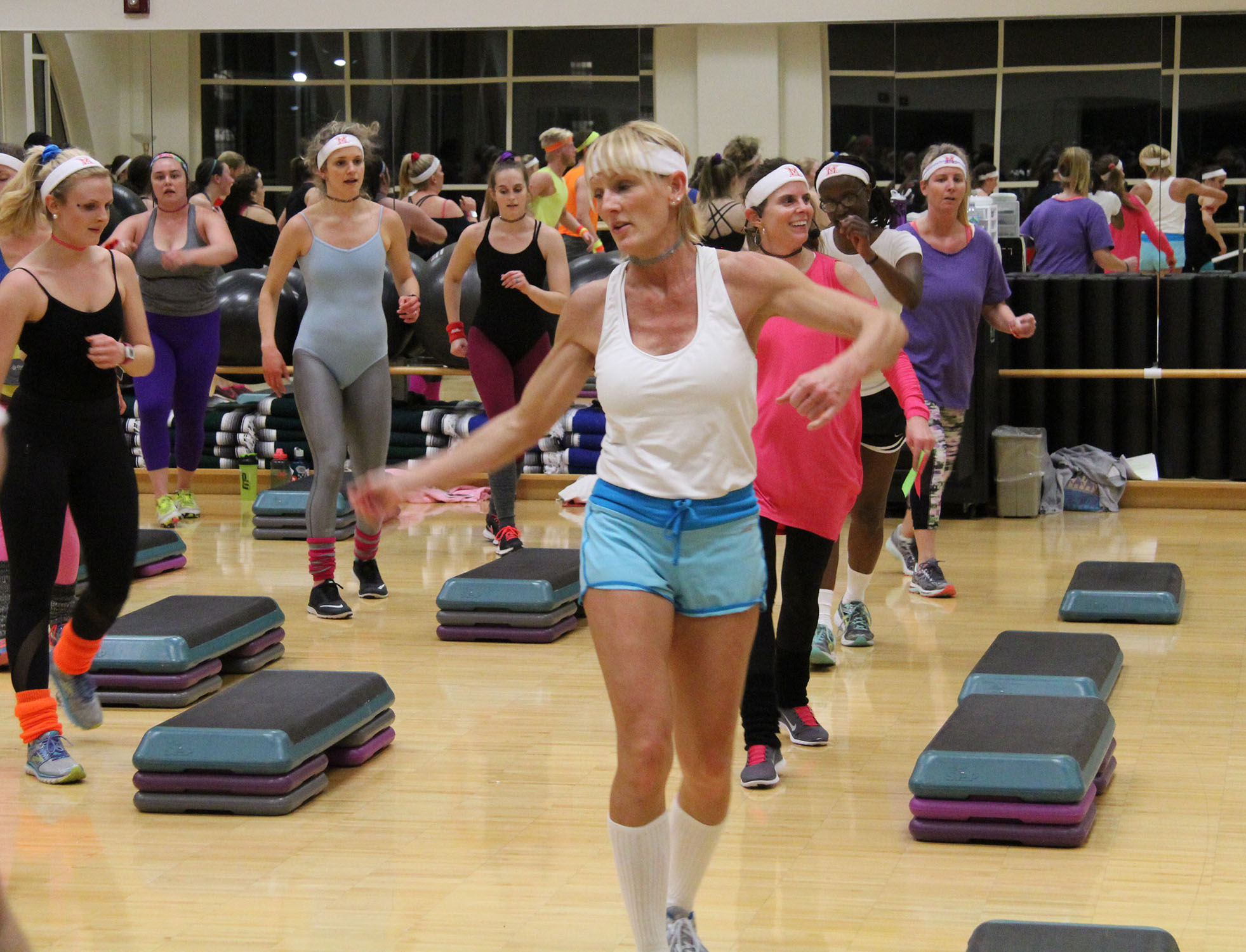 Kelly Halderman teaches up to five fitness classes a day to students and Oxford residents at the Miami Rec Center, and she has been doing it for 23 years. Photo provided by the Miami Recreation Center

When the mom of two isn’t leading sweat-sessions on campus, she can be found on her local 150-acre farm complete with horses, corn and soybeans. The farm serves as a tranquil retreat and provides a private getaway. Her two boys, now in their 20s, are her pride and joy in life — and she says her protective and motherly side comes out around them.

And her morning routine? Halderman hurls herself out of bed at 8 a.m. and sticks to the same daily breakfast — peanut butter and Diet Coke. She knows this beverage dehydrates her and may not be the best pre-workout choice, but the instructor says she’s addicted. Even with as many as five workout classes throughout the day, Halderman says she has to consume two diet sodas every morning.

Woosh. Woosh. Back in Halderman’s spin class, the flywheels of the metallic bikes churn loudly with each pedal stroke. A glimmer of sunlight shines through the curved glass windows in the wood-floored workout space. Patrons from the class dismount from their bikes and grab towels to clean them off. An Oxford resident and a student laugh about something together at the side of the room. The riders appear relieved and content to conclude their workout. Halderman shares her final story about getting a new car horn because she wore the old one out. She takes her hand and presses it in a horn-honking motion.

“I need a big-ass semi horn that goes ‘BEEEEEEP,” Halderman says. “I can’t deal with bad drivers on the road.”

The class has a last laugh.